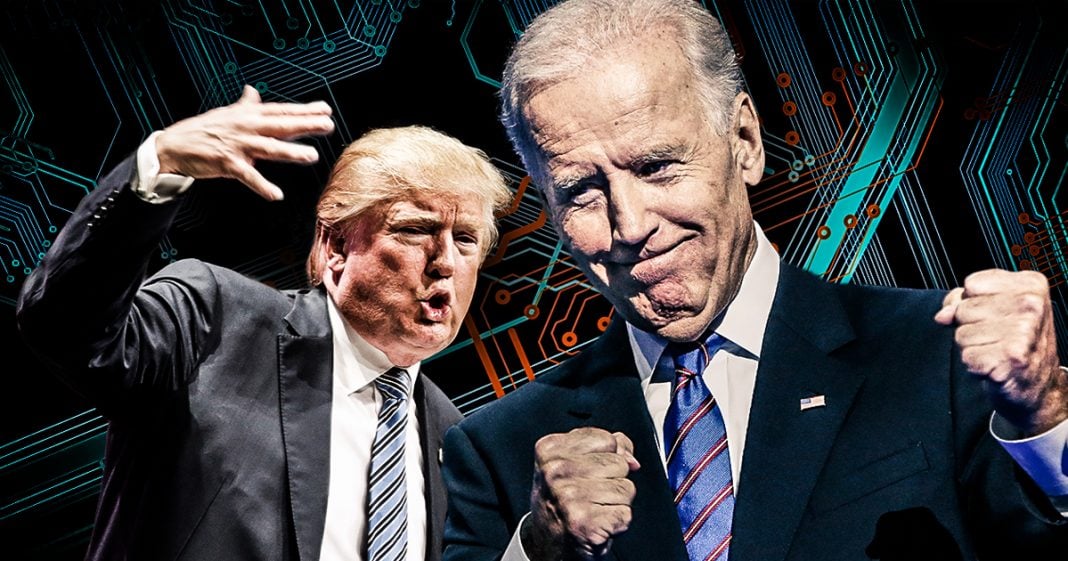 Just when you thought that modern political discourse couldn’t get any less civilized, the President of the United States got on Twitter this morning and threatened to beat up former Vice President Joe Biden, promising that Biden would go down “fast and hard, crying all the way down.” There is something seriously wrong with Donald Trump, as Ring of Fire’s Farron Cousins explains.

Usually, if somebody says, “Who would win in a fight, Donald Trump or Joe Biden?” You’d probably think that they were just speaking hypothetically. Apparently, based on the current state of political discourse in the United States, that fight may soon become a reality. Recently, during an interview, Former Vice President Joe Biden was asked if he would like to debate Donald Trump and Joe Biden instead said no referencing his Access Hollywood tape and the way he treats women. He said, “If I were in high school, I would like to take him out back behind the gym and beat the hell out of him.”

Well, obviously, Donald Trump is not the kind of guy that’s going to let somebody say something without him say something back, so on Thursday morning, 5:19 AM Central Time, Donald Trump tweeted out the following: “Crazy Joe Biden is trying to act like a tough guy. Actually, he is weak both mentally and physically and yet he threatens me for the second time with physical assault. He doesn’t know me, but he would go down fast and hard crying all the way. Don’t threaten people, Joe.”

That was the tweet that the President of the United States sent out on Thursday morning basically saying that, “Don’t threaten people, Joe, but I’m going to beat the hell out of you and make you cry.” The same guy who nearly crap his pants when a bald eagle went to bite his finger. The same guy who got deferments from Vietnam for bone spurs because his feet hurt thinks he is such a tough guy that he could beat up Joe Biden.

Now, I’m no huge fan of Joe Biden, but I think if it came down to a fistfight between the two, I’m pretty sure Joe Biden could beat Trump up without any second thought. Donald Trump is an out-of-shape, overweight, poor-eating, non-exercising human being. Yeah, I think Joe Biden has got a little bit on him there, but that’s all beside the point.

The fistfight that’s never going to happen is not what this is about. This is about the fact that we have clearly a sociopath sitting in the White House who thinks it’s perfectly cool to get on Twitter and threaten to beat people up two days after his wife did a round table with members of the tech industry talking about the problem of cyber bullying.

I don’t know about you, but I’m pretty sure getting online and threatening to beat somebody up and make them cry would fall well within the realm of cyber bullying. The president is a cyber bully. Of course, he can’t be a bully in the real world because he’s a coward as most bullies are, but this is the guy who is running the United States.

This is the guy that’s supposed to be out there meeting with other world leaders trying to work on very serious problems. Instead, he wants to use his time, his executive time so he doesn’t have to work. Threatening the Former Vice President of the United States. Now, this doesn’t excuse Joe Biden saying he wanted to beat the hell out of him. That’s just as irresponsible as what Donald Trump has done, but the media is loving this, right?

I mean you’ve got a former vice president, the current president threatening to go into a schoolyard, have a fistfight. Meanwhile, there’s actual real issues that need to be discussed in this country and yet we can’t do that because President Dumbass only wants to work on addressing the people who are mean to him.