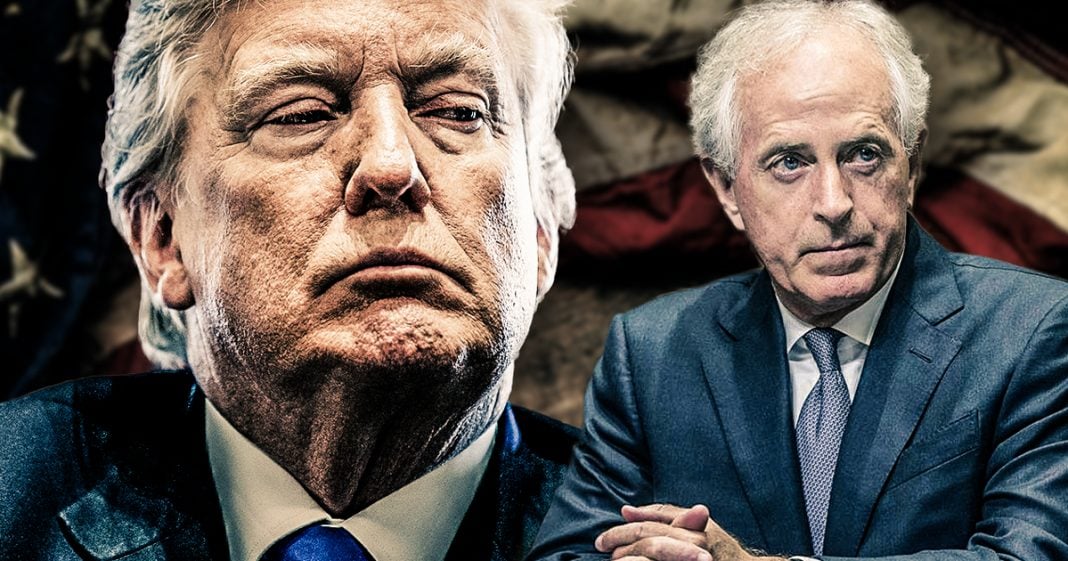 Republican Senator Bob Corker accidentally admitted why members of his Party refuse to stand up to Donald Trump this week, when he said that conservative voters (the most hardcore and extreme ones) only want to see loyalty to Trump. This means that the entire country has to suffer as a result of Republicans pandering to the smallest fraction of their Party because they don’t want to make waves. This will cost them dearly in the midterms, as Ring of Fire’s Farron Cousins explains.

Republican Senator Bob Corker let it slip this week why members of his party refused to stand up to Donald Trump. During an interview with the Washington Examiner, Bob Corker said that when he’s out on the campaign trail, when he’s talking to people, they’re not asking about issues. They don’t care about what’s happening in the world. They’re only asking him, are you with Trump or not? And they want to hear that he’s with Trump.

And the same is true for Republicans all over this country. It’s no longer about the issues. The Republican base, the hardcore alt-right part of the Republican base, a small fraction of it, just wants to know if you’re loyal to Trump or not because that’s all they need in order to vote for you. And that’s why these spineless, disgusting Republican pigs refuse to stand up to Donald Trump or to demand deeper investigations into what this man has been accused of doing, whether its with the sexual assault, the harassment, the defamation, the collusion investigation. They won’t touch any of that because, if they do, they could lose a very tiny small little fraction of their voting base. These Republicans, by Bob Corker’s own admission here, are more beholden to the alt-right, to the one percent of one percent of right wing voters than they are to the American public.

Donald Trump is inflicting very real damage on this country. That’s undeniable. And he’s doing it with the help of the Republicans. He couldn’t do everything that he’s done without their complacency on this. But he’s doing it anyway because they’re going right along with him. They don’t want to stand up to him. They don’t to tell him that his idea for a border wall is stupid. They don’t want to tell him that you can’t ban Muslims from entering the country, not because they don’t believe it or because they’re against it, but because they don’t want go against him, because then they have to go answer to those crazy people in their base, the crazy people who stand up and say, “Why did you go against Donald Trump? Now I can’t vote for you because I’m an idiot voter.” They’re afraid of those people. That’s what this is about.

Bob Corker’s little admission here is about more than, you know, just policies or what his base is feeling right now. It’s about what’s going to happen to these morons when they go back for re-election this year and get their asses handed to them in the midterms, because moderate Republicans, the few Republican people out there that don’t believe in the crazy things that the alt-right believes, they just don’t want government interference in things. They’re not going to vote for these crazy Republicans again. They’ve already said that according to polls. Democrats across the board have an eight-point advantage in generic polls heading into the midterms. And, yeah, that advantage has slipped a little. But it’s still eight points. Republicans understand that. They know they’re in trouble but they refuse to do anything about it, because doing something about it means you have to stand up to Donald Trump and then, god forbid, you’re going to lose all those racist voters from the alt-right.