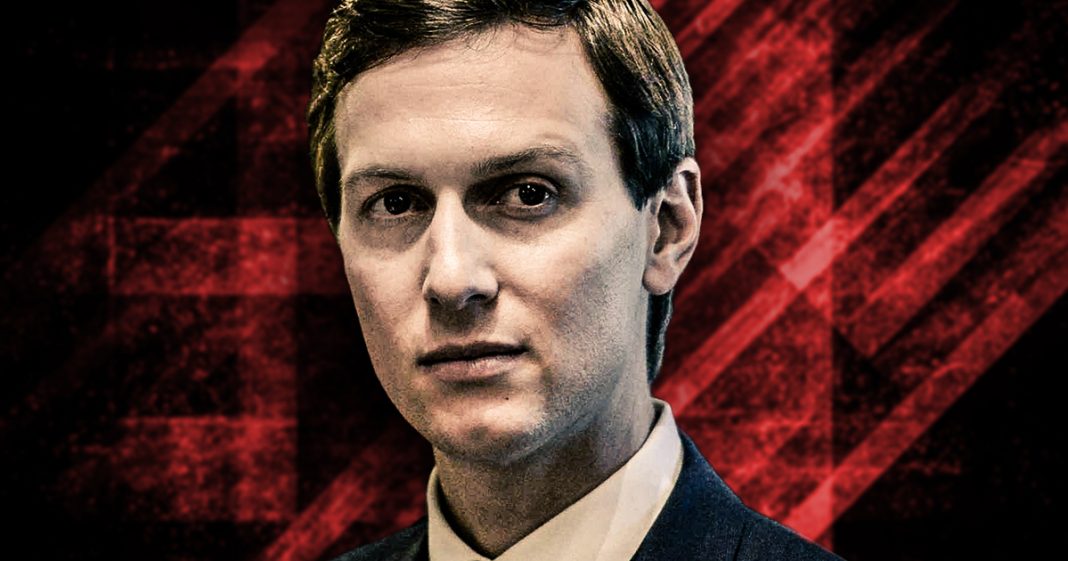 Jared Kushner, a White House adviser and son-in-law to President Trump, is now officially under investigation by three separate entities for completely separate matters. The latest investigation involves the false paperwork that Kushner filed with the city of New York so that he could kick rent-regulated tenants out of his apartments and skirt regulations on renovations to the buildings. This man belongs in prison, and yet he’s still serving at the President’s side. Ring of Fire’s Farron Cousins discusses this.

Jared Kushner, White House Advisor, son-in-law to President Donald Trump, husband of Ivanka Trump, is not involved in his third potential criminal investigation since joining the White House. Let’s go back in time, let’s take a look at the first two. The first one is obviously the Mueller investigation, that has focused very deeply on Jared Kushner, so he has that. There was the recent announcement that the IRS is looking into some of his holdings to find out if they’re on the level, because they believe there could be potential criminal activity there.

The most recent investigation, that was launched just yesterday, is from the New York City Regulators from the Department of Buildings, that are investigating Jared Kushner for potentially filing false data, which, therefore, led to renovations, and skirting of regulations based on the fact that he claimed he get no rent regulated tenants in his properties.

Now, I’ve explained this scam before, but I’m going to do it again real quick. Jared Kushner, while he was in charge of Kushner Companies, filed false paperwork with the city of New York saying that his buildings, his apartments buildings he had just bought, had no rent regulated tenants. Because of that, he was able to kick most of these people out, he could raise their rents, but he could also perform renovations on the buildings with fewer regulations to have to work with, meaning he could do it a little cheaper, because he didn’t have to comply with so many codes for rent controlled tenants.

By lying about this, he saved a ton of money, he then flipped those buildings, and in most cases, sold them for about twice as much as he paid for them. Now, New York City has said “Yeah, hold up. You’ve been accused of falsifying at least 80 different forms that you have submitted that you then used that falsified data to screw over tenants, screw over investors, screw over regulators, so we’re going to investigate you now, and find out what exactly happened.” Yes, when I say Jared Kushner did this, I mean that he was running Kushner Companies at the time that this paperwork was filed, and as the top of the food chain there for the company, yes, he is directly responsible for this.

Jared Kushner belongs in prison. Instead, he gets to have the President’s ear. He gets to go travel the world, and meet with world leaders, and make all kinds of deals for his businesses, even though he’s being investigated by three separate entities to find out just what in the hell he has been doing all of these years. That’s not even including the fact that we found out yesterday, from The Intercept report, that the Saudi crown prince boasted that he had Jared Kushner in his pocket.

This is the same crown prince, that if you read the piece by The Intercept, a very long story, I highly recommend it, but anyway, this is the crown prince that overthrew the other crown prince in kind of a semi-violent coup that most of the people didn’t support, but Jared Kushner did. Yada, yada, yada, Jared Kushner’s in deep with Saudi Arabia, and they believe that he’s their guy.

We’ve seen reports recently showing that John Kelly has allegedly been tasked by Trump with finding a way to get Jared and Ivanka out of the White House. But, I would think that the lone fact of being investigated by three separate entities at this point would be more than enough for Trump to have pretty good reason to get rid of Jared Kushner from the White House. But, it won’t happen. Unfortunately, what’s probably going to happen, is that he’s probably going to be hit with indictments, or hit with criminal charges, and if his father is still president at that point, he’s most likely going to be pardoned.

But, hopefully, the damage that this does to his reputation in both the political, and business worlds, will lead to his ruin. I’m not saying that because I hate Jared Kushner, or want him to live a horrible life. I’m saying that, because that’s what justice is all about. He made a fortune scamming people, and screwing them out of their homes. It’s only fair that the legal system gets to do the same thing to him.