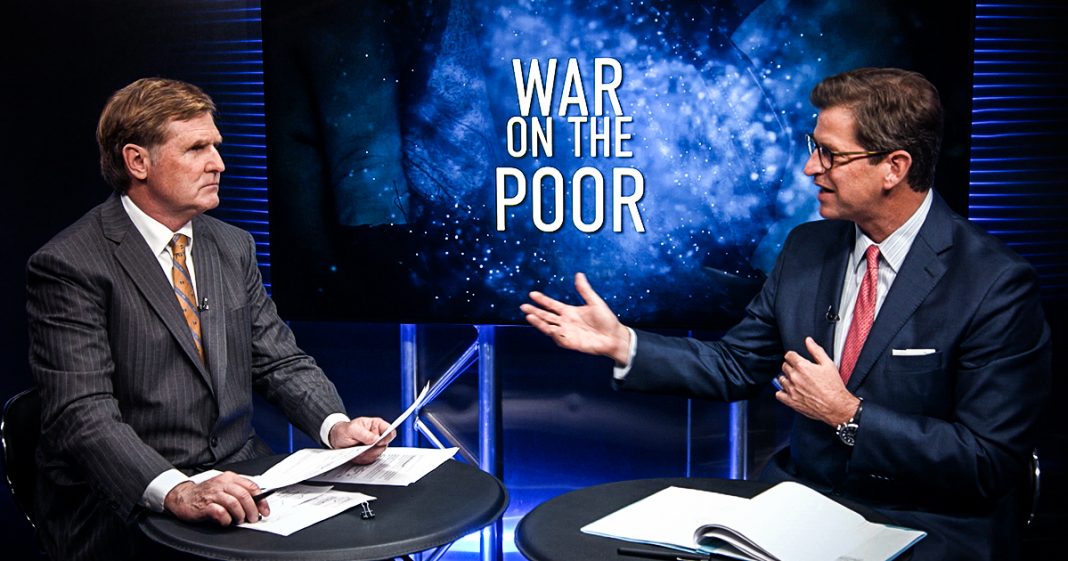 The proposed 2019 federal budget includes drastic cuts to the legal system that could result in fewer public defenders being available to defend indigent defendants. This means that more and more people will be put in jail just because they couldn’t afford a lawyer – to put it bluntly, they’ll go to jail for being poor. Ring of Fire’s Mike Papantonio and Peter Mougey discuss this.

Mike Papantonio: Welcome back to Ring of Fire. I’m Mike Papantonio here with Peter Mougey. The proposed 2019 Federal Budget includes drastic cuts to the legal system that could result in fewer public defenders being able to defend indigent defendants. This means that more and more people will be put in jail just because they couldn’t afford a lawyer. To put it bluntly, they’ll go to jail for being poor. But it’s more involved than that, it’s not just the public defender kind of problem. It also has to do with people that need all types of legal help when things like divorces and custody … There’s a whole chain of events that take place in people’s lives every day. But what if you don’t have access to it, what if there’s just no way that you can afford a lawyer? Well, what ends up happening is you become a victim. What’s your take on this? These are big cuts.

Mike Papantonio: These are big-

Peter Mougey: There is one-

Peter Mougey: … story out of this that I really liked. It set the framework in this stage for why the LSC, Legal Services Corporation, which helps provide legal services to people who can’t afford it, but the one story was the example out of Delaware where they had received a lot of complaints about a specific landlord. That landlord was running homes for people that had mental challenges and were mentally handicapped in some way. What he was doing … They didn’t have heat, they didn’t have hot water, they didn’t have … The sewage was backed up in the basements. What LSC did was they investigated these-

Peter Mougey: That’s right. They investigated the complaints, and they ended up going after the landlord because he was taking money, 4 or $500 a month, he had 15 to 20 houses, stacked people in them. He rented out the bedrooms for disabled people, and they were literally living with no heat, no hot water and sewage, charging them $500 a month and they had no voice. So what LSC gave them was a voice. These folks couldn’t afford lawyers-

Peter Mougey: … but it gave them a voice. There are stories like this all over the country.

Mike Papantonio: Well, yeah, there are. I mean, look, here’s the thing. You’re talking about consumer fraud where they have … They want to make a claim for consumer fraud, child custody, domestic abuse, divorce, termination of public benefits such as welfare or food stamps, disability benefits, Social Security benefits, somebody has to represent people who can’t afford an attorney. Now-

Peter Mougey: We can strip away all the regulations-

Mike Papantonio: … is … There’s a pro bono system that our firm does. We do a lot of pro bono and have for a long time. But that doesn’t solve the day … Pro bono is we just agree to do work for no charge. But you can’t really get at this problem unless you have a system set up. In 1974, this system was set up and they said “We’re going to have legal services where we have lawyers and paralegals and social workers and investigators that are going to take care of these claims for people that just can’t afford to pay for an attorney and that they can’t find pro bono lawyers that’ll do it for them.”

So the point is this … Here’s where the story, to me, is really ugly, Peter. The Trump administration, of course, and the Republicans that are just falling in line with the Trump administration argument here, they basically wanted to … They want to give this organization one check for $33 million, and here’s what they say, “One shot, $33 million, use the money to close your operation down.” That’s basically what they’re saying to them. They asked for funding … Last year or year before that, they came in funding about $380 million that pays for all of this all over the country, which is … The staff and the lawyers are paid just minimum wages, and so they said “Well, we don’t want to raise it. We’re going to let you go through this year but at the end of this year, be ready because we may give you one more check for $33 million and you’re going to have to close down your entire operation.”

Peter Mougey: It’s a sad story. I’ll tell you, I love the quote that said there’s a justice gap. You’re a big company, not main street America, you can afford a lawyer. Main street America and those below can’t afford legal representation. I love Oklahoma’s model. Think about this for a minute. It’s not just …. and this isn’t really criminal. Oklahoma’s taking the money from the Federal Government and they embed lawyers where people congregate, so domestic violence shelters, to give those people access, the women, access to the litigation system. They can go get a restraining order. It helps them protect themselves. Health clinics, substance abuse clinics, access to lawyers to help people rise up-

Peter Mougey: … from the bottom.

Mike Papantonio: … there is some of that. I mean, they have lawyers if you … Lawyers graduate out of law school, like both you and I do, with huge bills that we had to pay off. They give you the opportunity to say “You want to go to work for say a tribe, an Indian tribe, you can do that for a couple years and we’ll cut back on what you owe us.” You could do this the same way with attorneys. You could simply say “Look, you’re going to have to work for two years in legal services to pay-

Peter Mougey: And we’ll wipe away your debt.

Mike Papantonio: … this back and wipe away your debt,” because … Let me just tell you, there’s 1.7 million people that used this last year and it’s going to get a lot worse, and here’s the requirement. In order to justify being able to use the services, you have to be making $15,000 a year.

Peter Mougey: These are people with no voice.

Peter Mougey: It gives them a voice and now we’ve cut off funding and said “You have no ability to consult or find a lawyer.”