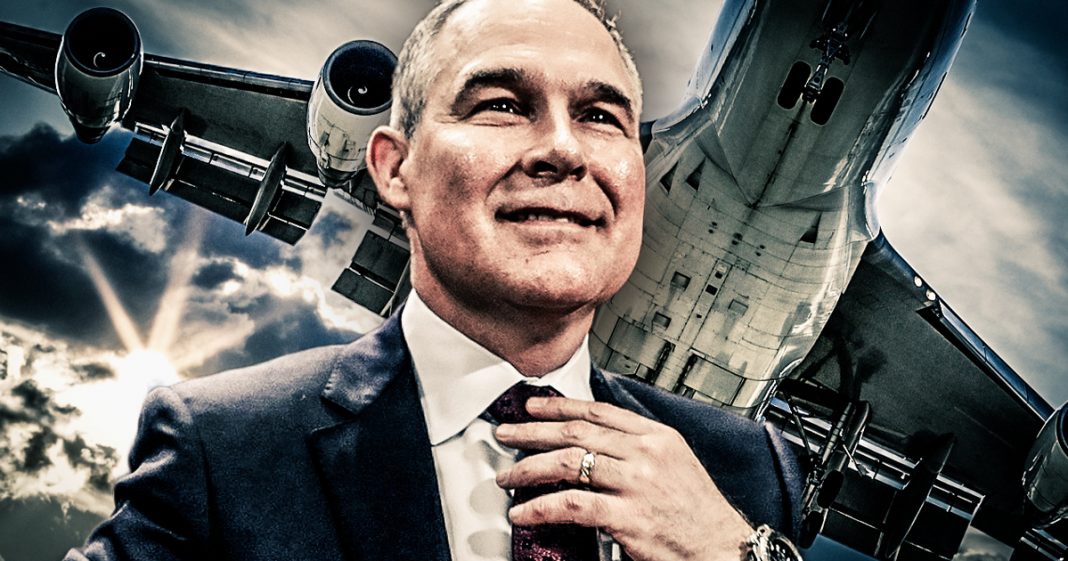 The spending scandals surrounding members of Trump’s cabinet only seem to be getting worse, and the latest revelation is that EPA director Scott Pruitt took a trip to Italy that cost US taxpayers $120,000. This comes at a time when the administration is seeking to slash the budget of the EPA, but apparently that doesn’t mean cutting unnecessary travel expenses for these government moochers. Ring of Fire’s Farron Cousins discusses this.

The travel expense scandals kind of taking place in the White House right now only seem to be getting worse. This week it was reported that EPA Director Scott Pruitt took a trip to Italy at the expense of US taxpayers to the tune of $120,000 for one guy to go to Italy for God knows what reason on the government’s dime. $30,000, according to reports, was for the security detail that had to follow Pruitt around as if he’s some kind of hugely important figure. $30,000 to protect this jack ass. But, $90,000 was spend on flights, hotels, and food. $90,000 just for him, for his travel not including security detail.

This actually comes at a time when the federal government, the Republicans and the Trump administration, want to slash the EPA’s budget so badly that the agency cannot do its job, but apparently those budget cuts are going to affect Scott Pruitt’s travel budget in the least. This is an egregious abuse of power happening in the United States, and it’s not just Pruitt, it’s all of them. It’s Kellyanne Conway, it’s Steve Mnuchin, it’s Ben Carson, it’s Betsy DeVos. They are all involved in these spending scandals, and it has to come to an end.

You know, whatever happened to Republicans being super pissed off, at least the Republican voters in this country, about government spending? You know, they railed endlessly when Obama would go play golf and talk about, “Oh, the cost of that.” Yeah, well guess what? Trump’s played golf more than Obama did in eight years, in one year. Now we have all of these spending scandals where our tax dollars are going towards these people to just travel the globe on the government’s dime, not doing any real work, certainly not doing any real work when they’re sitting in Washington, DC. This is an all expenses paid luxury vacation for most of these people.

Let’s be honest here, most of these people; Pruitt, Mnuchin, DeVos, Carson, they’re already rich. They’re already in the top 1% in the United States. They don’t need to be spending our money, money that could be going to teachers or police officers or any kind of infrastructure improvements, but they’re spending that instead on food and flights and travel and vacations and all kinds of crazy stuff, like to sit on the roof of Fort Knox to watch an eclipse. These people are stealing from the American taxpayers, and every single one of them should be immediately removed from office and thrown in prison, and at the very least, forced to repay every single cent that they have taken from American taxpayers.

They should be barred from serving in the federal government because they are nothing more than common thieves, just like Donald Trump himself. It’s no surprise that that is what he’s packed his cabinet with. People who’ve made tons of money throughout their lifetime, but that’s still not enough for them. They could be millionaires and billionaires, but they still want to steal money from my pocket, from your pocket, and from the pockets of every single American citizen, because God forbid they have to pay their own way in life.