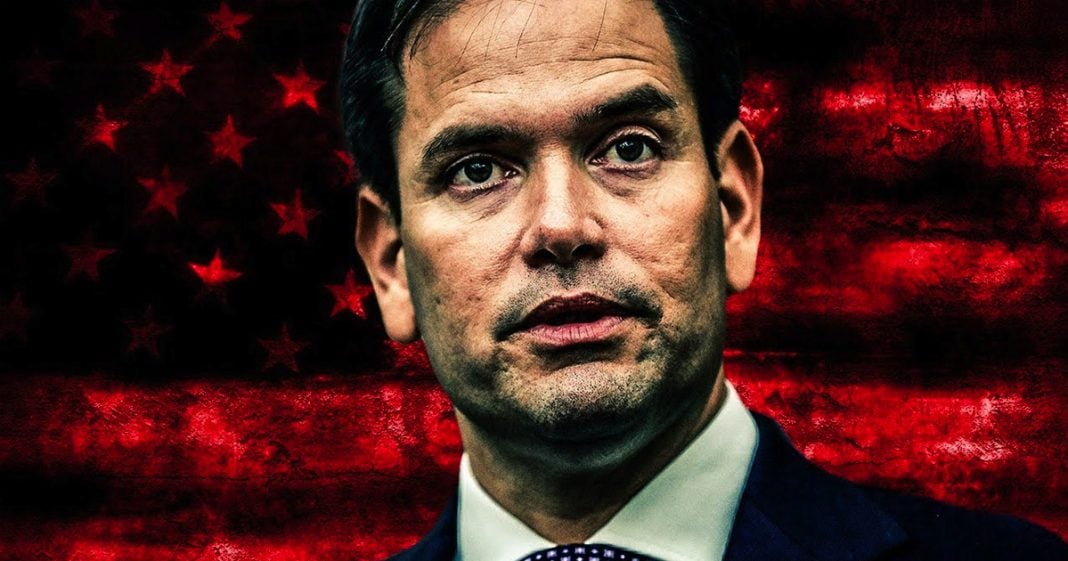 Republican Senator Marco Rubio has proven once again that he has absolutely no backbone, and rather than castigating the President for going against his security advisors’ wishes by congratulating Putin for his fraudulent win, Rubio is attacking the White House “leaker” who told the press about the memo. This man is an absolute embarrassment to the state of Florida, as Ring of Fire’s Farron Cousins explains.

You would think people would be pretty pissed off at Donald Trump for going against the advice of his national security advisors, but no. Some people, like Florida Republican Senator Marco Rubio, are actually mad instead at the people who leaked the memo to the press. Marco Rubio, following this whole news release, tweeted out the following: “I don’t agree with congratulating #Putin, but bigger outrage is this leak that could only come from someone in @POTUS inner circle. If you don’t like President, resign, but this ongoing pattern of duplicity holds potential for serious damage to the nation.”

Actually, Rubio, you’re 100% wrong about all of this, as usual. This poses no threat to this nation whatsoever. In fact, it helps the American people understand what an idiot and imbecile Donald Trump truly is. I would say that’s helping to protect this country. Knowing what a moron we’ve put in the White House may prevent us from doing that again in the future. Second of all, “If you don’t like the POTUS, resign.” Okay. They’re actively trying to. Story after story in just the last few weeks have shown that these staffers inside the White House don’t want to be there. The problem is, the job market for former White House staffers under Donald Trump in Washington DC is non-existent.

A story came out two days ago talking about the fact that, yes, they are technically being discriminated against because nobody wants anyone from the Trump White House working for them. Trust me, if they could resign, they absolutely would, because yeah, they do hate working for this guy, but you’re glossing over the bigger issue here. Donald Trump went against the advice of his national security advisors, endorsed the results of a sham election, and you’re mad at the leakers.

Rubio, to be honest, is actually not alone. John Kelly is absolutely furious that this memo was leaked out to the press and for the entire world to see, and you know what? We deserve to see it, though. We deserve to know what’s going on in this White House. We deserve to know if Donald Trump is truly as arrogant as we think he is, that he refuses the advice of people who know better than him. This, once again, proved that Donald Trump is gonna do whatever the hell he wants to do regardless of what people in the White House tell him he should do. That’s dangerous. This time, it was just congratulating a dictator. Next time, it could be on the decision to launch nuclear weapons. We don’t know, but we do know that Trump is not listening to a single person inside that White House, and Rubio’s anger here is dangerously misplaced.