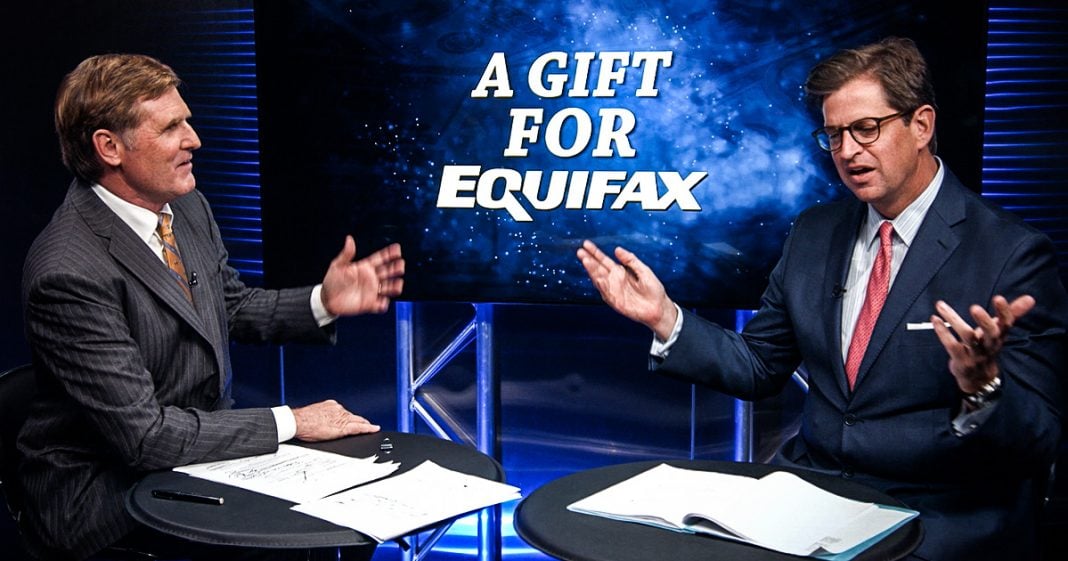 Nearly 150 MILLION Americans were effected by the Equifax data breach, but rather than punishing that company, the Senate now appears ready to actually REWARD them for their dangerously reckless behavior. Ring of Fire’s Mike Papantonio and Peter Mougey discuss this.

Mike Papantonio: Nearly 150 million Americans were effected by the Equifax data breech. But rather than punishing that company, interesting, the Senate now appears ready to actually reward Equifax for their incredibly reckless, dangerous behavior. I had to read this story twice because I thought I must have read something wrong, that this is one of the most hated businesses in America. Matter of fact, it’s amazing. Out of 235,000 complaints that the Consumer Financial Protection Bureau gets, 30,000+-

Mike Papantonio: Everybody hates this company. But the Senate rewards them. Tell us this story.

Mike Papantonio: Everything the guy touches, this guy is just a nightmare. But anyway, go ahead.

Peter Mougey: I mean, Senate Banking Committee chair, you would think he would know. Here’s what he did. He made an amendment at the last minute that was designed to negatively impact Equifax and instead, he rewards them. So he is now sent additional business to companies owned by Equifax saying, “You have to go do business. He doesn’t even check to see. Equifax is hub and spoke. They have the hub, which is the credit collection, and then they have all these different businesses run off of there.

Mike Papantonio: These would be competitors. But you’re saying Equifax now owns them or-

Peter Mougey: [crosstalk 00:01:38] send business to the Equifax owned companies without even checking to see if they owned them.

Mike Papantonio: So Equifax is sitting in the back office making all the money, laughing about it. Well, they did something else too, which is-

Mike Papantonio: No, they’re gonna make a lot of money.

Mike Papantonio: They’re gonna make a lot of money of this deal.

Peter Mougey: Because they own all the competitors.

Mike Papantonio: Well, and you have to know, knowing Crapo’s background, the guy’s a freak, man. To know his background, did he do it on purpose?

Peter Mougey: Well, he is from Idaho.

Mike Papantonio: Yeah, the other thing that Crapo does is he says to Equifax, “We’re going to make you,” makes it sound like it’s a punishment. “We’re gonna make you give free credit monitoring service to the military.” Okay, what does that really mean, Peter Mougey?

Mike Papantonio: What ends up happening, they make money on that deal, don’t they?

Peter Mougey: Oh yeah. I mean, Crapo sent business, what’s called vantage source solutions. Vantages source solutions and he sent business there. But on the military, they have to go pull the data from Equifax. So while they’re pulling the data from Equifax, Equifax charges a per transaction service. So no matter which way you go, Equifax is making money. There’s got to be legislation that imposes statutory liabilities on these data breaches because quite frankly, the court’s aren’t imposing a lot of liability for these data breech.

Mike Papantonio: Yeah, well, okay. What’s interesting is they just now found several million more people that were effected by the Equifax breech. Equifax, if you remember, put this story in perspective. This is a company that kept it quiet. They knew that they had a breech. It was clear they had a breech. But they kept it quiet and while they kept it quiet, the CEOs of the company were selling their stock. The managers were selling their stock and making a killing and their defense was, this is really priceless. Their defense was, “Well, we had to sell and we couldn’t say anything because that would have been insider information and we had to stick-”

Peter Mougey: I’ve got a newsflash. Maybe don’t sell your stock during the point in time and just pretend like you’re doing the right thing.

Mike Papantonio: Yeah and they said it was a scheduled sale. [crosstalk 00:03:53]

Peter Mougey: You know what the scary part about this was, and I didn’t know this. 18% of Americans, adults, have never checked their credit report and about half the people, since the 150 million personal information was divulged haven’t pulled a credit report.

Peter Mougey: Not even since … So you can go to annualcreditreport.com and pull your credit report and review it, look and see if there’s any new pulls and you can actually freeze any credit requests. So to me, I was shocking how few people have checked. That’s half the … 150 million people. What? There’s 330 million people in the US. Half the people … And this isn’t just your name. This is parts of your driver’s license, personal information.

Peter Mougey: And credit can get pulled off that information. Half people haven’t even checked. Pull your credit reports. Take a look at them and buy one of the services that provides the checking to make sure that no more credit’s been pulled. But, of course, those are halfway home by Equifax anyways.

Mike Papantonio: Okay, this next story ties into it. You had CNBC do a pretty good story on this particular issue. They said, “Okay, well 148 million Americans had their identity stolen, had basically everything you needed to steal somebody’s identity was taken from them.” We found out now, it’s another 2.4 million in addition to the 143 or 144 million. So now the question’s coming up. How do we ever really get a handle on identity theft for those people? Isn’t that the real problem here?

Mike Papantonio: And then in addition to that, what are these people probably doing that makes the chance of identity theft even worse?

Peter Mougey: The social media piece is where the CNBC focused on, which was, if you go yo your Facebook page and you list where you went to grade school and what your maiden name was, those are kinda often used for passwords and all of the information you’re relaying on social media will give the hackers or the people that bought your identity, will give the hackers the ability to further extrapolate and dig into your credit card information, your retirement accounts, anything else. So the point of this article or one of the points was to be careful about how much identity, how much information you disclose on social media, which can compliment the data that was stolen from Equifax to create more of a-

Mike Papantonio: Well, the experts on this, I mean, people have really started analyzing the identity theft issue and the experts say that most of it comes from things like you give everything on Facebook. Here, I’m at a part with my Aunt Matilda. Instagram here I am-

Mike Papantonio: Yeah, Aunt Matilda. So all of this information, it’s part of the missing link there and they take the Equifax material, put it together with this and the chances … I mean, these experts are saying the chance of not being able to build, really, a mechanism where broad, broad identity theft takes place and that’s why when you tell me that more than half of US citizens have never even checked to see what’s happened since the Equifax breech. I find it impossible to believe.