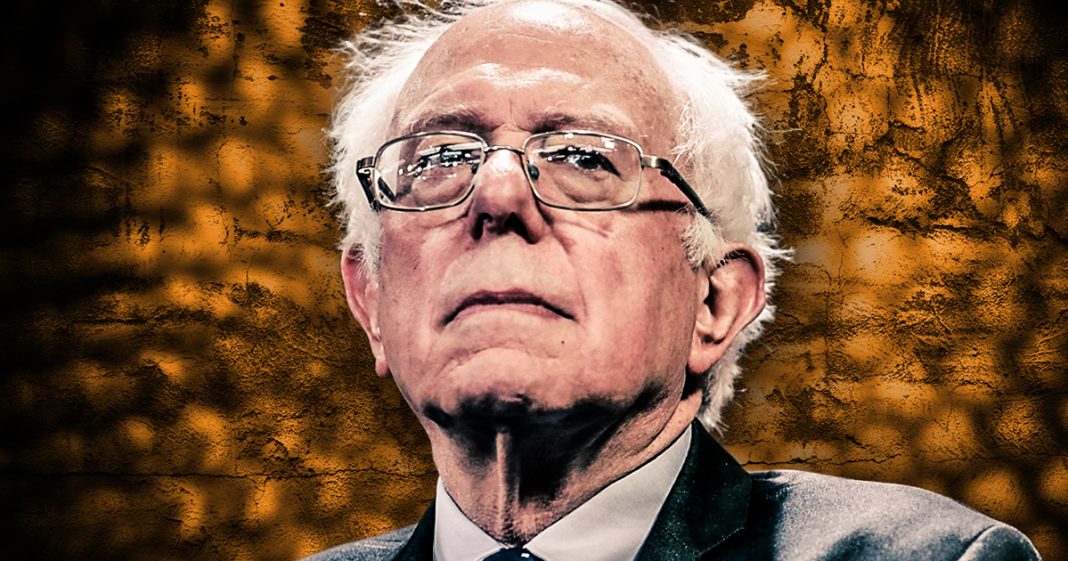 Senator Bernie Sanders hit back against some of his colleagues and the media recently by saying that their nonstop conversations about Stormy Daniels and Russian collusion were distractions from issues that actually effect the lives of the American people, like growing income inequality. Ring of Fire’s Farron Cousins discusses this, and explains why he “mostly” agrees with what Sanders has to say.

On Monday evening at a town hall event where he was joined by Michael Moore, Elizabeth Warren and economist Darrick Hamilton, Senator Bernie Sanders talked about the fact that the Stormy Daniels payoff issue and the Russia talking point being thrown out by the media, by Democrats, by Republicans, that all of these are distractions from issues that actually effect the lives of American citizens. Now, the town hall event was watched by 1.7 million people, and it was specifically focusing on the issue of income inequality here in the United States, which is an issue that is not getting the kind of attention it deserves. Probably because a lot of people are too focused talking about Stormy Daniels or Russia. To an extent, I agree with Bernie Sanders on this. The media needs to start talking about issues that actually effect the day to day lives of American citizens.

But having said that, I don’t think that the Stormy Daniels issue is a big nothing story. We’re looking at the President of the United States potentially being involved in a cover up criminal activity if he knew about he payment to Stormy Daniels. That to me does sound like a big deal about whether or not the president broke the law. Now, should we devote 24/7 coverage to it? Absolutely not. As for the Russia thing, you do have too many people in the corporate media who wanna talk about Russia, Russia, Russia all day long. That’s not helping anything. We have investigations going on in that regard. Specifically the Robert Mueller. So how about we just let him finish and we move on and talk about issues that actually effect people.

I do agree with Bernie Sanders on that, but I do also agree that there’s probably something to both of those stories. But the thing is that the media is doing this because this what the American public is craving. This is how they get ratings. And that’s the problem with the corporate media. That is the inherent, built in, focus on stories that don’t matter, because it gets the eyeballs. It happens in online media as well. And it is disappointing and it’s sad that that’s the way it has to be. But sometimes, you have to move on from those issues.

So again, for the most part I agree with Bernie Sanders, but later on during this town hall, Bernie Sanders said something that was absolutely the truest thing that people probably didn’t even wanna hear. He said that being against Donald Trump is not enough. You have to come up with policies. You have to come up with plans and you have to speak to the American people about the issues. That is what I think the Democratic Party in general still doesn’t seem to understand, even after the 2016 Presidential Election.

You’re not going to beat Trump. You’re not gonna convince people to vote for you by telling them how bad Donald Trump is. Everybody knows that. Hell, even people who support Donald Trump agree that he’s a pretty crappy human being. But it’s not gonna change their minds. What’s gonna change their minds is policy. Telling them why your party offers something better then the other party. How are you gonna pay for it and what are gonna be the end results? That is what the American public actually wants to hear about. Yeah, they like to tune in to corporate media and watch the latest issue of, you know, porn star versus the President. But at the end of the day, they also want politicians talking to them about how they’re going to make their lives better.

So whether or not the President gets indicted for any of this, whether he gets impeached or whether members of his cabinet get indicted, all of that is to an extent a distraction, as Bernie Sanders said. And if we’re only focusing on that. If the democrats only want to talk about how horrible he is, then they can once again prepare themselves for massive electoral losses in this year’s midterms. But if they go out there an they talk to people about issues, about their problems, and how they’re going to fix them, then I think that blue wave that everybody’s been talking about could materialize and Democrats could take back the House and hopefully even the Senate. But you gotta talk about issues and policies in order to do that.