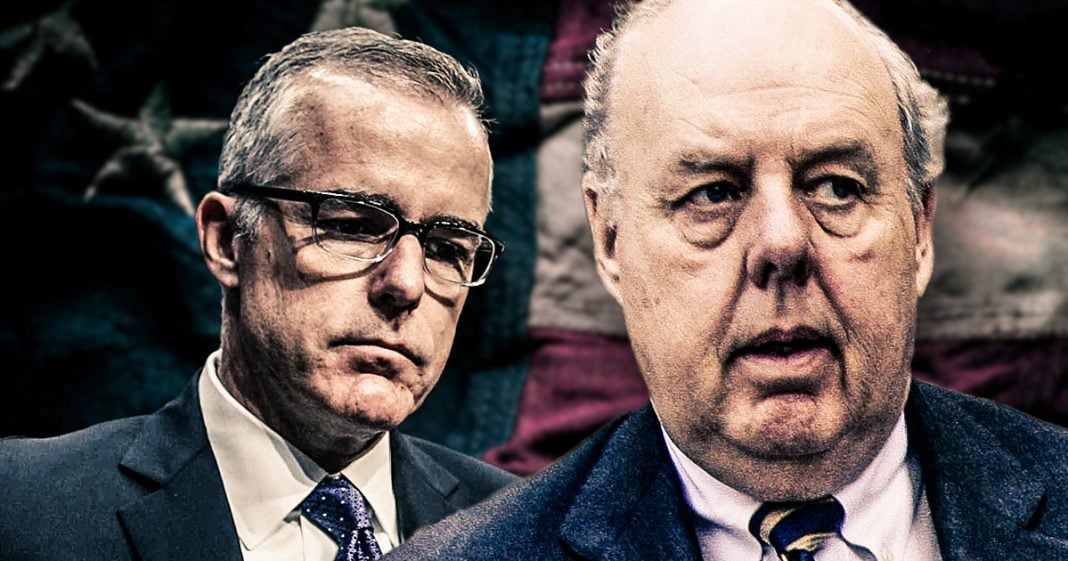 Following Donald Trump’s firing of Andrew McCabe, the deputy director of the FBI, his lawyer John Dowd made a statement saying that now that McCabe is gone, this should bring an end to the Mueller investigation. Dowd has to be one of the worst lawyers in this country to make such a blatant admission of obstruction of justice, and the White House is furious with him over the comment. Ring of Fire’s Farron Cousins discusses this.

Last Friday late in the evening Donald Trump decided to fire Andrew McCabe, the Deputy Director of the FBI, so that the man could not receive his government pension after spending his entire adult life working for the federal government. Trump fired him so that he couldn’t get that pension and also because he wanted to send a message about the special prosecutor’s investigation. But that’s the story everybody knows and here’s another one everybody knows. On Saturday, it was reported that Donald Trump’s attorney John Dowd said that now that McCabe is gone, we can hopefully bring an end to the Robert Mueller investigation into Donald Trump.

Well, what John Dowd, Donald Trump’s lead attorney, doesn’t seem to understand is that if he’s saying that McCabe was fired so that the investigation could end, which is pretty much what he said, that’s obstruction of justice. The intent of the firing would have been to stop the investigation, which is obstruction of justice. That’s the definition. It’s all about intent as any lawyer will tell you and Donald Trump’s lawyer basically just said that that was the intended purpose of firing McCabe.

Now, the White House was obviously furious about this because that’s a pretty stupid thing to come out and admit. Then Dowd had to come out and say, “Whoa, whoa, whoa. I wasn’t speaking on behalf of my client. I was speaking for myself.” Then a few hours after that, he came out and said, “You know what? I just retract my whole statement. I take it all back. I didn’t mean any of it.” In the span of about 12 hours there, we have this moron lawyer making three different statements trying to correct the damage that he inflicted upon his own client there which leads me to believe that John Dowd is without a doubt the dumbest lawyer in the United States of America.

Now, I have actually spend a lot of time working with the Trial Lawyer Hall of Fame at the Temple Law School in Philadelphia, and I have interviewed a lot of the inductees into the Trial Lawyer Hall of Fame. After speaking with these attorneys and writing articles about them, I can tell you that they all believe in basically the same few ideals: hard work, honesty and integrity. Knowing that, meeting some of the best lawyers that this country has ever seen, I can tell you that John Dowd will never make it into that hall of fame among the other trial lawyers, prosecutors and defense attorneys that have already made it in. John Dowd is nowhere near ever going into that hall of fame unless he goes there as a visitor. But I say that because I know a lot of attorneys. I know the best and the brightest in this country because my job has allowed me to interview these people and get to know them.

John Dowd is a moron and I think, to be perfectly honest with you, Donald Trump himself has a case of malpractice against John Down should he want to go that route. Every time Dowd opens his mouth, Donald Trump gets in more trouble. That’s not the kind of guy you want leading your legal team when you have to go face Robert Mueller in the very near future. John Dowd is doing more damage to Donald Trump than Robert Mueller at this point, and Donald Trump doesn’t even have enough good sense in him to fire Dowd and maybe pick a somewhat competent attorney to lead this team and maybe keep him out of prison. If he keeps Dowd as the head lawyer or, hell, even on the legal team, Donald Trump is probably going to end up in jail, which is exactly what he deserves.