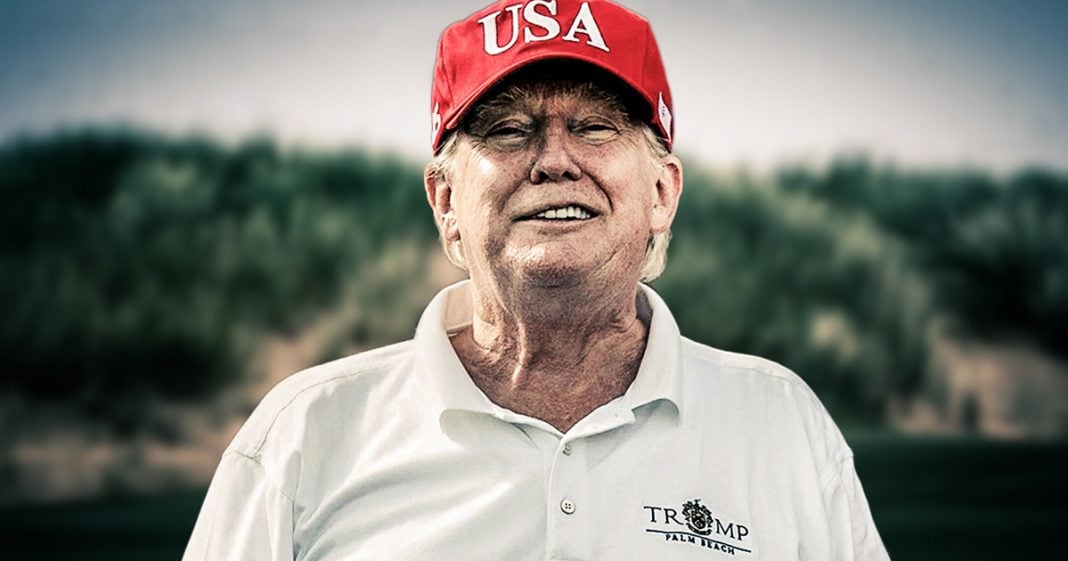 Donald Trump went even more off the rails than usual with his Sunday morning Tweets this weekend, making up falsehoods about the Mueller investigation. Sensing trouble, his aides decided to abruptly “whisk him away” to one of his golf courses in order to calm him down. Ring of Fire’s Farron Cousins explains why Trump’s temper tantrums are going to get him in serious trouble with the special prosecutor.

On Sunday morning, Donald Trump decided to launch into another one of his Twitter tirades, this time questioning why special prosecutor Robert Mueller’s team was made up exclusively of democrats. Donald Trump spent most of the weekend attacking the special prosecutor, attacking the investigation. Even on Monday morning, he’s tweeting out that this is a witch hunt that is never going to result in any kind of prosecution or indictments for him or any of his closest allies.

Those Sunday morning tweets where he falsely accused Mueller of assembling a team of democrats, forgetting the fact that the three people in charge of it, Mueller, Wray, and Rosenstein are all republicans appointed by republicans. His aides decided that they had had enough. They knew that he was causing damage to himself with these tweets, so they decided to whisk him away to the golf course.

Now, Maggie Haberman from the New York Times tweeted out that, “Aides have decided to whisk Donald Trump to a golf course today.” This was after his little tweet storm early in the morning.

Then, one of the reporters in the press pool confirmed it, saying “Whisked is right. Members of the pool were told to rush, i.e., run, to the vans in the motorcade at the White House. We’re at the golf club now waiting for developments.”

His aides were actually smart enough to see the damage that he was causing to his own case against the special prosecutor, so they decided, ‘You know what? Time’s up. Grab your golf clubs, let’s get the hell out of here because you’re going to make this so much worse for yourself.’ You know what? Kudos to those aides. I mean that’s a lot of intuition and really good idea to take action on that, because they understand what he’s doing here.

The bottom line is this: Mueller is likely going to be fired by Donald Trump. According to reports that have surfaced Monday morning, Donald Trump is increasingly going to put the pressure on Mueller himself to end this investigation in response to the fact that Mueller has issued subpoenas to the Trump organization for some of their financial records.

Donald Trump is pissed off. He wants to personally spend his time attacking Robert Mueller on Twitter, or possibly during interviews. Whenever he has the opportunity to do. Things are only going to get so much worse.

That’s also going to create a world of problems for Donald Trump. The more he goes out there, like when he bragged about firing Andrew McCabe, a lot of people already consider that to be obstruction of justice. You’re not making your case any better with these personal attacks on Robert Mueller. If you’re truly innocent, which I don’t think you are, how about you try acting like an innocent person for once instead of going after every single person that’s trying to investigate you? That’s not what an innocent person does. It smacks of guilt. Most people in this country have enough awareness to understand exactly what you’re doing and exactly what you’re trying to cover up.