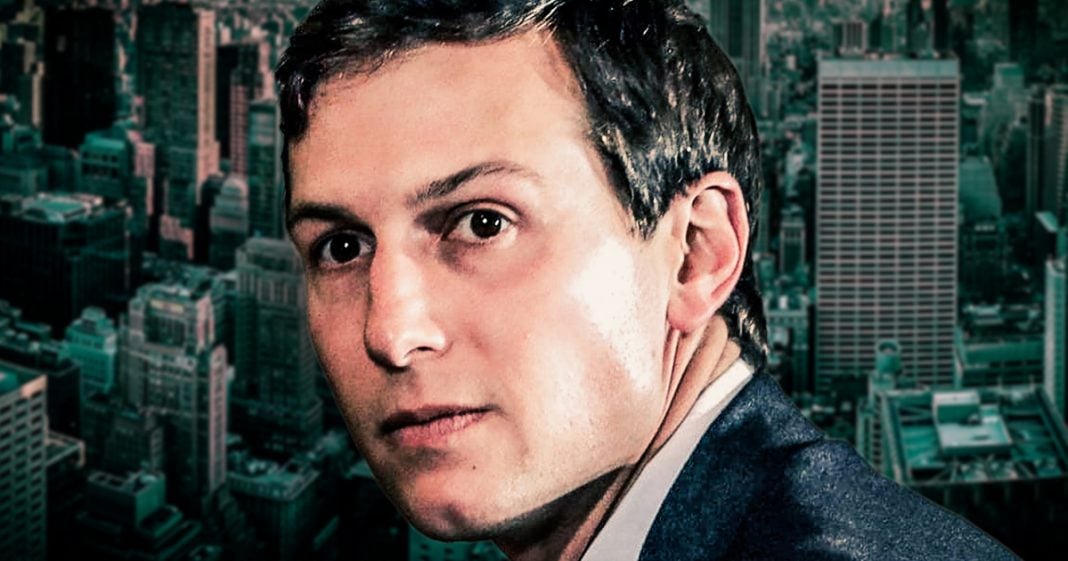 Jared Kushner’s company has been busted filing false paperwork in order to secure investors for real estate projects in the state of New York. The scheme, which is highly illegal, involved Kushner and his compatriots lying about rent-controlled tenants to investors to artificially inflate the price of real estate and then selling it for nearly twice what they paid based on the false data. Jared Kushner will likely end up in prison before all of this is over, as Ring of Fire’s Farron Cousins explains.

As I’ve said many times in the past, and I’m gonna say it again because I believe it. Now more than ever, Jared Kushner is probably going to prison. This weekend, it was revealed that Jared Kushner, while he was the head, while he was running Kushner Companies in New York, falsified filing data with the state to try to show that apartment buildings that he had purchased did not have any rent regulated tenants living there, which allowed him to artificially inflate the prices of those real estate ventures and sell them for more than twice what he paid for them. That is illegal. Falsifying data to the state on your real estate dealings is illegal. Jared Kushner broke the law.

And what’s interesting about this is that it once again comes down to the fact that this moron, who somehow’s still working in the White House, can’t fill out a form properly. If you think about every Jared Kushner story out there, with the exception of the meeting with the Qatari officials, it all boils down to Jared Kushner not filling out some kind of form correctly. But in this case, it wasn’t because he’s an idiot. It’s because he’s corrupt as hell. He wanted to be able to turn a profit from his real estate ventures in New York, so he told regulators that he didn’t have any rent controlled people living in the building, which he did. If an investor or a buyer knew about that, and they knew that they couldn’t jack up the rent prices for those people, they would be less likely, and in most cases not likely at all, to put any money into those properties. So, Jared Kushner lied about it so that he could make a profit, screwed over the tenants, who now see their rents go through the roof, and he made a handsome fortune off of that. Again, that is 100% illegal.

Now, Kushner Companies claims that they went back and after they’ve seen this now, so they amended the forms and fixed it. But yeah, that’s not how it works. If you go in and rob a bank, but then you come back later and say, “All right. Here’s all your money back.” You’re not off the hook. You still made a profit off lying. You lied to state regulators. You still go to jail, Jared. And I don’t think that this moron understands it. And I don’t think the American public understands what a corrupt little piece of crap Jared Kushner truly is because that’s what we’re dealing with at this point.

This is a guy who, at every possible turn, everything we have seen from him, is a law breaker and a general shady character. He is still serving inside of the White House, as both the son-in-law and I guess some kind of advisor to the president of the United States. He is out there meeting with foreign officials, as is his wife. And at the same time, he knows damn well that he lied to regulators, that he broke the law, that he ruined the lives of the tenants of those buildings that he owned, all so that he could make a profit. If there is any justice left in this country, Jared Kushner will be on trial, and hopefully in prison before the end of this year.