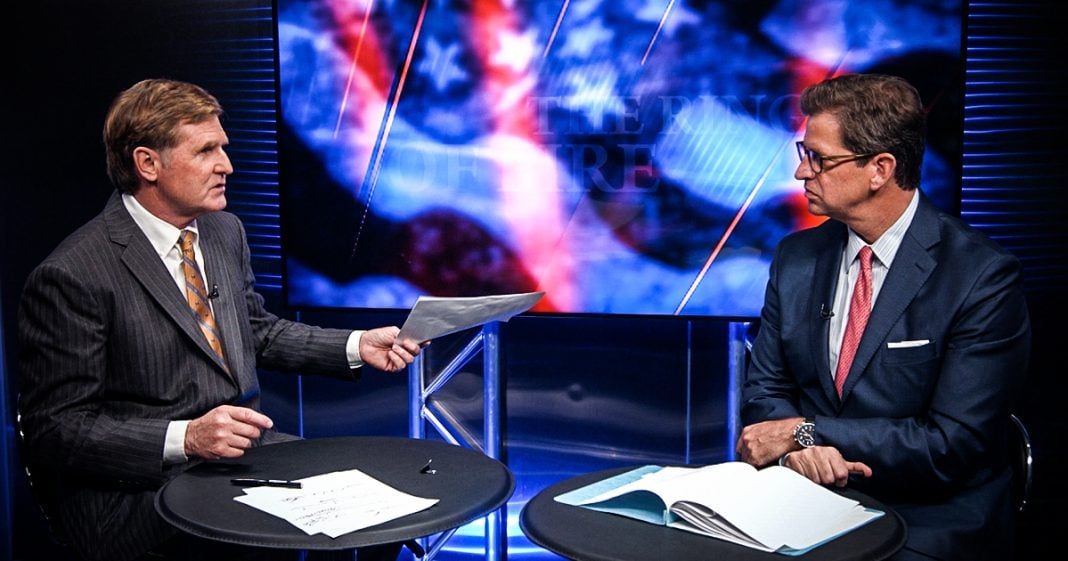 Alex Jones and his organization Info Wars have been hit with a defamation lawsuit for spreading fake news about one of the witnesses to the murder of a woman during the Charlottesville rally last year. Ring of Fire’s Mike Papantonio and Peter Mougey discuss this.

Mike Papantonio: … Alex Jones in the news again. His organization, Info Wars, have been hit with a defamation lawsuit for spreading fake news about one of the witnesses to the murder of a woman during the Charlottesville rally last year.

Now, to lay this case out a little bit, you had a reporter … Well, he wasn’t a reporter. You had somebody that was filming all of this, and this individual, after the film was released, Alex Jones makes up this fantasy story. The guy’s name was Gilmore.

He makes up this fantasy story about Brendan Gilmore, who did the filming, saw the woman being dragged down the road. It was a horrendous kind of video. But he makes up this story that Gilmore, since he was a service officer with the state department, but he says that Gilmore was actually working for the CIA, and this was all planted by the CIA. This was an event that the CIA wanted to take place. They set it all up, and according to Alex Jones, Brendan Gilmore was the person in charge of doing that. That’s why he filmed it, which of course, is nuts talk. It’s nut talk.

So, the question then comes out, and in the end, Gilmore’s family gets death threats. They hack his system. He gets physically accosted. They send white powder to his parent’s home, because Alex Jones-

Peter Mougey: All because he videoed horrific incidents.

Mike Papantonio: First of all, you know what my call is? My call is, unfortunately, I think Gilmore loses this case. What’s your take?

Peter Mougey: I think it’s a risk. It’s funny you say that, because we’ve got to make a political system and a judiciary system that backs up these people and protects them. They’ve got to have claims that are viable in court. No one else is going to protect them against these politically motivated attacks.

In order to stop this kind of conduct, they’ve got to be able to bring lawsuits, and hit them in the pocketbook. I mean, go ahead and go after their bottom line and their bank account, because that’s what’s going to stop this kind of conduct with these politically motivated hacks, these pattern of attacks. So, if police force isn’t going to stop it, we’ve got to do it in the judiciary, but –

Peter Mougey: I hear you. Can he make it stick? I don’t know, but-

Peter Mougey: But should he win is the question.

Mike Papantonio: Well, should he win, from a moral standpoint? The answer’s yes. From a first amendment standpoint, hopefully, hopefully, no. I mean –

Mike Papantonio: Yeah, you can call him a deep state shill, and a CIA asset, and the question is, is if I’m defending Alex Jones, which I hope I never have to do, but if I’m defending Alex Jones, what I’m saying is, I’m tying up this issue of him being a service officer for the state department. That’s the first thing. I’m trying to raise his role as a public figure.

Now, that alone doesn’t do it, but when you take the film, and you put it on the internet, and it goes all over the place, you’re doing that knowing that you in some ways, are becoming very much a public figure. The name Brendan Gilmore becomes part of that.

Peter Mougey: And that’s one of the defenses.

Mike Papantonio: That’s one of the defenses.

Peter Mougey: I mean, if you can prove truth or a public figure, the standard goes way up.

Mike Papantonio: The standard goes way up, and unless you have actually … Well, the best argument for Gilmore, is to say that Alex Jones accused him a criminal act, because if you raise the standard, and you accuse somebody of a criminal act, even if they’re a public figure, that raises the review and you don’t necessarily win, but it’s slander, per se. You know, it’s liable per se, which means, we start off with a presumption that you’ve accused that person of a criminal offense, and because you’ve accused them of a criminal offense, we maybe can get around the public figure issue.

Mike Papantonio: The burden shifts a little bit. It’s not entirely, but you know, there’s ways to win this case, but I think has got … He’s got a road that he’s got to overcome, a lot of case law. Fortunately, the one thing we do protect in the country, even no matter who’s president, that they can’t seem to take away from us, is the first amendment.

Anytime I see a case like this that threatens, I don’t care who it is, if you’re threatening the right to be able to say these things, then I think you’re making in-roads into doing harm to the first amendment.