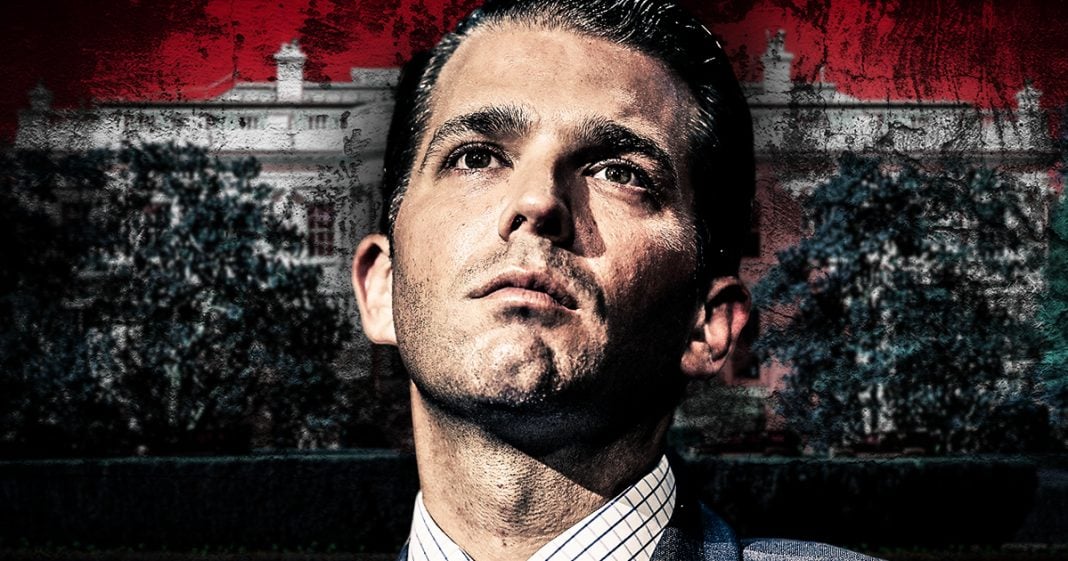 According to a report by Page Six, Donald Trump, Jr.’s wife is preparing to divorce the President’s son, with part of the reason being due to her father-in-law’s new job. Additionally, friends of Don Jr. say that they are worried about him and that he’s Tweets could be cries for help or a sign that he’s not well. Ring of Fire’s Farron Cousins discusses this.

According to a recent report in Page Six, Donald Trump Junior’s wife is preparing to leave him. Page Six interviewed close friends to Donald Trump Junior and his wife and they said that divorce is well on the way and that Donald Trump’s wife does not like being in the spotlight that her husband has basically thrust her into by his father becoming president of the United States and due to the fact that Trump Junior just can’t stay out of the business of being involved with his father and his political campaigns. So his wife, according the Page Six and all their friends, is planning to leave him and file for divorce. Now that’s only part of the story though. I mean, look. I feel bad. They have five kids. So I feel bad for the kids. But people do get divorced all the time. Hell, half of marriages end in divorce. So it’s not like this wasn’t … It’s not unprecedented. I feel bad for them. But they will be okay eventually because Donald Trump Junior, probably not the greatest role model to have as a father as many people can imagine.

But the biggest part of this story was not just the divorce that could be pending, but it’s the fact that close friends to Trump Junior say that they’re very worried about him because of his increasingly combative and basically incoherent tweets that he keeps sending out. They’re worried about his mental wellbeing because the guy sitting there tweeting those things out is not the person that they’ve come to know and become friends with over the years. In other words, becoming the son of the president of the United States has somehow changed Donald Trump Junior into a more despicable and disgusting person according to his friends, what they’re telling Page Six. Now that to me is not surprising whatsoever. Trump Junior, just like his father, is the kind of guy who gets corrupted the more power that he has and though Trump Junior may not be president of the United States, having Daddy sitting in the White House certainly does make you a little bit more powerful.

He now has this presence where he can go around and do campaigns for other people and do speeches and, hell, he’s running the Trump businesses, the company with his idiot brother. So yeah. He does have some power, and clearly, it’s gone to his head. But I think we need to take away from this one thing. Trump Junior, according to those who know him best isn’t doing so well in the mental health department. Neither is his father. But maybe it’s time that somebody look at Trump Junior and figure out what in the hell is going on. Maybe he needs to sit down with a psychiatrist or a therapist or something and work out the little demons that he’s got kicking around in his head because if this kid gets any more power under him, he could become absolutely a tyrant working for his father.