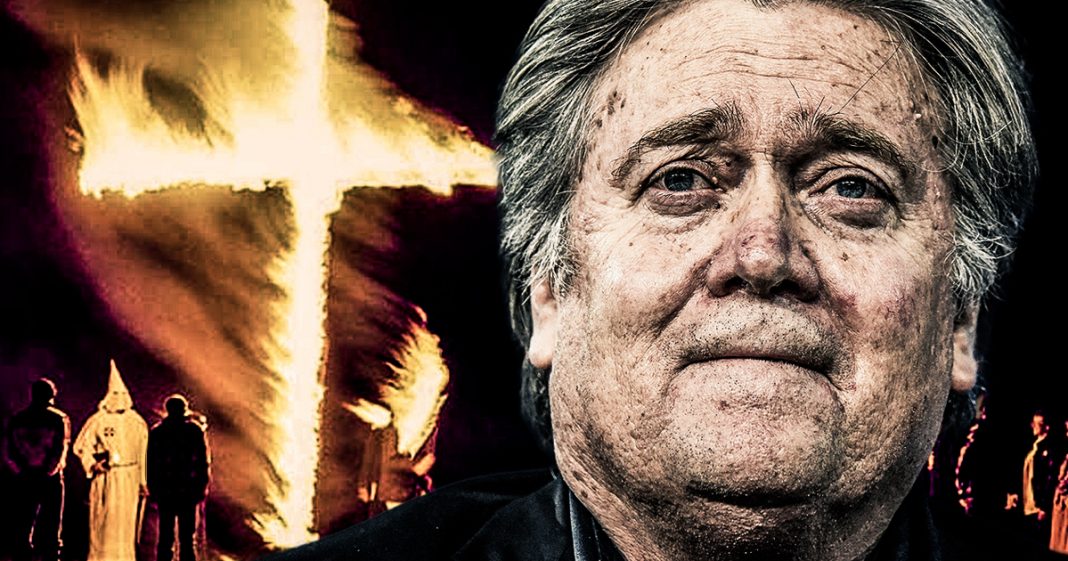 During a recent speech in France to the National Front Party, former Trump adviser Steve Bannon told the crowd that they should wear the tag of “racist” that critics throw at them as a badge of honor. Not surprising coming from someone like Bannon, but it does show us that he has absolutely no problem with his own racist beliefs. Ring of Fire’s Farron Cousins discusses this.

Recently, Steve Bannon, the former advisor to Donald Trump, and at least on two separate occasions, the guy that ran Breitbart, recently gave a speech in France to the far right National Front Party, where he told the crowd that if the critics call you a racist, you need to wear that label like a badge of honor.

Now, for those of you who aren’t familiar with France’s National Front Party, it is a party that dislikes, I guess, immigrants. I believe the word hates immigrants would probably be a little bit more accurate there. Not a big fan of Muslims. It is, for all intents and purposes, a racist organization, and they have helped sway elections in France in recent years. And so, they invited a guy like Steve Bannon over, and Bannon tells them that yes, be proud to be a racist, because Bannon is, obviously.

When you look at what Steve Bannon has accomplished in his life as an advisor to Donald Trump, running Breitbart, all of it is based upon racism. Breitbart peddles racism and hatred, not just against African-Americans, but against Jewish individuals, against immigrants, against Muslims. That is racism, and Bannon brought that same thing with him to the Donald Trump White House. Now, he is out there telling these people that they should wear that term like a badge of honor?

This man is absolutely disgusting and despicable, and if he’s still in France right now, I hope that they don’t let him back into the United States, because somebody who holds those kinds of views and is proud of it, that’s the kind of person that needs to be on a watch list rather than somebody who should have the ear of the President of the United States. That’s the real threat in the United States that we need to be tackling. It’s not the people coming across the border. It’s not the people arriving here on airplanes. It’s the people like Steve Bannon, born and raised here, who live among us, who hold these disgusting, racist beliefs, and believe that they’re a symbol of pride, rather than the symbol of shame that our society should be viewing them as.

Steve Bannon makes no qualms about being a racist here in the United States, and neither do his followers, and that is the problem. There’s no way to really change these people’s minds. I believe that a lot of them, including Steve Bannon, are too far gone, but we need some kind of campaign, an education campaign, something to convince younger Americans that this is not only not acceptable, but it’s something that’s going to make your life miserable, should you choose to embrace the kind of racism and hatred that people like Steve Bannon and organizations like Breitbart have been peddling for over a decade.