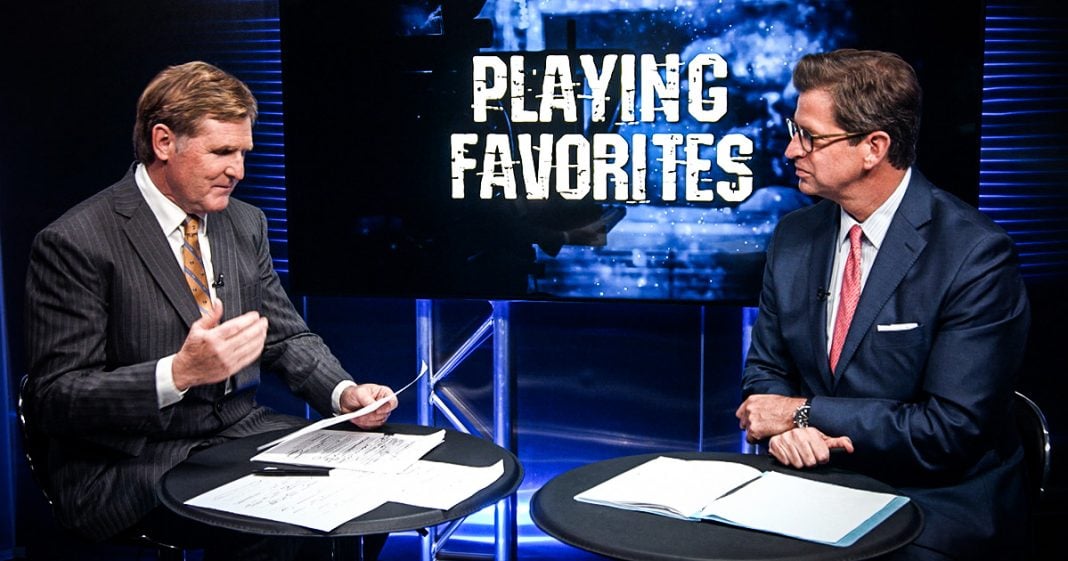 The FCC is facing a lawsuit from advocacy groups alleging that the agency is not only NOT considering the damage that their rules are causing to consumers, but also because the agency is showing a clear bias in favor of major corporations and corporate-controlled media outlets. Ring of Fire’s Mike Papantonio and Peter Mougey discuss this.

Mike Papantonio: The FCC is facing a lawsuit from advocacy groups alleging that the agency is not only not considering the damage that the roles are causing to consumers, but they’re also … The agency is showing a clear bias, massive bias in favor of major corporation and corporate controlled media outlets. Now this is now surprise. Let me put this in perspective.

In 1980 there were more than 50 independent organizations. They controlled the news, they controlled magazines, books, movies. You what there are today? Four, arguably three. Okay? Now, if you want to know the history of it, this is what progressives hate to hear, but Bill Clinton made all that happen. Bill Clinton signed the telecommunications act and it put us in a situation where we’re down to four entities that own everything. And Bill thought he was going to get a free ride here. “This was going to be good for me. They’re going to herald me as the great president. The media’s going to be good to me. They’re going to treat me like a …”. Well he found out just the opposite, obviously after Lewinsky, but here we are again now, and we’ve got the FCC controlled by [Pie Man 00:01:20]. I like to call him Pie Man. He’s the one that basically tried to assault the internet to where there’s no freedom on the internet to where you have to have money to be able to pay for internet.

Peter Mougey: I’ll tell you what. The concept state run media comes to mind. At the end of the day, with three or four conglomerates running the content of the news, and keep in mind what’s happened, all those independents you mentioned. Sinclair cuts, slashes. It’s like getting that news service. They get rid of the local media, you consolidate everything, you create economies of scale, and all of the media content gets run by a couple of companies. So Pie’s doing nothing besides pitching state run Trump administration at the end of the day, and you’re going to end up getting state run media with just a couple that’s run by a couple.

Mike Papantonio: Yeah well exactly. What we do have, we have Sinclair run media, and that’s the point. Look, the way that this is being brought up is they’re saying that what’s happening is that you’re taking away the local flavor of the media. The people in poor areas of the country rely on the news, the nightly news, they need to know what’s going on in their-

Mike Papantonio: Well this is the end. You see, here’s what this story doesn’t talk about. It doesn’t talk about this is the end result of what has been happening since Bill Clinton signed the telecommunications act and now people of color … Is this the … Part of the claim is that people of color have been pathetically handled in all this. They’re not going to have access to media, and truthfully if you watch Sinclair, it’s merely an extension of the Trump agenda. It’s totally an extension of the Republican agenda. So there are really no surprises here.

Peter Mougey: But everybody that wants to go towards deregulation, and pro-business, let’s take all the regulation, make business more efficient, the problem is is that that regulation’s there to protect the minority. Protect the smaller groups of people. By taking it all out you’re going to end up with these huge mega companies running the whole thing.

Mike Papantonio: Well understand, this is the same FCC that wants to take away internet freedom to where you have to have a lot of money to be able to have your material shared on the internet. Pie. Mr. Pie as a like to call him.