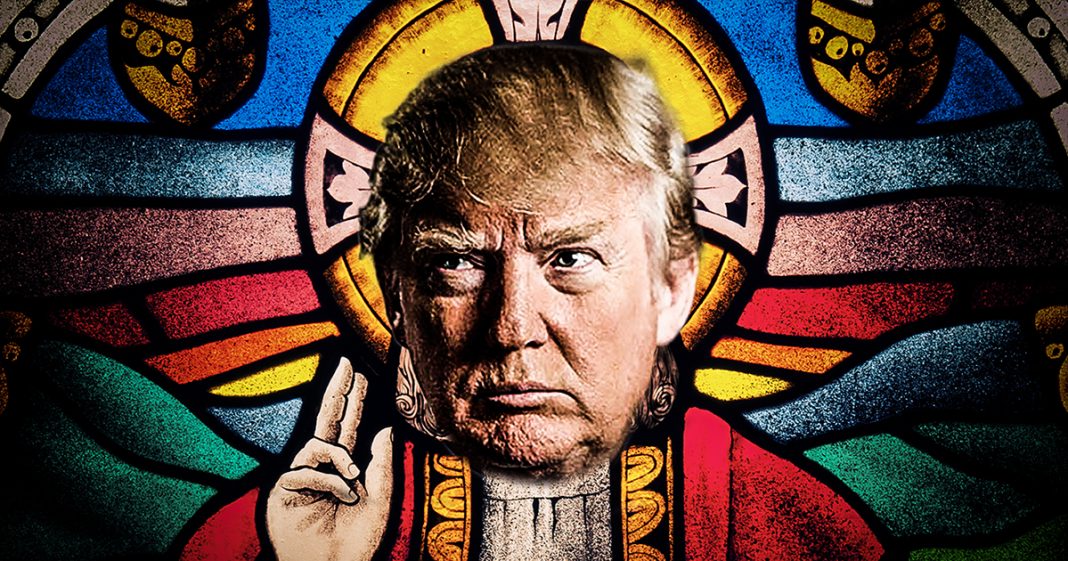 Evangelical leaders are usually quick to jump on the issues of affairs carried out by politicians, but apparently that is only the case when dealing with Democrats. Some of the most influential evangelical leaders in the country have made it clear that Trump’s alleged affair with Stormy Daniels is completely OK with them, and apparently at least half of Trump’s voters feel the same way. The issue is not the affair, the issue is the hypocrisy of those on the Right, as Ring of Fire’s Farron Cousins explains.

Apparently evangelical leaders in the United States only care about extramarital affairs among politicians if that politician happens to be a Democrat. Now I’m sure most of us remember back when Bill Clinton went through his whole thing with Monica Lewinsky, all of the religious right and that moral majority out there attacked him constantly for being such an immoral disgusting human being.

Now that it’s been revealed that Donald Trump allegedly I guess I have to say had an affair with porn star Stormy Daniels, all of these same evangelical leaders that thought Bill Clinton was a piece of crap suddenly think that it’s perfectly fine for a guy like Donald Trump to have this affair even though his wife had just given birth to their son four months prior to the affair beginning. People like Tony Perkins, Robert Jeffress, Franklin Graham and Jerry Falwell Jr. have all excused Donald Trump’s behavior, and in some cases, admitted that they’re going to give him a mulligan for this particular affair.

The religious right has been exposed once again as being complete and total hypocrites who don’t mean a word that they say. You can’t say that one affair is bad, but the other is good just because you side with somebody politically. That’s not how it works. That’s not how morals go. Morals don’t change from one party to another. Morals are morals, and clearly none of these evangelical leaders have any to speak of. Another interesting fact is that half of Donald Trump’s voters say that they don’t care about the Stormy Daniels affair if he had it. They don’t care.

It’s not going to affect their vote. They’re still going to support him, but again had it been a Democrat, oh my god, they would be calling for us to string them up from the trees. That again shows the hypocrisy among the Republican Party. Here’s the thing, the affair itself doesn’t matter. It doesn’t matter who Donald Trump is sleeping with. That’s a matter for him to deal with with his probably pissed off wife. What is important is whether or not Donald Trump broke the law if he approved that $130,000 hush money payment to Stormy Daniels. That’s the important issue. The affair at this point is irrelevant. That hush money is what has become the central issue here.

If Trump knew about it, if he approved it and if he wired anybody any money, that guy is looking at serious jail time. Hopefully Stormy Daniels gets to come out soon and tell her story and let us know exactly who she spoke with about this hush money payment. Again even breaking the law at this point isn’t going to make these evangelicals or the Trump supporters change their opinion of him. Donald Trump was 100% right when he told us during the campaign that he could walk out in the middle of 5th Avenue and kill somebody and he wouldn’t lose any supporters.

Because of all the things that this man has been exposed as being, he hasn’t lost anyone. In fact, with some of these evangelical leaders, they like him more today than they did before any of this even came out.