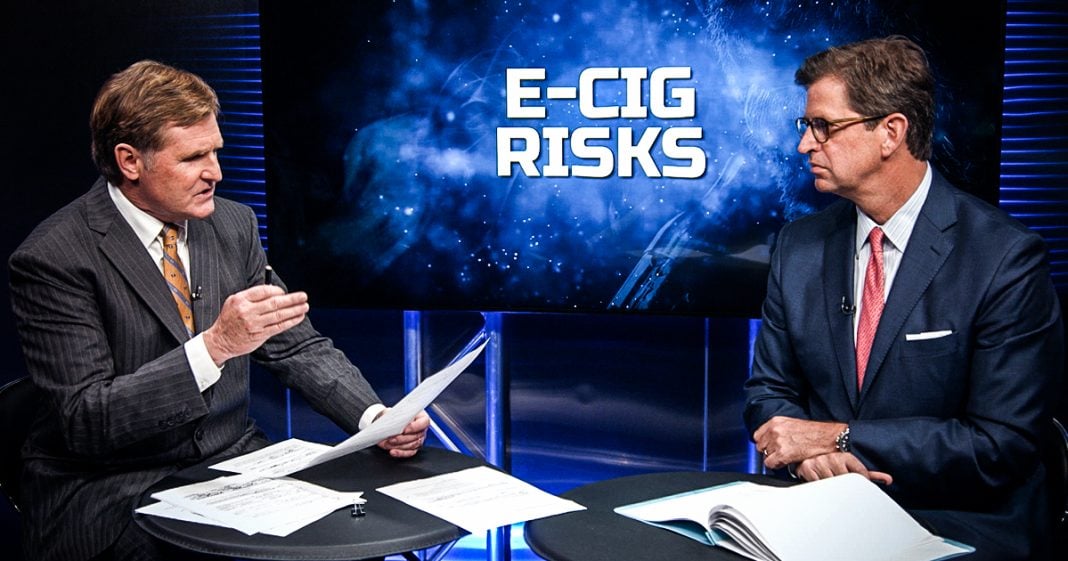 A new report released this week says that some e-cigarettes deliver cancer-causing chemicals into the human body — and popular fruity flavors appear to be the worst. Ring of Fire’s Mike Papantonio and Peter Mougey discuss this.

Mike Papantonio: A new report released this weeks says that some e-cigarette, the systems deliver cancer causing chemicals into the human body and popular fruity flavors appear to be the worst. Now let me make a prediction. People watching this that are vapers, I mean, they use a vape, they’re gonna be crazy about … They’re gonna be so angry that we did this story. Every time we try to talk about the e-cigarette, oh my God, they go nuts. I mean, it’s like a bunch of freaks when you talk about e-cigarettes. But now, this is about the fifth important report that’s come out that says this is a problem.

Mike Papantonio: Yeah, I mean, I hear, “Oh, well if we don’t vape, we’re gonna die because we’re addicted.” Look, let me just tell you something. This is a real story in the sense that they’ve looked at this for a long time now.

Mike Papantonio: You know why I love to do this story? Because I love to see the people’s comments. I mean, honestly, if they’re vaping, they go friggin’ crazy like we’re talking about the end of the world. We’re talking about science here and this is not my science. They studied this and here’s what they’re finding. Now. Let me just give you a few ideas of what’s in this vaping process. It’s not just water, as they like to seel. Acrolein. Well, acrolein is related to oral cancer, dermal cancer, lung cancer. There’s no question about that. We’re not making that up. That’s what the study says. So you vapers that are gonna get so upset that we did this story, go look up acrolein. Also, look up propylene oxide. This is a great one. Propylene oxide is absolutely carcinogen. It was the same thing that we had in … It goes all the way back to the tobacco days. We handled the tobacco case in the United States. We actually initiated the tobacco case in the United States. So we kind of know this stuff.

The other thing is that these chemicals that they’ve studied, they’ve been able to duplicate the process. They’ve been able to say if a person vapes with this item or this item over a period of time, they can tell you exactly how much was absorbed in the average human body. So there’s no guesswork here. These are dangerous chemicals.

Peter Mougey: And the kids are now more likely to smoke after they’re addicted to the nicotine. They start with the fruity flavors and then they’re building into tobacco. We’ve been using these enough. There’s no good in this, absolutely no good and I’ll tell you. The kids, the reports, the numbers are jumping. They’re popping with the number of kids that are using the raspberry flavors and-

Mike Papantonio: You know what the interesting thing is? The tobacco companies, the people that we sued, what was it? 15, 20 years ago and finally got them to be a little bit responsible and the smoking has decreased because of it. They’re the ones buying these companies up and they know these same chemicals that we’re talking about because we’ve been through it with [crosstalk 00:03:33]. Yeah. So the point is this. There is something I saw about this story that is wrong. Diacetyl causes popcorn lung. At least some of the manufacturers are taking that out of the process. But they’re still using these other chemicals, some of them to get that cool flavor of fruity and mint flavor that kids can smoke. So you know what? If you’re upset that we did this story, send me an email. I really don’t care. This is the truth. You can vape until you die. It doesn’t make any difference to me. But it should make a difference to the people, the children, who are actually the target of this marketing and they’re the ones that the industry’s going after in a big, big way.

It’s the same thing we saw in the tobacco industry when we first brought those cases. You’d have the lifelong smokers that thought, “My God, we were the evil empire for trying to do something to the tobacco industry.” So my attitude is exactly the same here. Vape until you die. It’s your choice. This is a free country. But where it comes to the corporation targeting children and that’s what this report is really about.