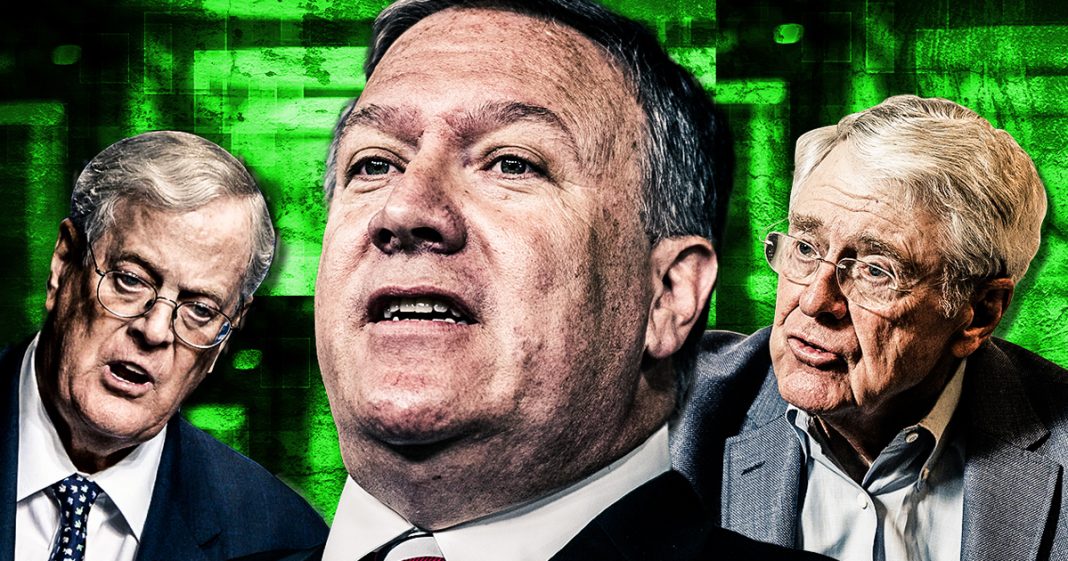 Mike Pompeo, the man that Donald Trump has selected as his pick to be the next Secretary of State, is the number 1 all-time recipient of Koch Brothers money for his political campaigns. On top of that, his life in the private sector was also funded by the Koch Brothers who invested heavily in the businesses that Pompeo founded. The Kochs are about to have their very own puppet as the Secretary of State, and Ring of Fire’s Farron Cousins explains what that could mean for this country.

With Rex Tillerson out as Secretary of State and Donald Trump nominating former CIA Director Mike Pompeo to take his place, let’s take a look for a minute at who Mike Pompeo actually is.

According to an article on Think Progress this week, Mike Pompeo happens to be the number one all time recipient of Koch brothers campaign money. In just four election cycles that Pompeo was involved in running in the House of Representatives, Pompeo received more than $900,000 from the Koch brothers from their companies, their employees and their front groups like Americans for Prosperity. $900,000 on one congressman in one small district over the course of four elections. So Pompeo number one Koch guy of all time could now be running the State Department as Think Progress points out. What Think Progress failed to mention in their article however is that that’s not the extent of the ties to the Koch brother that Mike Pompeo has.

Mike Pompeo during his career in the private sector started two separate businesses one after the other and in order to keep those businesses afloat to get the capital needed to run them, do you know where that money came from? It came from the Koch brothers who came in with both of his businesses made lofty investments to make those businesses successful. So Pompeo before he even ran for Congress was already in the pockets of the Koch brothers and completely dependent upon their money to sustain his lifestyle.

So it’s no surprise that he received all that money from them when he decided to run for Congress and I wish Think Progress would have gone back a little further and covered that aspect of his life because to me that’s an even bigger part of the story. Pompeo has been in the pockets of the Koch brothers for decades now. He has been dependent upon them in his private life, in his professional life and you can’t tell me that he is not going to reward them when he becomes the new Secretary of State.

What’s even worse is that you’ve got a Democratic leader Chuck Schumer who announced that he is not going to tell his Democratic members to just block Pompeo and CIA director replacement Gina Haspel. He’s not going to tell them to just outright block them. Instead he just, he wants to hear from the other Democrats. Let’s see what they have to say before we make any rash decisions. No, that’s the problem with the Democrats today. You don’t need to sit and wait it out and see what your members have to say. We know who Pompeo is. We know who Haspel is. She is the woman who was in charge of CIA black site torture in Thailand during the war on terror under George W. Bush. There is no reason to even consider having either of these people in charge of the CIA or the State Department.

So Chuck Schumer needs to get his ducks in a row here and say, “I don’t care what you have to say about it, these are horrible human beings with horrible connections who’ve done horrible things including war crimes in their past. We’re voting them down no matter what.” Mike Pompeo will use the State Department to repay the Koch brothers because they have funded his entire life. Don’t think that for a second that he won’t. He is going to use it to approve pipelines. He is going to use it to go out there on behalf of the Koch brothers and work out deals with other countries for them. He is going to put more money in their pockets because they’ve spent decades putting more money in his pockets.