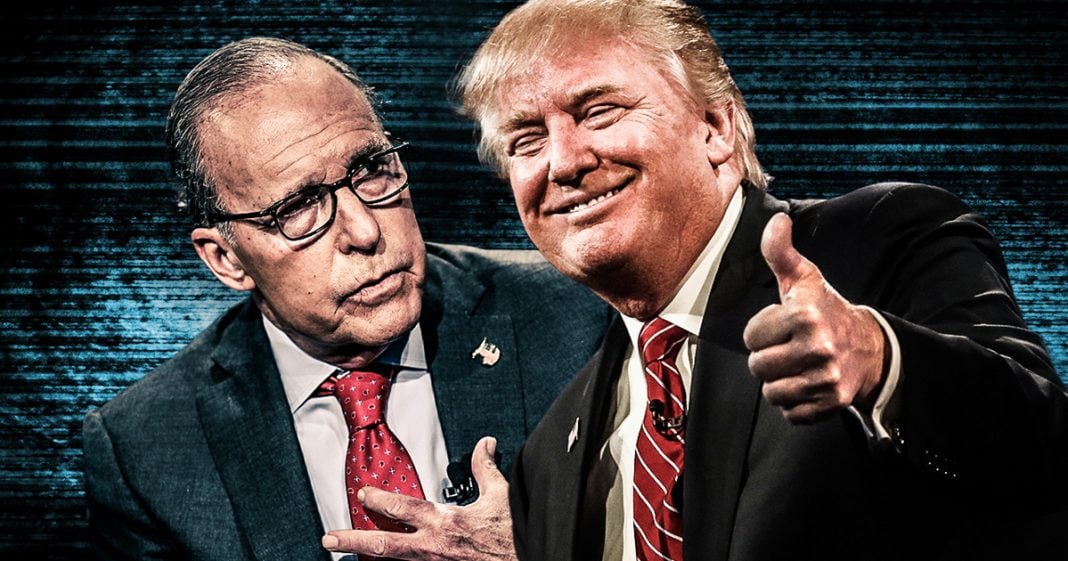 According to a new report, the President is unhappy with many members of his staff – including John Kelly and HR McMaster – and he wants to find suitable replacements. But the report says that a large part of being selected for the Trump administration is “looking the part,” so Trump is actually just watching TV to see who has the best “look” to fit in with his administration. Ring of Fire’s Farron Cousins discusses this.

According to a new report by Axios.com, Donald Trump is in the mood for a major staff shakeup at the White House. And I’m not talking about the low level staffers, the people that really want to get out. I’m talking about very important people; John Kelly, H.R. McMaster, people on that level including those two actually. And staffers who’ve spoken to Axios say that Donald Trump is not necessarily interviewing new people for the jobs.

Instead, he’s watching TV. Why? Because according to these staffers, Donald Trump believes that if you’re going to work for his administration, you have to look the part. You have to talk the talk and you have to have a good on-air presence because that’s what’s really important to the President of the United States.

Case in point, Donald Trump’s newest economic advisor, Larry Kudlow from CNBC. Rather than going with somebody who actually understands how economic policies work, he’s going with a TV talking head who spends his days talking about how Republican policies are good for money and Democratic policies are bad for money, even though there’s no basis for that in rational economic thought, but Kudlow looks good on TV as Donald Trump personally told him, so he gets the job.

So these staffers say that Donald Trump is looking for a replacement for people like H.R. McMaster and Chief of Staff John Kelly is just watching TV. That’s how he wants to find the next person. So maybe based on that we could see Chief of Staff Tucker Carlson and National Security Advisor Sean Hannity. That’s what we could end up with because we have a President that is so painfully stupid and irresponsible that he thinks he can find his next cabinet member by turning on FOX news or CNBC and seeing who looks the best on-air, who’s the most loyal to Donald Trump and who is willing to tell the most outrageous lies to benefit Donald Trump because that’s what’s important to this guy.

I don’t have to explain to you why that’s a danger to the United States, but I’m going to go ahead and do it anyway. Larry Kudlow, if you’ve ever spent five seconds watching his TV show on CNBC, which I unfortunately have, doesn’t know enough about economic policy to be an economic advisor to the President. What he does know, however, is that tax cuts for corporations are good. And that it doesn’t matter if we kill labor unions and people don’t have a living wage because corporations are in charge and that’s the only thing that matters is making them more money.

That’s not a viable economic policy. And it hasn’t been any time we’ve tried to enact policy based around that, but that didn’t stop Kudlow from getting the job, did it? And that’s exactly the kind of people Donald Trump is looking for. It doesn’t matter if you’re intelligent, it just matters if you’ve been a Trump and Republican loyalist long enough to serve on his administration. Oh, and you have to look good on TV.