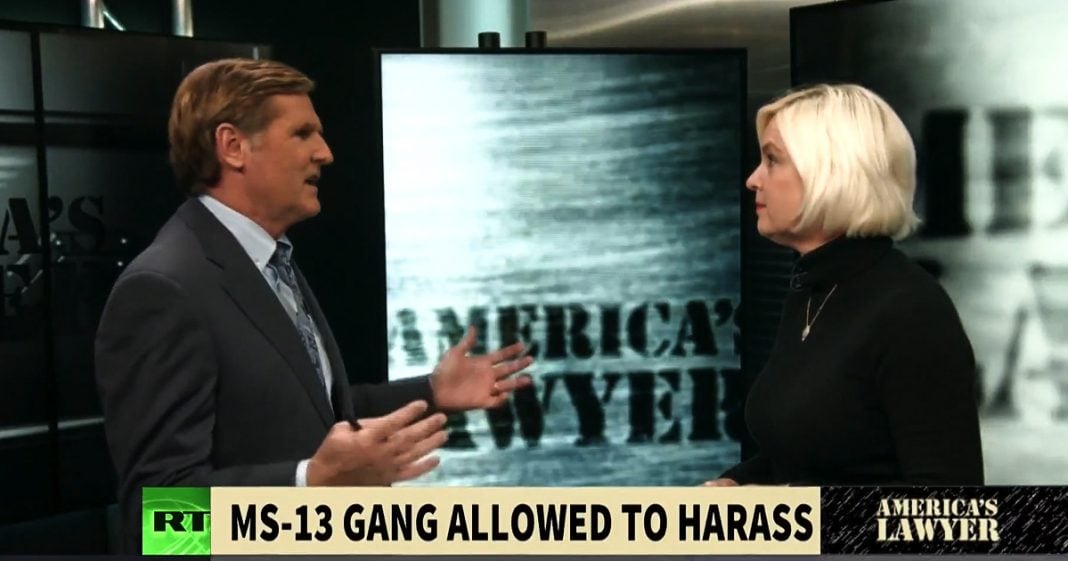 Via America’s Lawyer: Mike Papantonio is joined by Mollye Barrows to talk about how the alarming murders of students perpetrated by members of the MS-13 gang.

Mike Papantonio: A New York mother is suing a school district for failing to protect her daughter from being brutally murdered by the MS 13 gang. Gang members were harassing this girl for almost two years before they killed her. The school district is well aware of this problem the whole time and they apparently did nothing to defend this young girl’s life.

Joining me to talk about this is Mollye Barrows, Legal Journalist for Trial Lawyer magazine. This is not just an isolated story. We’re hearing this more and more. It all centers around MS 13, especially that part of the story.

Mike Papantonio: Tell me, aside from the obvious, and that is the folks at the school failed to do their job, how has MS 13 become such an impact at so many of these schools?

Mollye Barrows: It’s really interesting. Apparently it stems back 2013, the office of refugee settlement, so it’s apparently a resettlement is what they call it. They’re having thousands of these unaccompanied minors come through the Mexican border, predominantly from Central America. It is through that government office they’re being placed. A lot of these kids are turning themselves into authorities so the government office places them some 5,000 of these unaccompanied minors were relocated in Suffolk County where Brentwood High School is where this young woman was killed and her best friend was also killed as well.

Kayla Cuevas is the 16 year old that was beaten to death in September of 2016. It’s her mother who is filing this lawsuit. It’s a federal lawsuit for $110 million basically saying, as you said, this bullying had been going on, she’d been repeatedly threatened and nobody had done anything to protect her until one day she and her best friend were walking home from school, they disappeared, their bodies were found beaten. They’d been attacked with a machete.

There had been five murders of students at Brentwood High School and they even picked up some kids that were on their way to go kill another student. The kids that were picked up were from the MS 13 gang. Essentially they said, “Yes, we were going to go kill this kid basically because they ticked us off.” Two of the kids that were in that group attended the school as well so basically you have gang members within the school and they have this Central American background and sometimes they’re targeting other students because they come from a different Hispanic background or they just are simply running wild and looking for any excuse to commit violence is what police are saying.

It does go back to some immigration concerns that the Trump administration has brought up.

Mike Papantonio: If you think about it, ICE is getting sessions and ICE is under all this criticism for going after the MS 13 gang. I don’t quite get that criticism, but I do understand what’s happening here is you have MS 13, these unaccompanied minors, they don’t have parents, they don’t have any family coming into the country. What ends up happening is MS 13 says, “We’re your family.”

Mollye Barrows: That’s right. They bring these kids in and of course they pray on their insecurities as so often happens in these gang violent situations. What is so tragic about this is that the school really is left dealing with this huge influx of students. They’ve had to hire more teachers, deal with all this violence that’s occurring within school grounds. The mother said she and her daughter had gone to the school district as well and said, “Listen, my daughter’s experiencing these threats, all these terrible things are happening to her.” They said, “We’re going to …” especially from one particular student, they said, “We’re going to get rid of that student.” The child had even pulled a knife on her but they never did take that student out of the school.