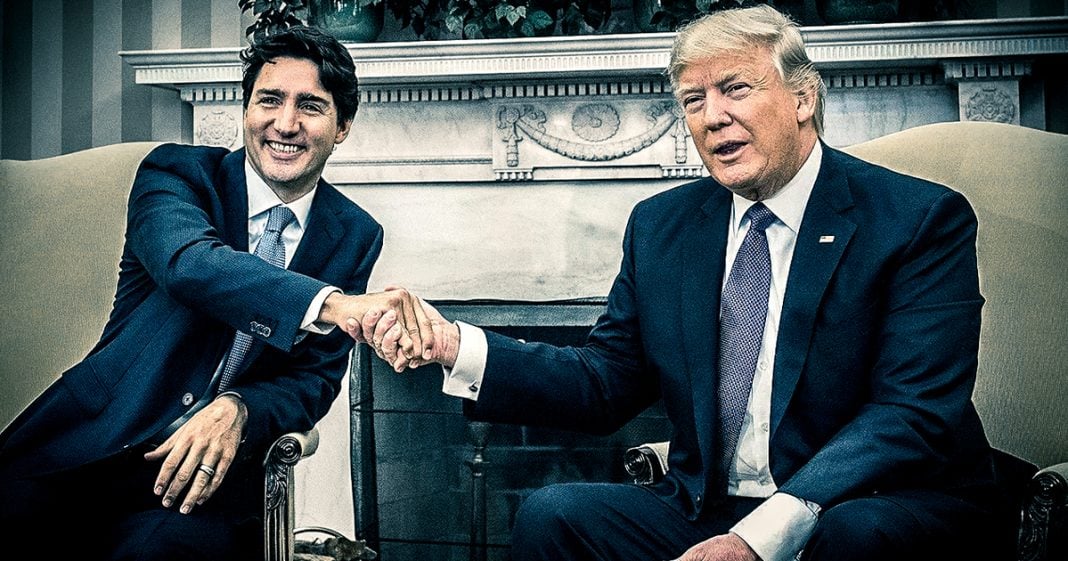 During a fundraiser this week, Donald Trump boasted to his would-be donors about the fact that he likes to make up facts, and that he specifically did it recently during a meeting with Canadian Prime Minister Justin Trudeau. His arrogance is going to cost this country valuable allies, and it is past time for his supporters to wake up and realize the damage that this man is causing to this country. Ring of Fire’s Farron Cousins discusses this.

At a fundraising dinner on Wednesday evening Donald Trump bragged to his would be donors about he just likes to make up facts especially when he’s meeting with other leaders from around the world. Specifically Trump referred to a meeting he had had recently with Canadian Prime Minister Justin Trudeau where Trudeau came into his office, according to Trump and said, “Hey we don’t have a trade deficit. There’s no trade deficit between our two countries.” And Trump said, “Nope, you’re wrong Justin. I like you but you’re wrong.” Trump admitted to the donors in that crowd on Wednesday evening that he just made that up. He didn’t know if that we true or not but he said it anyway because that’s just the kind of guy that he is. Trump then said they sent their staffers out of the room to find out if there was a trade deficit and lo and behold, Justin Trudeau was the one telling the truth.

Donald Trump admitted and Washington Post obtained audio of this little fundraising dinner that he had, admitted that he lies to foreign leaders. One of our closest both in terms of relationship and spatial relationships allies and he just lies to him because that’s the kind of piece of crap human being that Donald Trump actually is. And all the Donald Trump supporters out there, let me explain this to you and I’m going to use small words so that you can understand it properly. We have to maintain close, honest relationships with our allies. Why? Well let me take you back to the early 2000s when George W. Bush and his administration manipulated intelligence to launch an Iraq war. He lost American allies. People didn’t want to sign onto his war on terror because they knew that it wasn’t true. We didn’t get their help.

That’s the kind of situation we’re looking at now and I’m not saying we’re going to war but whenever something happens, if we want to make better trade deals, if we do find ourselves in an armed conflict that we need help with, we’re not going to have those people there because we have a president who likes to brag about the fact that he lies and makes shit up to these other world leaders and if you don’t think that that’s a problem then I feel sorry for you. Because you need to understand the kind of damage that this moron is inflicting upon this planet. This is not the way a normal president behaves. There is such a thing as bluffing. You know trying to get a better deal here and there and then there’s outright lying and that is exactly what Donald Trump is doing because that is exactly what Donald Trump admitted to doing.