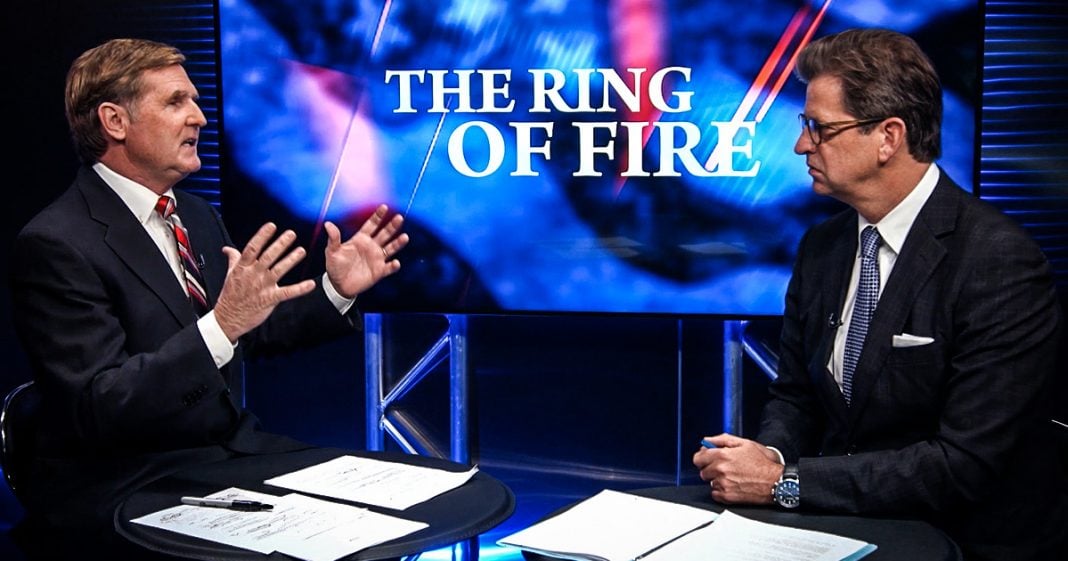 Last week, Pharma Bro Martin Shkreli was sentenced to 7 years in prison for securities fraud. We’ll talk about that sentence in a minute, but before we do, let’s focus on the fact that he is going to prison for scamming RICH PEOPLE, and not for scamming millions of people by raising the price of an AIDS drug from $13 dollars to $750 dollars. So ripping off average consumers is ok – but ripping off rich people will get you thrown in jail. Ring of Fire’s Mike Papantonio and Peter Mougey discuss this.

Mike Papantonio: Peter, one reason he was sentenced is because the guy has such a horrendous personality. Think about this. When you look at the transcript, you follow this story, the defense lawyer had to stand up in front of the judge during sentencing and say “Yes, Judge. This guy is a horrendous character. Most of the time, I want to punch him in the face. Every now and then, I want to hug him but I want to punch him in the face because he, A, has some type of social dysfunction, B, he believes he’s an intellectual giant. He tries to send out the message that he’s an intellectual giant and understand bioscience really well, better than anybody else, he’s the smartest guy in the room. C, yes, he’s done some terrible things like telling his 70,000 followers that if you bring me a clip of Hillary Clinton’s hair, I’m going to give you $5,000-”

Peter Mougey: That’s what landed him in jail to start off with.

Mike Papantonio: We’ll talk about that. This is complicated for a lot of reasons. But really, the way this lands, the way this really lands, is that he was sentenced because he stole from rich people, not because he-

Peter Mougey: I mean, here’s the message of this sentence. The message sends, if you’re going to price gouge, you can price gouge on schizophrenics, you can price gouge on AIDS patients. Here, he ran the price of the drug from $13.50 to $750. That didn’t land him in jail, that didn’t land him in trouble. What landed him in trouble was that he took money from one company and put it into another at the expense of his shareholders. That’s what landed him in jail coupled with his personality defect that he was laughing at the court, laughing at the judge, making a mockery of the system. I think he just irritated everyone to no end, including his own lawyer, and that’s what landed him in jail.

Mike Papantonio: Well, what about his story … This is crazy. The defense lawyer’s standing … Oh, man, “His upbringing has caused this.” Well, no, not really. This guy was brought up in upper-middle class America. There’s no poverty, there’s no awful situation surrounding his life. But the point is I’ve been a prosecutor, and I’ve had to watch defense lawyers fall on their sword somewhat but nothing like when you say “This guy is such a pompous ass that I’ve really wanted to punch him in the face because he has no social skills. He’s completely dysfunctional where it comes to his ability to interact with people.”

Mike Papantonio: Yeah. Well, what he was doing … If you followed this story, obviously, he’s got some really serious gremlins. When he’s talking about his mansion that he owns and he’s doing exposes on his mansion, his cars, his Maserati that he drive … There’s something fundamental missing here. I think the defense lawyer, going into this, just simply understood “I can’t make this guy into something he’s not. He’s barely human.” But there’s another part of the story I think is really important. You mentioned Zyprexa.

Mike Papantonio: Now, that’s a case we handled. Eli Lilly, that made Zyprexa, was fined 1. … I think it was $1.4 billion, because they were involved in kickback schemes where they were paying doctors to prescribe Zyprexa for other things than it had been approved for. FDA approved it for schizophrenia, very narrow kind of use, schizophrenia. Well, Lilly took it on themselves to go out and sell the American public as “Gee whiz, you can use this for anything.” They were using it for depression, they were using it for a whole host of mental illnesses that there was no indication that it was made for that. But Lilly, about six or seven people at the top of the food chain at Lilly, had to plead guilty to a criminal offense of doing this kickback scheme. But you know what? Not one of them-

Mike Papantonio: … went to jail because, there again, all they did … and people died from using Zyprexa. They died because it was used wrong. Eli Lilly understood that, they understood that it was just … this kickback scheme was a criminal offense. They pled to a criminal offense but nobody went to prison. But on the other end, Shkreli steals from the rich people, he has this scam-

Mike Papantonio: … and he goes to jail.

Peter Mougey: Yeah. Can you imagine, you go into the doctor’s office, you go into your stockbroker’s office, you go into anybody that’s in a position of trust that knows more than you do, and you’re getting advice about what kind of drug impacts your health, impacts whether you’re going to make it, in the AIDS drug, and the doctor or your financial advisor is getting paid to recommend that product. I don’t care if it’s a mutual fund, if it’s a money manager, if it’s a specific drug, why is it so difficult for the regulators to figure out that should be illegal-

Peter Mougey: … and if you’re going to pay people to recommend advice, to recommend prescriptions, to recommend things that impact your health, that can’t be … We’ve got to send some people up the river.