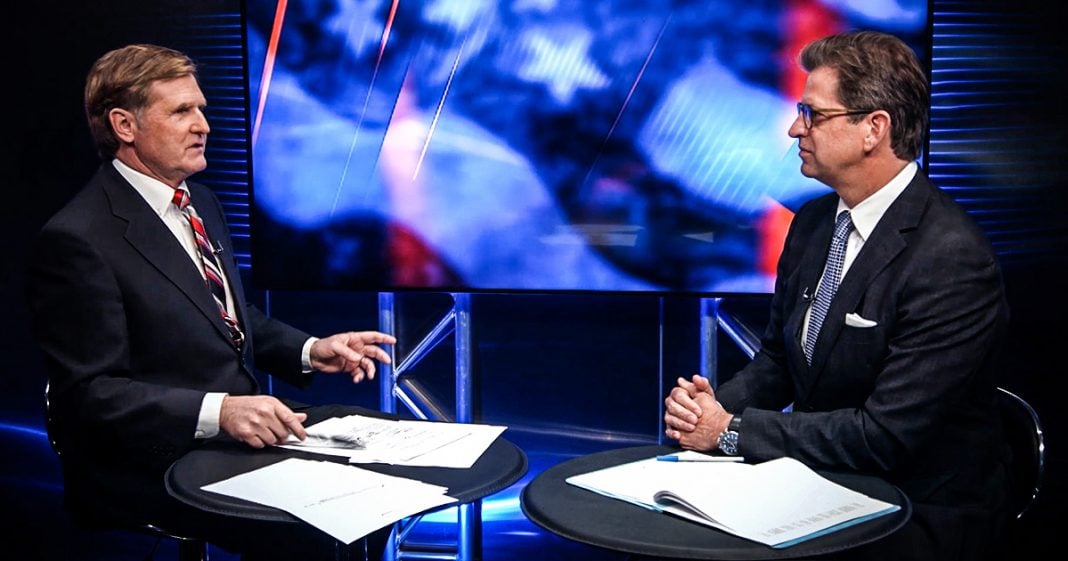 A father in the state of Texas nearly had his daughter taken away from him because he treated his daughter with medical marijuana. The daughter, who was 4-years-old at the time of the treatment suffered from autism and would hit herself so hard during fits of rage that she would break her own bones and even caused brain damage. Ring of Fire’s Mike Papantonio and Peter Mougey discuss this.

Mike Papantonio: A father in the state of Texas nearly had his daughter taken away from him, because he treated his daughter with medical marijuana. The daughter was four years old at the time of the treatment. Suffered autism. Would hit herself so hard during her fits that she’d break her own bones and even cause brain damage. They were trying to take the child away from the father for giving them medical marijuana. Judge says, “uh-uh (negative).” He looked at all the facts. He saw video where this was the child before the marijuana. This was the child afterwards. What’s your take on this case?

Peter Mougey: The way this case was brought is absolutely disgusting. The parents took a video of the kid that, as you mentioned, was hitting herself. The neighbor came over and said, “Try a pot brownie and see if that tones her down.” The parents took some videos, were trying to advocate for medical marijuana, showed the video publicly, and then Child Protective Services came in and starts pushing a case. Now, the judge ultimately brought everything out to even keel. The parents are okay. They can be guardians. The fact that Child Protective Services brought a case, because the parents were trying to do something to advocate that they-

Mike Papantonio: To see the possibility that there may be some benefit. The judge looked at all the facts and said, “You know what? I’m not going to take the child away. As a matter of fact, I’m going to make the parent a guardian.

Peter Mougey: They were charged with child abuse.

Mike Papantonio: Welcome back. I’m Mike Papantonio here with Peter Mougey. The story to me is incredible. I think it’s an important story for a lot of reasons. Here, you had a parent that had an autistic child. The autism was so bad that what would end up happening was the child would break their own arm, break their own leg, cause brain-

Mike Papantonio: Self mutilation. The father said, “Look, we gave the child medical mari- gave them marijuana, and that calmed the child down.” Now, you pick up from there. What happened?

Peter Mougey: There is a charge filed with Child Protective Services for child abuse. When I read the story, I’m thinking, “I’ve got kids.” You’d do anything as a parent to protect your kid. The kid’s beating themselves, breaking their bones, and they were given the child antipsychotic. They just turned the kid into a zombie. That scared the parent. One of the neighbors recommends, “Hey, you know what? Try this pot brownie,” and it worked. They videoed the results, miraculous results, videoed it, and were championing medicinal use of marijuana in Texas. The Child Welfare Services picks up the story and ends up charging them with child abuse, because they’re advocating, “Look at this wonderful result this had on my kid.”

Mike Papantonio: That’s outrageous. That’s a recap. Let me pick up there. Florida, for example, Charlotte’s Web, we are involved … Again, full disclosure, our law firm’s involved with the Charlotte’s Web issue, and that is where there is a low THC marijuana that treats epilepsy that you would have children who are having 50 seizures a day, all of a sudden they’re taking-

Mike Papantonio: They’re taking Charlotte’s Web and they have zero seizures. Well, even the conservative, ultra conservative, legislature here in Florida says, “Yeah, this is a good idea, and we’re going to allow Charlotte’s Web to be sold.” The next thing that happens is medical marijuana in the state of Florida passes. Well, what has actually happened here is you’ve had a huge push back from the pharmaceutical industry. You have the pill, the drug, companies saying, “We don’t want people using marijuana, because it’s going to cause some awful horrendous results.”

Well, awful and horrendous results, we’ve seen at this law firm for 35 years, where you have products that are killing people brain damage, products that are killing people from kidney failure, liver failure, heart failure, DVTs, name it, we’ve seen the full expanse of it. Compare that to medical marijuana that’s been used all over the country and people are getting great results from this. Charlotte’s Web probably is going to save the lives of thousands of kids, people all over this country.

Peter Mougey: The quality of life, and all it’s doing is cutting into the bottom line of big pharma. You’re getting pushback and the stigma of marijuana, although it’s got great results, especially these strains like Charlotte’s Web. What in the world could be wrong with helping out these folks, other than cutting into bottom lines of big pharma that you’re getting this pushback.

Mike Papantonio: Yeah, okay, so now this thing with Sessions. Sessions is out there trying to … He want to make this into a criminal offense. This isn’t just happening. This is happening because the pharmaceutical industry has got Sessions’s ear and they’re trying to push back on medical marijuana. Look, if you have a business, let … Right now, the state of the business is, is if you’re in the medical marijuana business, and you actually are selling to people who are benefiting, it might be cancer, it could be chronic pain that cannot be reversed. Here you see a situation of autism. Now, we start learning more about medical marijuana. Maybe somebody’ll do some research on autism. Before, you couldn’t even get … Medical marijuana wasn’t even available for people to be able to research it.

Peter Mougey: You know what’s fascinating, is states that have legalized marijuana, like Colorado, the opiate abuse is lower than it is in other states. People are using marijuana instead of using big pharma and opiates. It’s [crosstalk 00:05:34].

Mike Papantonio: Big pharma is pissed. Big pharma is trying to use the prosecution card. They’re scaring the heck out of the banking industry. These people are selling medical marijuana, they’re having to do everything in cash. Sometimes, you’ll see them able to use a very special credit card. If you’ve got a distributor of medical marijuana, the feds make it so difficult for that person to do banking business. The banks, of course, they’re caving in on any kind of threat at all. They’re saying, “Well, I’m sorry. We can’t be involved, because we’re a continuation of a conspiracy.” That’s actually happening here, isn’t it?

Peter Mougey: Absolutely it is. That’s what’s happening all over the country. We’ve got a good alternative to big pharma. It’s working. People are using it. The ramifications aren’t horrific. It’s working great. Why not use it?

Mike Papantonio: Well, why not use it because the pharmaceutical industry is pushing back. You know what they’re doing? They’re creating front groups. They’re fraudulent.

Mike Papantonio: You know, Mothers Against Medical Marijuana, well no, it’s Pfizer, and Merck, and Lilly, against marijuana, because it’s cutting into their business. This story is going to continue getting more interesting. We’re following it, because we’re involved in the Charlotte’s Web business. We’ve been watching it from day one.