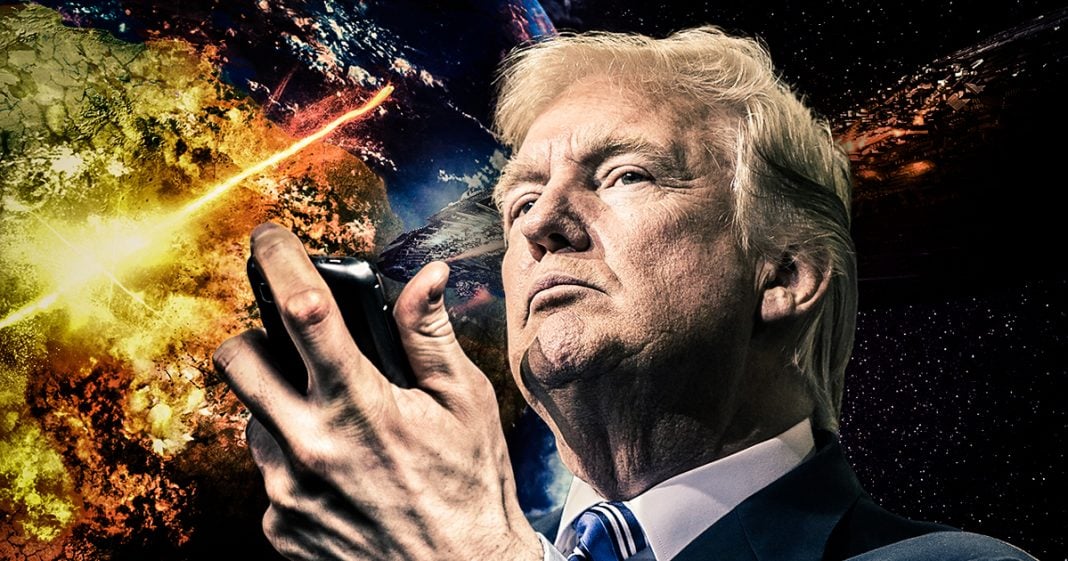 Donald Trump may have finally proven beyond a reasonable doubt that he’s not all there mentally. During a speech in California this week, the President suggested creating a “space force,” which would be a US military branch devoted to fighting in outer space. The worst part of this statement is that hardcore Republicans have been wanting this for decades, as Ring of Fire’s Farron Cousins explains.

Donald Trump: In space, the United States is going to do Colonel Glenn proud. We’re finally going to lead again. You see what’s happening. You see the rockets going up left and right. You haven’t seen that for a long time. Very soon, we’re going to Mars. You wouldn’t have been going to Mars if my opponent won. That I can tell you. You wouldn’t even be thinking about it. Space is a war fighting domain, just like the land, air, and sea. We may even have a Space Force, develop another one. Space Force. We have the Air Force. We’ll have the Space Force. We have the Army, the Navy.

Spaces Forces, a new branch of the military dedicated to Space Forces. Now maybe it’s just coincidence. But if you remember, on Monday of this week, there was that leaked video that allegedly showed military jets tracking this UFO and then on Tuesday, Donald Trump says, “Okay, we need a military in outer space.” I’m not completely convinced that Donald Trump’s decision is not based on that one particular video. Hell, maybe Tuesday he re-watched The Last Jedi and thought, “Oh my God. We’ve gotta get outer space military up there just in case they come here to earth.” Maybe he thought it was a documentary. We’ve seen him fooled by things on Fox News. So it’s entirely possible he watched a movie and thought it was reality. But nonetheless, and this is the worst part of this story, Donald Trump’s actually not the first Republican that has suggested creating outer space military for the United States. There was actually a project for a new American century document from many years ago. This was actually pointed out to me by Robbie Martin, the director of the film A Very Heavy Agenda.

This [inaudible 00:02:28] document suggested creating some kind of outer space military forces just to show our power in the United States against countries like Russia and China and to potentially intercept any kind of satellite destruction that they may engage in. So yeah, as crazy as it sounds, Donald Trump’s not even the first Republican to suggest outer space military troops. But that doesn’t make it any less crazy. The only people who are excited about this idea are the military contractors who are now trying to figure out how to make their F15 fighter jets fly in outer space or maybe they’re developing these new spaceships with rocket launchers on them because that’s gonna make them a ton of money if Donald Trump actually decides to create his Space Forces and go fight wars in outer space.