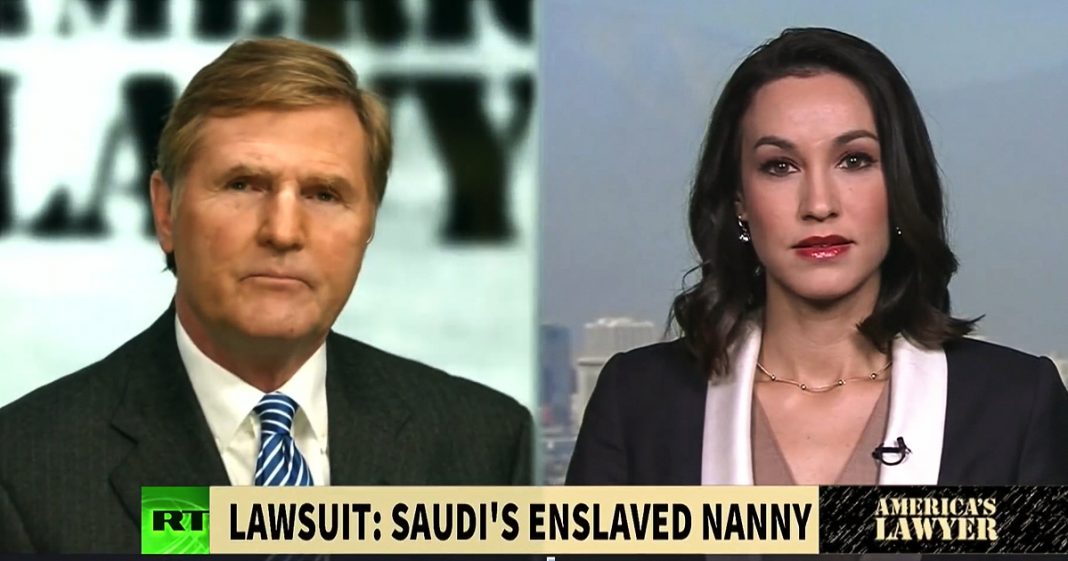 Via America’s Lawyer: Mike Papantonio talks with Brigida Santos about a lawsuit that says a Saudi Royal family enslaved a woman in their Virginia home.

Mike Papantonio: A Saudi Arabian royal family living in Falls Church, Virginia is being accused of forcing a woman into slavery. The lawsuit said the woman worked more than 15 hours a day, wasn’t allowed to leave the royal family’s home without supervision and repeatedly called a whore, a donkey, colored and garbage. Joining me now to talk about this is RT correspondent Brigida Santos. Brigida, what … This is another one of those crazy stories that you take a look at and you say it’s really more important than just this particular story, but what is the story in this case?

Brigida Santos: An Eritrean citizen named Simret Tekle has filed a complaint against a married couple from the House of Saud, the Saudi royal family. Now Miss Tekle alleges that they trafficked her to the United States and held her there and made her serve as a slave. Now she had signed a contract, which unfortunately she could not read. It was written in Arabic, but she was told that it was a contract for employment in which she would be serving as a nanny to one of the children belonging to this family in Virginia.

Now she was told she would be working 40 hours per week, that she would get two days off, and she would earn a salary of $4,500 per month, but when she arrived in Virginia, her passport was taken away. She was taken to the house where she was a servant for six children, as well the family, the parents. She was paid about $400 to $500 per month, working 80 hours per week, doing all kind s of physical labor jobs, things that were not in her contract.

Now she says that she could not escape because she was under constant surveillance. There were cameras all throughout the house, including in her bedroom, and there was an armed guard present at all times who threatened her with deportation if she tried to escape. Now luckily she did escape one day when a driver ditched her. He was supposed to be watching her but fortunately he did not, and it was lucky for her because she was able to escape. Now she’s filed this complaint and she is asking for a jury trial, Mike.

Mike Papantonio: Well you know, no question there won’t be criminal … Saudi Arabian family, we’re afraid to say this, but we understand that Saudi are the same group, financed the group that killed 3,000 Americans. We know that. We know what happened on 9/11. We understand the Saudis were involved. Nobody has been held responsible for that.

This woman, the idea of her going to a police station and saying, “Gee whiz. Shouldn’t there be some kind of criminal charges here?” is almost impossible to visualize. Is there any reaction by the royal family, and do they know if they’re still living in the US after this complaint was filed?

Brigida Santos: There has been comment from the Saudi royal family and in fact they have not been available for reporters at all. Now we don’t know whether they are still living here, but it’s very likely that they are because they are residents of Virginia and their children go to school here and they really have no reason to flee because they do enjoy broad diplomatic immunity from any types of crimes, Mike.

Mike Papantonio: Yeah I think this, again this story compared to the Saudis financing the murder of 3,000 Americans is, you can’t make a comparison, but you can make a comparison to the conduct of the US government. We know after … It was very clear that the Saudis were involved in killing 3,000 Americans. The government actually helped sneak those people out of the United States, the Saudis they thought might have been involved and into a safe place called home. This woman is an immigrant. Do you know if the US courts will factor this in, if she and her lawyer pursue this case? In other words, does this situation have any precedent at all?

Brigida Santos: There is no precedent and in fact, may people have filed complaints against members of the Saudi royal family diplomats. This includes immigrants as well as US citizens and most of those cases, if not all of them have been dropped due to the fact that they get this broad diplomatic immunity. I don’t know if the courts are going to factor in the fact that she is an immigrant but if they do, I don’t think it will end well for her, especially because the United States and Saudi Arabia are such close allies. It’s unlikely that we’re suddenly going to start prosecuting members of the royal family here.

Mike Papantonio: Yeah, again, we didn’t prosecute them for their involvement in the death of 3,000 Americans so it’s doubtful that we’ll see that here. You know, what’s interesting, this isn’t the first incident of slavery by a royal family member. A similar case was taken up in the UK. Give us the picture of what happened there in the UK, when they found themselves in a very similar situation.

Brigida Santos: Last year, a Saudi diplomat’s maid won a landmark case in the United Kingdom. This was a very similar case to the one that we’re seeing out of Virginia, in which a maid from the Philippines was trafficked to the United Kingdom and held against her will, doing all kinds of tasks that are illegal. Now she appealed to the UK Supreme Court, and they ultimately ruled in her favor, stating that the Saudi diplomat in his actions with her were outside of his official duties and therefore he was not going to be immune from his actions here. Something similar could happen in the United States, although again, it’s very, very unlikely, seeing as how many times people have filed complaints against diplomats and they’ve gone un-investigated.

Mike Papantonio: Yeah. Well it’s all about oil. It’s all about the fact that they own so much of our US, of our government in so many ways, but they also own businesses. They own so much commercial property in this United States that right now, it’s hard to differentiate whether they’re actually active American citizens or Saudi family, Saudi royal family. That’s how bad the problem’s become. If you take a look … So many articles have been written about this. It is that it becomes almost impossible to hold them to the same standard of the law that the average American is held to. They’re simply above the law. They have diplomatic immunity every time they need it.

As a matter of fact, how extreme can we possibly make that picture when we consider that we know that there is zero question, zero question about the fact that the Saudi money actually paid to have 9/11 take place on our soil, and today we’re going to see the president holding hands with some Saudi over in the Mid-East, talking about how important their relationship is with the United States. The problem is we have to be honest about what our relationship really is with the Saudi royal family. Is there any official probe, either by the US or any agency regarding this practice, of what we just discussed in these two cases?

Brigida Santos: As far as I can tell, there is no official probe. Now in Saudi Arabia, where abuses are rampant against domestic workers, there are investigations that have been brought forward by countries like Indonesia, Sri Lanka and Kenya to name a few, but no official investigation in the United States. As you said, we continue to sell weapons to the Saudis, despite the fact that they finance the attacks on 9/11.

Mike Papantonio: Right. Full disclosure. I’m bringing a lawsuit against the Saudi families for actually paying for terrorism in the United States and I know an awful lot about where this money connects up. We think that by the end of the lawsuits, that by the way, we’ve been granted to bring because the law has been changed. We now can sue the Saudis in the United States for their involvement with US terrorism. I think we’re going to find out a lot in the civil cases that my firm and a coalition of lawyers are bringing to actually uncover and kick over this very dirty log that we seem to be so willing to ignore. Thank you for joining me Brigida.