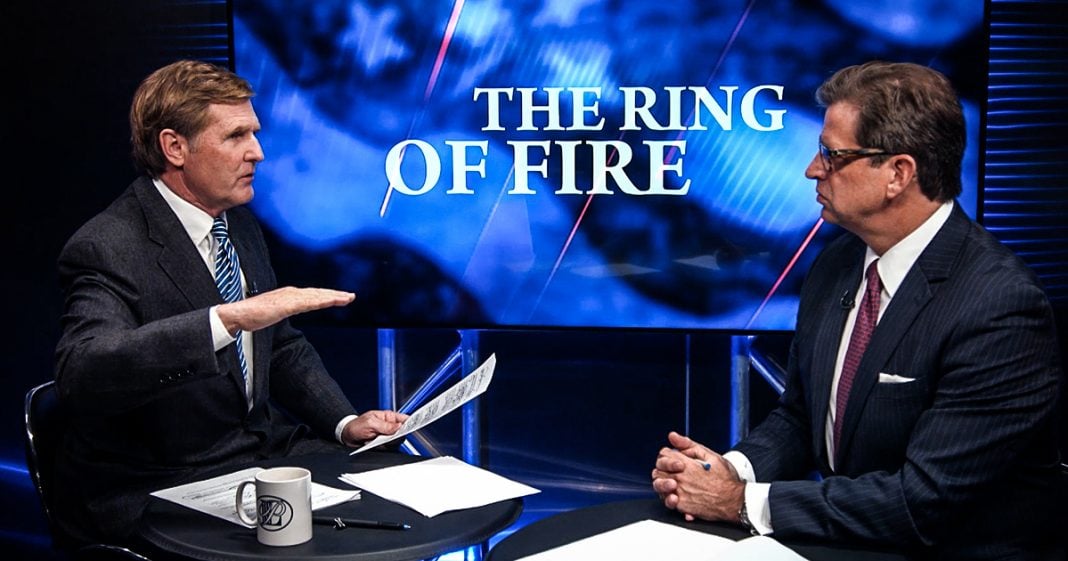 Big Pharma has been spending big bucks on their lobbyists recently, trying to prevent Congress from taking action to stop their price gouging. But so far it isn’t working, and American citizens are getting sick and tired of paying ridiculous markups for their medicine. Ring of Fire’s Mike Papantonio and Peter Mougey discuss this.

Mike Papantonio: Big pharma has been spending big bucks on their lobbyists very recently trying to prevent congress from taking action to stop their price gauging. We know it’s out of control. But so far it isn’t working, and the American citizens apparently are getting sick and tired of paying ridiculous markup prices.

First of all, let me talk about those myths. A, the research and development, and if it’s 12%, that’s extraordinary. Sometimes they like to say it’s as high as 20%. The real outlay you see on MSNBC, ABC-

Mike Papantonio: Advertising at night where you watch … you’re watching the news, and you see nine pharma commercials telling you that-

Mike Papantonio: … your legs are restless, that you can’t sleep, you got erectile dysfunction, whatever it is.

Mike Papantonio: Yeah. It’s so ubiquitous. So they’re spending all that money that they want to say, “Oh, well poor us. We’re having to do research and development,” that’s the first part of it.

Second part, most of the research and development doesn’t even come from the pharmaceutical industry, it comes from the National Health Organization, it comes from universities. Tax payers have already paid for all this. And then all that happens is they swoop in, they make it into a cash cow drug, and they fly out of there. CEO’s make a ton of money, they don’t do any kind of really meaningful clinicals as far as safety anymore, they don’t have to. They simply don’t have to.

They make $10 billion on a drug, if it kills a few people they pay out a billion dollars and they go home with $9 billion. So it’s a real good deal for them.

But this story, what I love about this story … I’m not sold on this, by the way. I’m not completely-

Mike Papantonio: Well this comes from the hill. The part saying that they’re losing, pharma is losing where it comes to telling their story, “Oh poor pitiful me.” What is your take on this? I don’t think they’re losing. My God, their markup is sometimes 7,000%.

Peter Mougey: I mean all you got to do is look at their earnings per share, and the stock prices-

Mike Papantonio: Well you do that every day.

Peter Mougey: … and they continue to go up, so I mean there’s no way that big pharma is losing. I mean that’s ludicrous. You just got to look at the profits and the market capitalization, they’re hardly losing. And no one questions whether they need a solid return based on the drugs they make. But at the end of the day, you can’t-

Peter Mougey: Yeah, that just …. No, no, no, no. I’m not saying … But at the end of the day, there’s got to be some rationalization, some correlation between the price of the drug and what they’ve spent.

Mike Papantonio: Okay. Every time congress has been asked, “Why don’t you do the same thing with pharma that you do for the VA?” And that is, under no circumstances may you charge more than this price.

Mike Papantonio: Under no circumstances.

Mike Papantonio: Okay, so do you know how many times in the last three years this has come up in one form or another? At least four or fives times, that I can remember.

Mike Papantonio: Yeah, it’s come up to where congress has asked to set some standards. Go ahead and give us a ceiling. Let me tell you something, as you know this is … Something I specialize in is suing pharmaceutical companies that kill people with dangerous products, it’s what I’ve done for 30 years.

The last three pharmaceutical cases that I’ve handled, where I’ve taken deposition, I always ask the question, “Why is it that you charge $20 for a pill over here in Germany, but for that same pill you charge $150 in the United States?”

Peter Mougey: And what’s the answer?

Peter Mougey: It really is embarrassing. I mean at the end of the day, they’ve dumped so much money into lobbyists, there’s so much pressure in D.C., the pharma controls what decisions are being made, that we allow big pharma to take advantage of the American public, and no one takes a step to protect them.

Mike Papantonio: What they’re doing here Peter, this is the ugly part of this story too. This story talks about the idea that they’re trying to confuse the American public by saying … They’ll come out with an ad, they’ve got these ad series that you’re going to be seeing in the next few weeks, it’s called Share the Savings as part of their ad series. The other series is called Let’s Talk About Cost.

Now what they do with this, is they make it so damn confusing as they’re doing the segment. They try to say … they do a 30 second spot, and at the end of 30 seconds they try to blame bureaucrats-

Mike Papantonio: They try to blame hospitals, they blame the insurance industry, and they say, “Well, that’s the problem.”

You know what the actual landing line on that should be? They uniquely, and only them, control the right to reduce costs to pharmaceuticals, okay?

When Valeant … You remember the story of Valeant?

Mike Papantonio: Valeant was caught … they were raising pharmaceutical prices 7,000% and 8,000% on life saving drugs. And in between the time that they first started doing that and somebody would object, they said, “Oh, well that’s because of insurance, it’s because of government involvement. The government’s really responsible for this.” When they really found out they had to admit that, yes, none of that really matters. We can lower our number today, we can go from 7,000% back down to 10% if we want.

Peter Mougey: At the end of the day, why don’t they? And that begs the question of why they don’t.

Peter Mougey: But who … but where does that money end up at the end of the day? And I think this is what’s fascinating. So you’ve got some senior management, and how do they get paid? You’ve heard me talk about this repeatedly, they get paid with stock options. That’s where most of their money comes.

So the senior management of these pharma companies want to drive up profits just insanely and artificially, as much as humanly possible, so they can exercise their options and capture what’s called the spread.

Mike Papantonio: Congress could do that tomorrow.

Mike Papantonio: Congress could do that tomorrow.

Peter Mougey: And you’d see a lot of this stuff go away.

Mike Papantonio: Okay, but here’s one of the problems. When we’re talking about congress, those greedy little freaks, this is an industry that spends a lot … about $2 billion a year, spreading money around.

Mike Papantonio: So I mean, you’re never going to have Cory Booker … remember Cory Booker comes out, the issue comes up in front of Cory Booker who’s … And by the way, another potential presidential candidate. He comes out and says, “I can’t support forcing pharma to reduce their prices.” Do you remember this?

Peter Mougey: Mm-hmm (affirmative), I do.

Mike Papantonio: And everybody asked Cory Booker, “What are you talking about?” Cory Booker goes back to the argument, “Oh, it’s R&D.” Somebody shows him, no it’s not R&D. R&D is about 12%, the rest goes to advertising, he still takes the position-

Mike Papantonio: They’ve give him so much money.