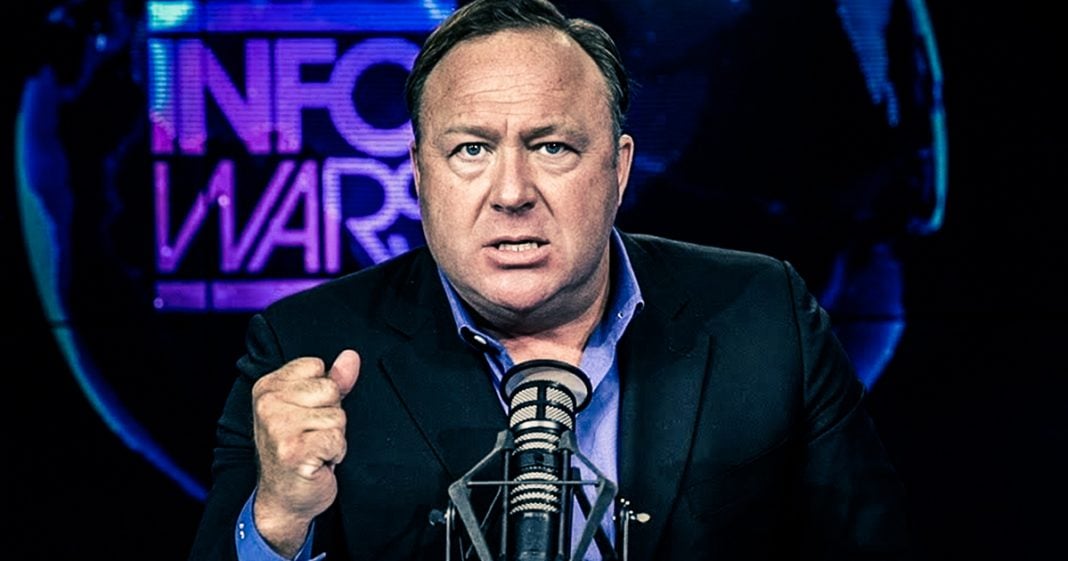 A private citizen that has been the target of Alex Jones and InfoWars has filed a suit to stop Jones and his group from spreading false information about him. The man filing the suit was the one who filmed the violence at the Charlottesville march, and Jones claimed that the man was a part of the Deep State, resulting in him being the subject of death threats and targeted harassment from Jones’ followers. Ring of Fire’s Farron Cousins explains how this lawsuit might finally put a stop to the constant barrage of conspiracy theories and fake news peddlers in the United States.

Alex Jones and Infowars and several other far right organizations are now facing lawsuits from a man that has been defamed by these organizations and people ever since he filmed the vehicle in Charlottesville that killed a protester last year. Here’s what happened. Alex Jones, Infowars, and a couple other far right websites decided to attack the guy that filmed the murder of this woman in Charlottesville. They attacked him as being part of the deep state, because the guy actually happens to work at the State Department. They used his name. So what happened to him was that he began to be physically and verbally assaulted when he would leave his home. His parents’ address was posted online, and they began receiving death threats. He received death threats. They threatened to release information about him online. They basically attempted to ruin his life over this lie that has been spread by Alex Jones.

So now, they’re being sued for defamation for spreading this fake news by the man, Brennan Gilmore. He was the man who filmed it. He was the man they targeted. Now, he is the man trying to bring them to justice for their constant lies and propaganda and conspiracy theories. This particular lawsuit has the potential to change the media landscape in the United States. This is a very smart move. It is a very brave act. To be honest, it’s the only recourse that this man could ever hope to receive for these far right trolls trying to ruin his life.

If this lawsuit is successful, this is going to put Alex Jones, Infowars, Daily Caller, Breitbart, all of these organizations on notice that if you spread lies and propaganda and fake news, you can be held legally accountable. It’s going to hit you where it hurts the most, in your checkbook. We’re going to take your money away. We’re going to boycott your advertisers. Hell, maybe even rope them into the lawsuit as they tacitly support what you’re doing here. This lawsuit is much bigger than it is getting credit for. This isn’t just about one man’s fight to repair his life after Alex Jones and his followers ruined it. This is about stopping the spread of propaganda style conspiracy theory fake news in the United States.

Since we know the government’s not going to do anything about it, they already declined a program to help college students and high school students differentiate between fake news and the truth, the court system might be the last best hope that we have to finally weed out and completely stamp out the fake news problem that the United States is very clearly suffering from.