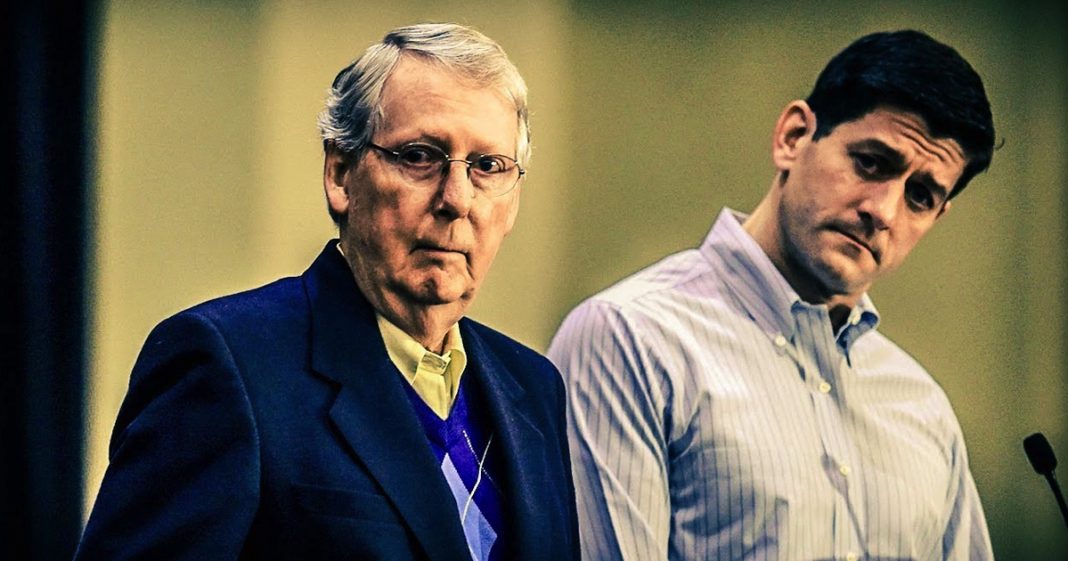 Republicans are starting to realize that the American public isn’t buying their lies about tax cut trickle down, and they’ve nearly stopped running ads touting their much-ballyhooed plan. This isn’t going to end well for Republicans in November, and their reluctance to even mention the tax cuts already shows that they are getting scared. Ring of Fire’s Farron Cousins discusses this.

The Republican party is in full-blown panic mode these days, as they understand that their message about tax cuts trickling down to the average American worker are falling flat, and that most Americans actually don’t believe that they’re ever going to see a raise from these Republican tax cuts.

Now, I wonder why that is? Could it be the fact that corporations have admitted that they’re not going to use that tax cut money to reinvest in their employees? Could it be that interviews with actual Trump and Republican voters have shown that these people aren’t getting raises of any kind? Or maybe it’s because Republicans are just tired of lying to the American public.

Now, I don’t believe the latter whatsoever, but I do believe Republicans understand that the American voters out here know that they aren’t getting raises. Yeah, some people got bonuses. Yes, some people got raises. Some companies are using a small percentage of their tax cut money to give people raises. Most of them, and most of the money, is being used to buy back their own stocks to artificially inflate the value of their companies, and to increase the dividends provided to shareholders. That’s where that tax money is going, and Republicans can’t lie about it anymore because report after report is showing us that they’re not spending the money on American workers. And again, they’ve admitted that they’re not going to do that.

Republicans don’t have a message anymore. Their original message was, “We were going to repeal and replace Obamacare.” Well, it turns out people actually liked Obamacare, and freaked out when they thought Republicans were actually going to follow through on that. Then they were telling us that is was those tax cuts that were going to trickle down to the American worker. Well, that one has also been taken away from them now. They’re heading into, not only this special election in Pennsylvania with no message as a party, they’re heading into the midterm elections with no clear message. And what’s even worse for them, is that as this year continues, as we get closer to those midterms, more and more people are going see that their paychecks are not increasing as a result of those Republican tax cuts, and they’re going to be pretty pissed off when they head to the polls this coming November.