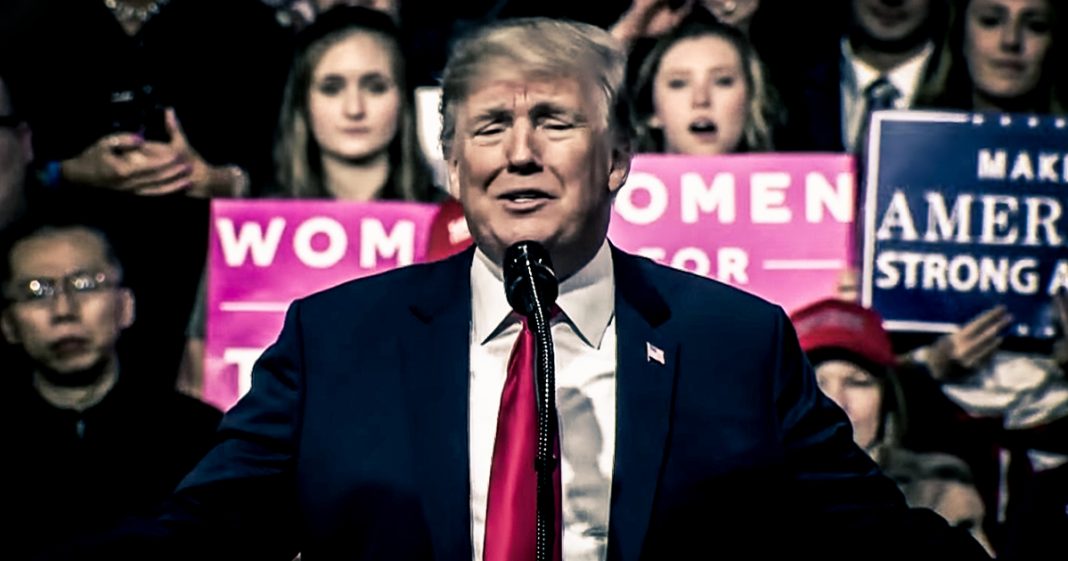 In what could likely be one of his most unhinged tirades to date, Donald Trump called Democratic Representative Maxine Waters a “low IQ individual” during a campaign rally in Pennsylvania this past weekend. He also attacked MSNBC’s Chuck Todd by calling him a “sleepy son of a bitch,” and went on to suggest that we should just execute drug dealers. Ring of Fire’s Farron Cousins explains why we cannot let this kind of behavior become the new normal for politicians.

On Saturday at a rally for Rick Saccone, a Republican candidate in the state of Pennsylvania, Donald Trump gave what is probably his most unhinged tirade against pretty much everybody he could think of in the United States.

First and foremost, one of the worst things that Donald Trump said during that little campaign rally was that Democratic representative Maxine Waters was a “very low I.Q. individual.” He was saying this because Maxine Waters is somebody that believes that Donald Trump should be impeached. Donald Trump began mocking her, saying she was “very low I.Q.,” that “she can’t help it, that’s just how she is.” The crowd, apparently, seemed to enjoy him mocking this African American woman who’s accomplished a hell of a lot more than a guy like Donald Trump ever could.

Then he want on to attack the media. Specifically, he attacked MSNBC host Chuck Todd by calling him a “sleepy son-of-a-bitch.” He then went on to say that we should execute drug dealers in the United States, something that other countries that operate under brutal dictators love to do; but as we’ve seen recently, Donald Trump loves to praise those dictators all across the globe.

There is a pattern of behavior developing here with the President of the United States. First and foremost, his attack on Maxine Waters was not just an attack on somebody that wants him impeached. It was a racist attack on somebody that wants him impeached based on absolutely no evidence whatsoever. Donald Trump has never seen an I.Q. test performed by Maxine Waters. She’s never done anything in public life that would suggest that she’s not an intelligent individual. Yet Donald Trump decided to single her out personally, even though plenty of Democrats from top to bottom, coast to coast, have called for the exact same thing. Why her? Because she’s an African American woman. Donald Trump is not the kind of person who is in any position whatsoever to make fun of somebody else’s I.Q.

Furthermore, attacking Chuck Todd, “sleepy” Chuck Todd, as Donald Trump says, making fun of I guess the fact that his eyes are semi-closed sometimes, so he’s attacking this guy’s appearance. If anybody has ever seen what Donald Trump looks like, you understand that this is also not a guy that should probably be mocking other people’s appearances.

The bottom line is this: We cannot allow this behavior to become the new normal for presidents or any politician in the United States. This is an important issue. There were children at that rally. There were children watching that rally because every single cable news outlet decided to run it in its entirety as if it was some kind of actual news program. Children are watching.

Donald Trump is probably the worst role model we have ever had on the national stage, at least since I’ve been alive. Possibly even long before that. He is a disgusting human being, and the people who still support him, who go to those rallies and say, “I like to hear these things,” they are equally as disgusting. Anyone who supports Donald Trump is a disgusting, hate-filled individual. Donald Trump has shown us what he is. If you still think that that’s okay, then you are suffering from some very serious problems that I suggest you go get checked out immediately before you become a danger to everyone else in this country.