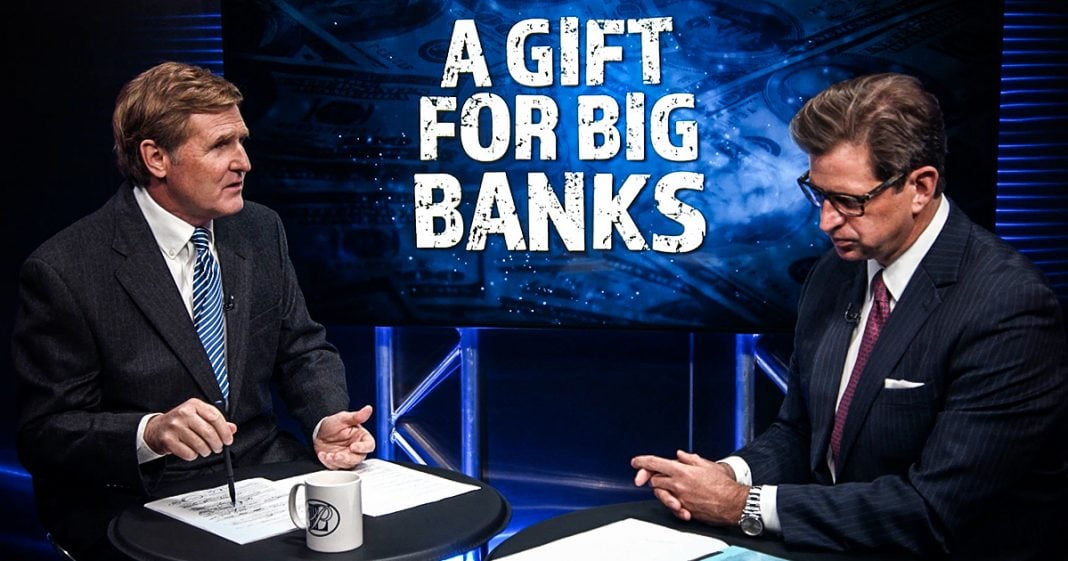 The Senate passed legislation this week that will repeal protections that had been put in place with the Dodd-Frank Act. This move will leave us vulnerable to even more criminal activity from America’s biggest banks. Ring of Fire’s Mike Papantonio and Peter Mougey discuss this.

Mike Papantonio: The Senate passed legislation this week that’s going to repeal protections that had been put in place with the Dodd-Frank Act. This move is going to leave us vulnerable, even more criminal activity is going to take place with America’s biggest bank. Now, Peter, this is right up your alley after the first theft by the big banks, they stole gazillions of dollars from the American public. You brought lawsuits against some of those thieves. You brought hundreds of lawsuits against those thieves. Shearson Lehman, they escaped totally, right? Shearson Lehman, if you lost $100,000 because of Shearson Lehman fraud, you maybe got back $15,000.

Mike Papantonio: That was kind of the ratio. And then taxpayers came in they really bailed out these other organizations. So talk about this a little bit. We got Congress saying, “You know, we need to do this again.” That’s basically what this is advising. Let’s do this.

Peter Mougey: To really kind of frame this up. The Dodd-Frank Act came out right after the huge market meltdown in 2007 and 2008, and that market meltdown was built on Wall Street greed. Essentially taking risk that benefited CEOs, senior management, but that risk was shoved on to shareholders and ultimately American taxpayer. So right after that decline, Congress, the Obama administration put in all kinds of safeguards. It said kind of too big to fail. So there were all these tests, and let’s use one because it’s kind of an easy one. Stress tests. Stress tests are the banks run and they say, “I’ll tell you what, we’re going to run this stress.” What happens if the economy collapses? What happens if inflation, the dollar, it comes in and it tests and stress the banks and says, “Where are your weak spots?”

It’s costly, it takes some time, but it’s very, very … It protects the American consumer and makes sure that the banks aren’t taking too much risks. Well, Wall Street’s done a phenomenal job. The banks had done a great job, employed thousands of lobbyists, spends hundreds of millions of dollars lobbying. So Dodd-Frank never really gets implemented. Just small bits and pieces of it. So now fast forward all the way to the new proposed bill.

Mike Papantonio: Back up just a second. People don’t even realize it. They think Dodd-Frank is out there, but, no, Wall Street has stopped it at every turn.

Mike Papantonio: Every turn. So we don’t even have the full benefit of Dodd-Frank.

Peter Mougey: Not even a fraction of it. There was hundreds and hundreds of proposals. A small, tiny amount of them were passed mostly because Wall Street beat them back through lobbying.

Mike Papantonio: Okay. This is one proposal.

Peter Mougey: It’s an argument though, which always drives me nuts. The argument is, oh, these are too costly. These are too expensive. They’re too time consuming. It slows down growth, it impedes lending, it restricts capital. But at the same time, I mean, how many trillions of dollars were caused by Wall Street’s greed in the ’07 and ’08 collapse? So now what they’ve done is that Senator Mike … It is Crappo, Crapo?

Peter Mougey: Crapo. I always forget how to pronounce his name. Maybe Crappo but might be a little better.

Peter Mougey: He’s the chairman of the Senate Committee of Banking and they’re pushing this back and effectively. It looks like they got enough votes. They need 60 votes. [crosstalk 00:03:15]

Mike Papantonio: What about this, Peter? What about this? Now, look, the thing that you’ve talked about so much when you bring these lawsuits in your pleadings, you talk about wild risks.

Mike Papantonio: You talk about the idea that these banks understood the wild risk that was involved, but the risk, taking those wild risks, puts so much money in their pocket. And at the end of the day, after they’ve lost all the money, with sheer incompetence and greed. There’s no other reason. They were incompetent fools along with being greedy fools. So after they lose this money, the taxpayers come in, they bail them out and they get to keep all the money they made. The CEOs keep every little dime. There’s a second part to this that really bothers me. Now, you talked about there needed to be under Dodd-Frank, this small part of Dodd-Frank, is the stress test.

Mike Papantonio: Let’s take a look and see if you can withstand-

Mike Papantonio: … a problem. Okay. But the second part is how about telling us what you’re gonna do when you fail? This idea of sell off in liquidation. There was some protection there too, was there?

Mike Papantonio: Well, what it was is we wanted to look … If you are a bank and you had a $50 million-

Mike Papantonio: Billion, billion dollars, then you’re going to fall within this test.

Peter Mougey: You’ve got to run these stress tests.

Mike Papantonio: They want to raise the-

Peter Mougey: Countrywide’s the one that bothers me the most because they’re the ones that caused a ton of the spending.

Peter Mougey: Was the first one to climb.

Mike Papantonio: And if this passes, they get a free ride because they say, “Hey, we’re not a $250 billion operation.” But if you look at the money they lost, it was massive. And taxpayers came back and paid their debt.

Peter Mougey: Think about some of the banks that went under. I mean, you’ve gotta be kidding me. We can’t run stress tests. We’re going to decrease the transparency all to increase the flow of capital. And I mean, a couple of words come to mind. Short term memory. I mean, are we really going to take away these protection?

Mike Papantonio: Well, let me just tell you something. You talked about this being Crapo, Crappo-

Mike Papantonio: … that went forward with this is Republican. There were 13 Democrats in the Senate. [crosstalk 00:05:52] 13 Democrats.

Peter Mougey: You know what that is. That’s the lobbying money and the political contributions-

Mike Papantonio: That wanted to bail out the pharmaceutical industry. Cory Booker is kind of exhibit A of this type of politics.

Mike Papantonio: But I mean if you really [crosstalk 00:06:25] Let’s call some names. I mean, Heidi Heitkamp from North Dakota. Donnelly, Joe Donnelly from Indiana. I mean, these are people that they hold themselves out as being, “Yeah, we’re one of you. We care about people issues.” I got to tell you something. You know, some of these people, they always want to be up front on social issues. Gender, they’re out front. Race they’re out front. They’re out front on important issues. But where it comes to issues that put food on the table for people, buddy, they’re gonna side with Wall Street every single time. This was just 13 in this particular one, but if you go back and you take a look at what’s happened this year in similar kinds of legislation, these people call themselves Democrats. And the public who really doesn’t even have a sense what a damn Democrat is anymore, just says, “Oh yeah, they’re Democrat. They must be for us.”

Peter Mougey: Before we move on to another story, the easy part of this to fix is to change the way that risk is shifted to the taxpayer. That’s what you touched on earlier. If they just kept the risk born within that senior management, the ones that pocket the money, if it does well with the stocks and the options. If we just took that away and kept the risk back at the corporate level, you’d see these problems melt away.