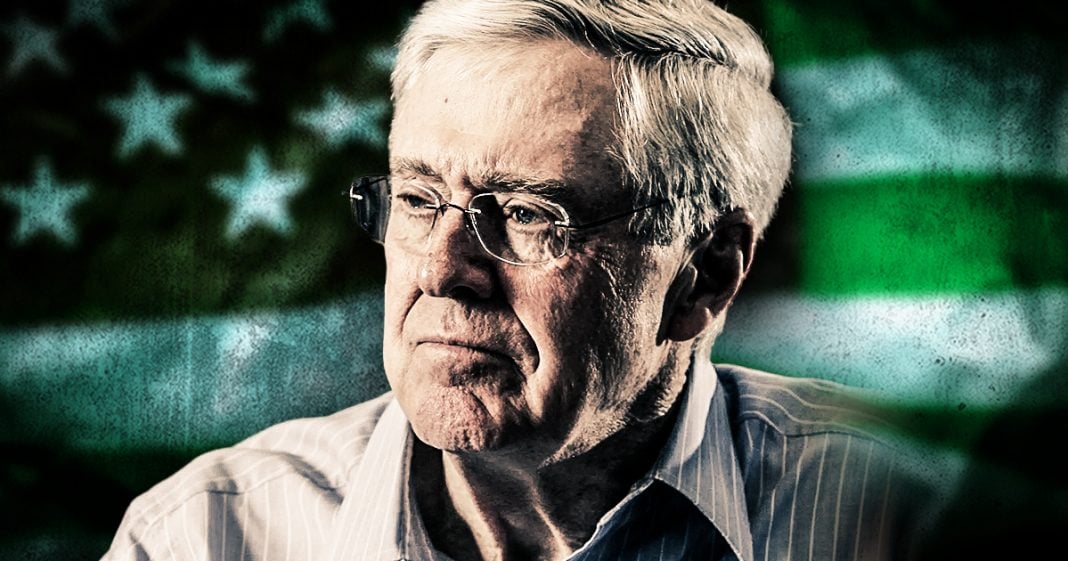 In a recent op-ed that appeared in The Washington Post, Charles Koch whined about the fact that the wealthy elite and corporations have too much power over politicians in the United States. Either Charles Koch is suffering from dementia, or he’s conveniently forgotten about the billions of dollar that he and his brother have poured into the Republican Party over the years to get their corporate wish list fulfilled. Ring of Fire’s Farron Cousins discusses this.

Charles Koch, one half of the Koch brother family, the other half being David Koch, recently wrote an op-ed that appeared in The Washington Post where he whined about the fact that the wealthy elite in this country just have too much power and influence over our elected officials. Let that sink in for just a moment. Charles Koch, the guy who with his brother have poured well over $1 billion in the United States political campaigns and lobbying activities in the last few years, thinks that wealthy people like himself have too much influence over American politics.

Now he’s 100% right, they do. But I don’t think he actually gives a shit whether or not wealthy people do, because that’s his whole thing, that’s what his entire life is based on, being able to buy and sell politicians as if he’s trading stock, because for him and for other wealthy people like the Koch brothers, that’s what this is. This is gambling. It’s betting on which politician is going to go and do your bidding. That’s why the Koch brothers gave Paul Ryan $500,000 in campaign donations after he passed the tax cut reform act that gave the Koch brothers billions and billion of more dollars.

Rich people do have too much influence, but Charles Koch is exhibit A of rich people having too much influence over our politicians. Here’s a few choice lines from his little op-ed where he opined the fact that he has too much influence. Our entire economy is rife with cronyism. Well, so is the White House at this point too. Our lawmakers must act on behalf of all Americans, not just the privileged few. Yeah, I agree. When large companies can pressure politicians to force everyday Americans to fork over unearned millions, we should all question the fairness of the system.

I can only assume that based on the things that Charles Koch is saying here in this op-ed that he is not going to give anymore money to any politicians ever, that he is going to immediately shut down Americans for Prosperity, the group that he’s been funding for years, that he’s going to stop all lobbying activities by Koch Industries, and the Koch brothers are just going to slip off quietly and go somewhere and retire, right?

I mean if you’re complaining about it, if you think it’s a problem, then you start with yourself because your entire existence is predicated on being able to buy and sell these politicians that enact these horrible policies that benefit you but screw over the rest of the country. If you honestly had a problem with it, then I would expect that no check will ever be written from a Koch brothers, from a Koch brother business, or from any of your little think-tanks and lobbying groups ever again, because if you do, then you’re once again proving what a hypocrite, a liar, and worthless sack of crap you truly are.