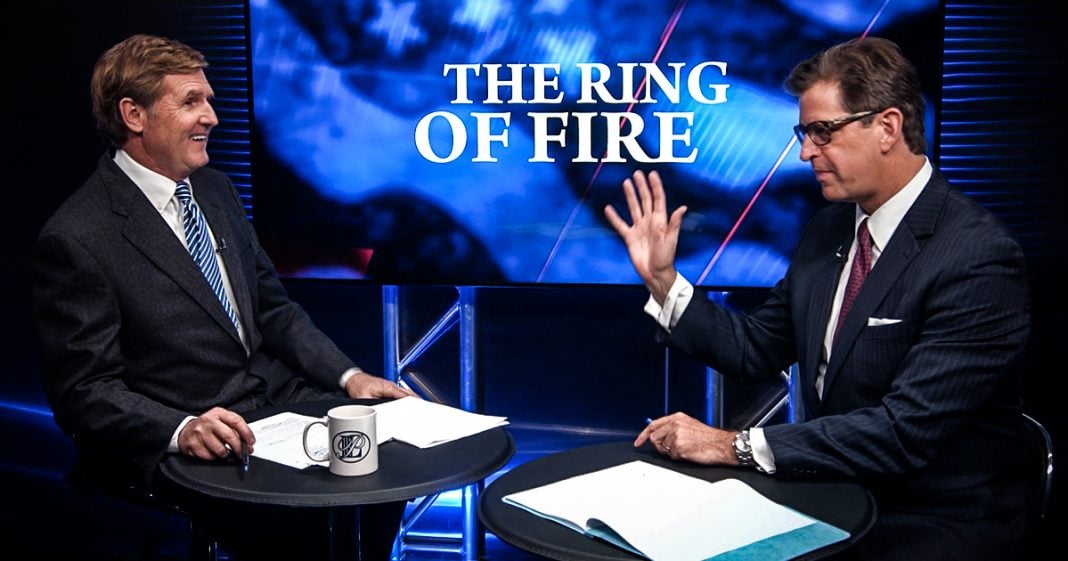 Scott Walker – the Republican governor of Wisconsin – is being sued by a Democratic-led group for refusing to hold special elections to fill empty state house seats. Walker is afraid that his party is going to lose control of the statehouse if he holds those elections, so he’s basically decided to suspend democracy in the state. Ring of Fire’s Mike Papantonio and Peter Mougey discuss this.

So he’s basically decided to suspend democracy totally in the state. What he’s counting on. What is your take on this story? Why would he make such a move?

Peter Mougey: Well, his thought if pretty obvious. Once the national cycle comes into play and we get these smaller elections into a national cycle, the chances that Trump swoops in and helps bolster up the Republican candidates and he gets his two people in there and fills these seats during a national election, he’s trying to maximize that probability. He knows now, if he runs these elections today, right now, that the chances of him losing those elections, by him meaning the Republican party, and putting a couple of Democrats in there, is pretty significant.

So he thinks if he can slow it down, jam on the brakes and stop these kind of odd timing elections from running, he increases the [crosstalk 00:01:13] chance that he keeps control in Wisconsin.

Mike Papantonio: So legally, if you were filing a lawsuit, how would you characterize the lawsuit?

Peter Mougey: It’s called a writ. And a writ forces the government do something that they’re obligated to do.

Mike Papantonio: So writ of mandamus.

Mike Papantonio: You know, I looked at this story. Yeah, writ of mandamus, people don’t realize-

Mike Papantonio: Or you’re selling the government writ of mandamus, “You’re supposed to do that, but you’re not doing it,” and that’s what’s happening here. Interestingly, Eric Holder, now you know, the Eric Holder story. I’ve talked about this so much. Here’s a guy that he comes from the most silk stocking defense firm in America. Covington Burling.

Mike Papantonio: Now for some reason, he’s appointed to be the Attorney General of the United States, even though his role at Covington Burling was to actually defend most of the creeps that he’s supposed to be going after as Attorney General. The conflicts were endless. He wouldn’t prosecute the banks, he wouldn’t prosecute big pharma, he’d very rarely enforce any kind of meaningful anti-trust, because he comes from that industry. The industry of lawyers who represent big corporations.

Mike Papantonio: But what I think is interesting about Eric Holder, he’s the one that’s signing off on this writ. It’s because I remember him being Attorney General, you may remember this yourself, and he starts this idea, “Well, we’re going to do something about voter fraud. We’re going to do something about voting irregularity across the United States.” I remember him coming out making this speech all this is going to happen in 90 days.

And we waited and nothing. Just some of the same. It was a great speech. You know, great speech about what he’s going to do. But I think what he’s trying to do here, you know there’s some talk about him positioning himself maybe for a presidential run. If you really start understanding what an empty suit Eric Holder is, I mean. Sessions is just bonkers.

Mike Papantonio: You know, Republican is just completely bonkers. This guy was more dangerous because he was an empty suit who would make promises and nothing would ever come of it. But on this all centers around gerrymandering isn’t it? If you take a look at the last few times the court has tested gerrymandering, they’ve lost every time.

Mike Papantonio: The people who gerrymandered Democrats out of existence basically lost every single time. Isn’t that part of the issue that’s going to develop in Wisconsin?

Peter Mougey: Absolutely. I mean this whole thing is, at the end of the day, trying to keep control in the Republican part of Wisconsin state politics and that’s what all this is designed to do. So at the end of the day, we’ll keep an eye on this. I mean, it’ll be interesting to see if in fact they make the writ can actually require the government-

Mike Papantonio: It should.

Mike Papantonio: He has no real … He’s not even given a real answer, so a writ of mandamus says to him, “Look, you’re the Governor, you know you’re supposed to hold these elections public,” and a court can make him do it if the court has [inaudible 00:04:39].

Peter Mougey: Yeah, the state law requires a Governor to call a special election to fill any legislative vacancies before the second Tuesday in May in the year in which a regular election is held. And the Governor’s office argues that the deadline does not apply because the vacancies occurred in ’17. That doesn’t make any sense.