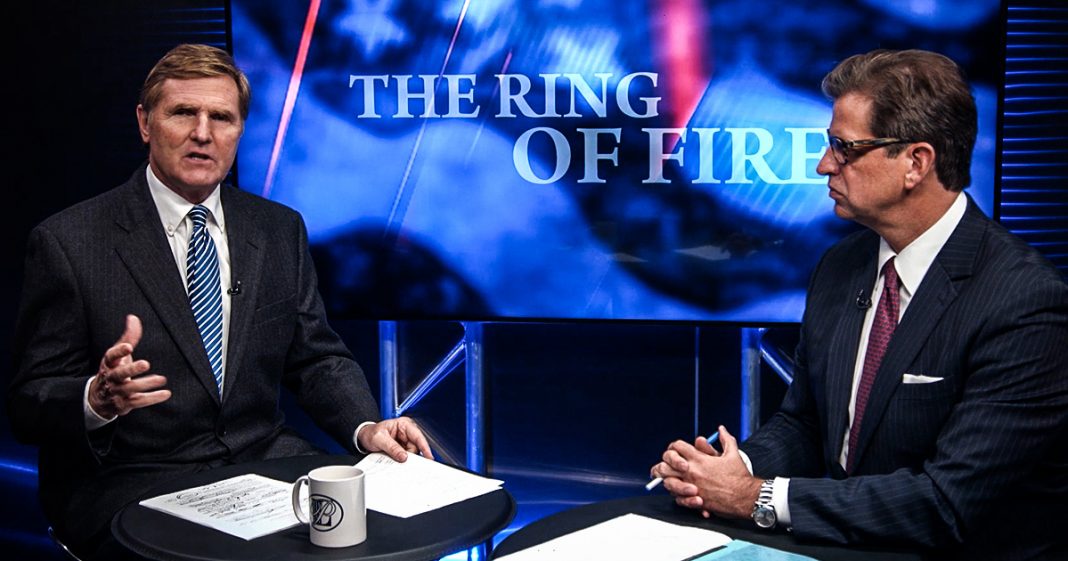 A Saudi Arabian royal family living in Falls Church Virginia is being accused of forcing a woman into slavery. The lawsuit says the woman worked more than 15 hours a day, was not allowed to leave the Royal Family’s home without supervision, and repeatedly called a whore, donkey, colored, and garbage. Ring of Fire’s Mike Papantonio and Peter Mougey discuss this.

Mike Papantonio: A Saudi Arabian royal family living in Falls Church, Virginia is being accused of forcing a woman into slavery. The lawsuit says the woman worked more than 15 hours a day. She wasn’t allowed to leave the royal family’s home without supervision, and she was repeatedly called a whore, a donkey, colored and garbage. She’s initiated this lawsuit and she’s got some real precedent for this.

First of all, here’s the problem, they’ve been seeing in these royal family or royal diplomat kind of cases is the immunity, that they have diplomatic immunity. Now the good news is, in the UK, the Supreme Court in the UK said we don’t care about diplomatic immunity on this, when it comes to these civil kinds of issues, especially where it comes to something that they almost characterized as slavery. This woman was being held there in the UK, the same way that this woman was held. She was Filipino and the Supreme Court went a long way to say you know what? We’re going to find a way around this and they did. What is your take on this case?

I guess what bothers me most about it is the times we’ve given the Saudis so many breaks. I mean, really Peter, they killed 3,000 people. Their money financed the group that killed 3,000 Americans on American soil. So what do we do? We help them get out of the country. Remember this whole story? They sneak out of the country. Nobody can find out where they are. The whole royal family is moved back home with the CIA, after we know or are pretty darn sure that the money, the financing actually came from Saudi Arabia. We got to do something about having …

Peter Mougey: It’s an easy answer, really. I mean if you have a US citizen or somebody that resides in the US, even if it’s on a work visa, versus diplomatic immunity, you weigh that out. Which one of those deserves protection? There is absolutely no way we can say that diplomatic immunity applies to an otherwise …

Peter Mougey: An act of slavery.

Mike Papantonio: That’s the narrow exception at this point.

Mike Papantonio: The thing that they carved out that’s very obvious here is they carved out, you know where it comes to slavery, we’re not really going to give you any kind of breaks. But this one in the US, this is going to be a good test. Here’s a woman, she was basically held as a slave, and so she’s brought the lawsuit against the Saudi royal family. As a matter of fact, before an investigation could even take place, it seemed like they were moved by the government, moved them somewhere else. It’s this relationship with Saudi Arabia that we have to make inroads to.

You know our law firm, obviously, is bringing a lawsuit against the bank that washed money for terrorists. The right to be able to bring those types of cases only came after Congress said, you know what? We’re kind of pushing this a little far. Yes, we have this relationship with Saudi Arabia. They have money invested in the United States. We get petroleum, fossil fuel products from the, but we’re going to have to start taking a real look, when we know that Saudi Arabia financed the money that killed 3,000 Americans in this country, and the families have brought lawsuits. They should be able to make a claim to that money. That’s what Congress did. Congress said yeah.

Peter Mougey: Because you don’t get special protections because you’re from Saudi Arabia, your diplomatic immunity, but quite frankly, it shouldn’t matter where you’re from. At the end of the day, we have to protect basic human rights. It doesn’t matter who it is.

Mike Papantonio: We’re analyzing this as a legal show. The only way it’s going to take place in little …

Peter Mougey: Just one step, one little step a time like a sandbar’s built.

Mike Papantonio: Exactly. So the UK said our first little step is to say, you know, we’re not granting unlimited immunity in a residential, limited residential situation, and we’re also factoring in that this is nothing short of slavery. We’re cutting some things out. They looked at the fact that in the UK, there were 17,000 domestic workers. These complaints are coming up regularly where it comes to these folks working for Saudi families. This wasn’t just a unique, one-off kind of case. This Filipino woman in the UK, this wasn’t one-off. The same way in the United States.

Mike Papantonio: This is not a unique situation, and we need to start considering …

Mike Papantonio: If you can’t embrace the entire thing, you start with exceptions.

Mike Papantonio: You start saying, well there’s some very suspect classifications that we need to look at as we monitor this. One is, suspect classification was slavery. Can we characterize, was slavery involved? The other suspect classification, that Congress already gave us, is was terrorism involved? Can we characterize the conduct as terrorism. We need to keep chipping away at this type of immunity because it is a disaster. Look these folks think that they’re just above the law. Can you imagine telling this woman that she’s a whore, she’s colored, garbage, and she’s held in this home, right there in Falls Church, Virginia.

Mike Papantonio: Where she can’t even leave the house.