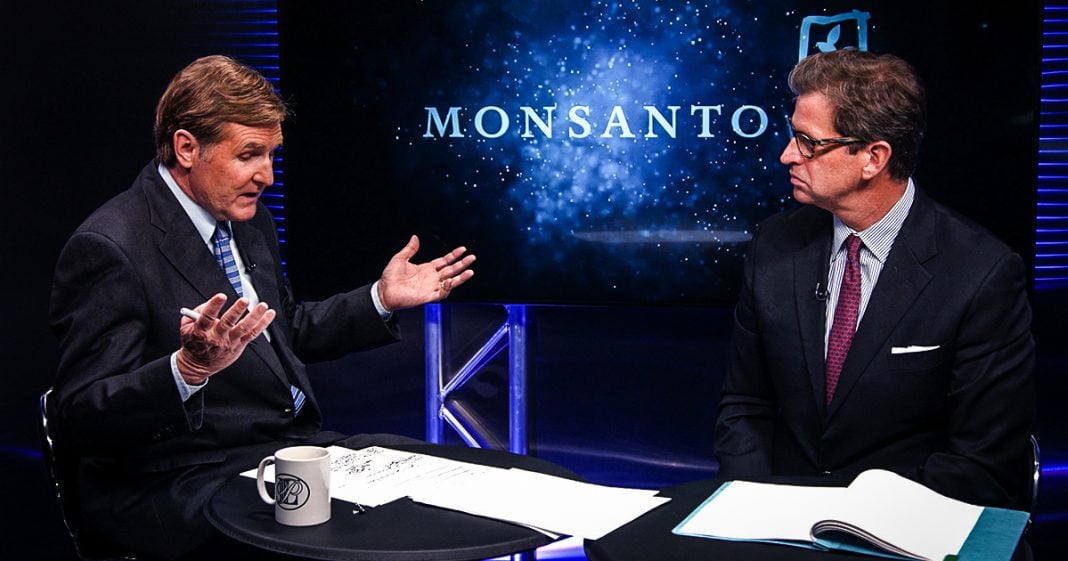 A federal judge last week ruled that Monsanto doesn’t have to put a warning label on Roundup to let customers know that the chemicals can cause cancer. This is a big win for Monsanto, but it represents a massive threat to American consumers. Ring of Fire’s Mike Papantonio and Peter Mougey discusses this.

Mike Papantonio: Like ruled that Monsanto doesn’t have to put a warning label on Round Up to let customers know that the damn chemical will kill them. It will cause cancer, it will cause all kinds of diseases. This is a big win for Monsanto, and it represents a massive threat to American consumers.

Mike Papantonio: I know the inside of this. The WHO came out and said, now this is a totally independent organization, made up, I think they had 17 of the best epidemiologists and toxicologists in the world look at all of Monsanto’s stuff and say, yeah. This stuff probably causes cancer. Now when that happened, you had Monsanto bring in all of their political muscle. They brought in senators, they brought in congressmen, they brought in the White House, they brought in everybody to push back. Especially the EPA and the FDA and the USDA. They were able to capture those organizations.

Mike Papantonio: Pressure. And push back on the WHO, the World Health Organization, saying that this stuff will cause cancer. Now along comes another thing, another study, it’s no different. They called it a long term study and we looked at farmers. There are 800 studies out here. 800 studies, that are all a mixed bag of one says it’ll cause cancer, another one says it’ll cause cell, it’ll actually destroy cells in the human body and actually alter DNA. They have all kinds of material out there.

But this judge takes it on himself to say, “Oh gee.” This one study, I’m going to say that California, who did the right thing, they had a proposition 65, they said we need to be able to warn people about this stuff causing cancer. And this guy says, “Nah. There’s no need to warn.”

Peter Mougey: That to me is what’s scariest about this.

Mike Papantonio: Because of this study. It’s terrifying.

Peter Mougey: Is that now a federal judge is going to override a state agency, who’s interest is protecting consumers. And thank the Lord for California, because they’re usually out in front on these types of issues about disclosure, protecting the consumers. And a federal judge is going to say, “You know what? I know more than you do, state agency.”

Peter Mougey: “All the scientists, all the study you’ve done. I’ll tell you what, while I’m sitting up on the bench, I’m going to go ahead and override the warning.” I mean, if a state agency says I want to warn my residents about a carcinogen?

Mike Papantonio: Yeah. Here’s what the judge absolutely had to just drive a bulldozer, and just absolute decimate this concept. In medicine and the law, there’s something called precautionary measure. And that is you don’t want until you have 100% where everybody in the world says, “Yeah, Monsanto’s Round Up will cause cancer.” I got to tell you something, it will cause cancer. It will cause cancer. And the study, this last study that came out, that says it doesn’t, we haven’t even started to look, who do they have, doing the report?

This is a company that has a history of study after study where we find out.

Mike Papantonio: That they actually pay the scientists to write the study. The study is made up, it’s just a fake study. We haven’t even had a chance to look at this one, and this judge is ruling before there’s been any discovery to find out how fraudulent the study probably is. But I’ll be taking depositions, I’ll tell you. By the time it’s over, we’re going to know the company had people involved, pushing the politics of the study.

Mike Papantonio: There’s probably going to be some clinical data that doesn’t all add up. And then we’re going to be back to square one. The World Health Organization-

Peter Mougey: Yeah, there you go. I love Monsanto’s argument, just how ridiculous it is. Mike, we hear this every day. Monsanto argued the cancer warning would damage Round Up’s reputation. Really? So we’re going to put a, we’re going to weight this out, cancer causing carcinogen, warn our consumers, versus worrying about Monsanto and Round Up and their business reputation? The business reputation wins out? I’d like to know.

Mike Papantonio: This stuff has become so ubiquitous. Round Up, glyphosate has become, and all the components, it’s not just glyphosate, it’s all the other bad stuff.

Peter Mougey: What is glyphosate? What is that?

Mike Papantonio: It’s just their, it is Monsanto’s form of a pesticide, that’s all it is. It’s chemically, its not pure, it’s got all type of other components that are just. But here’s the point. So now we have a company that has put out so much of the stuff that we find it in our wheat, in our bread, in our cereal, in our drinking water. And so they kind of have-

Peter Mougey: Why do the spray it from planes?

Mike Papantonio: They spray it from planes.

Peter Mougey: I mean, it’s every, I mean how could it not be?

Mike Papantonio: Okay. You know the real ugly part of this story? We’ve got a couple minutes. This is so worth saying. Doesn’t this sound like this is something that’s driven by Republicans?

Mike Papantonio: It’s not. It’s driven in part by Republicans. But it’s also driven just as much by Democrats. The Hillary Clinton story ties right into this. Hillary Clinton was the spokes … And Obama, was the spokesperson for GMO and Monsanto. Here’s the point about GMO. The reason they wanted GMO out there was because the GMO seed, you had to use Round Up on that seed.

Mike Papantonio: Exactly. So the farmer had to buy the seed, and they had to pay for the seed every year, otherwise they were called seed pirates and they were prosecuted by Monsanto. So in order to have the seed in the ground, they then had to have the Round Up. And so the two together made this company-

Mike Papantonio: Billions of dollars. And look at where the money went. Take some time sometime, look at where the political donations went on this. The biggest voice for this company were the Clintons. And they understood the same problem in the rest of the world, you can’t even sell this in places around the world, they won’t even permit it around the world. But we can in the United States because of the political conduct.

Peter Mougey: Let me ask you something, where’s Monsanto based out of?

Peter Mougey: That’s what I thought. So I mean, when you got, at the end of the day, when you see these heartland, it doesn’t matter, Republican, Democrat.

Peter Mougey: These huge conglomerates that are based out of and drive the farming side. It quite frankly just permeates everything we put on our table every night. At the end of the day, everything we eat.

Mike Papantonio: It is the most ubiquitous thing.

Mike Papantonio: This stuff is in granola bars.

Mike Papantonio: It’s actually in granola bars. But the point is this, they have so much political clout, that they’re able to buy scientists, they’re able to buy agencies like the EPA, they have totally bought the EPA. And so this is a story that’s going to continue unfortunately, and people are continuing dying from this product.