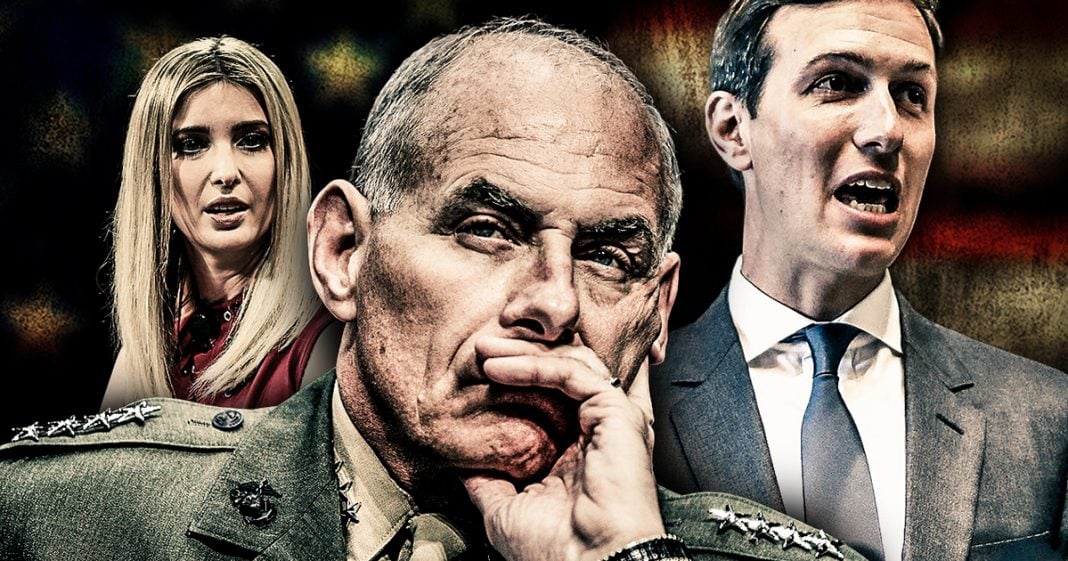 In a scene straight out of the cult classic Office Space, Trump’s Chief of Staff John Kelly reportedly wants to know exactly what Jared Kushner and Ivanka Trump do all day while they are at work. White House insiders say that Kelly is growing increasingly frustrated at the couple, and so far no one has even been able to answer his question about what the couple actually does in the White House. Ring of Fire’s Farron Cousins discusses this.

The Associated Press reported earlier this week that John Kelly, Donald Trump’s Chief of Staff is mad as hell at Jared Kushner and Ivanka Trump, and in a scene straight out of Office Space is wondering to aides what in the hell Ivanka and Jared do all day at the White House.

I’m sure for those of you who have seen the movie, Office Space, you’re aware of what I’m talking about, where you have the Bobs asking: “What would you say it is you do here?” That’s pretty much what John Kelly is doing at this point with Jared Kushner and Ivanka Trump and this is part of the tension that’s been growing between Kelly and Ivanka and Jared for about a week and a half now.

As we know last week, reports said that Donald Trump was reaching out to John Kelly to find a way to push Ivanka and Jared out so Donald Trump didn’t have to get his hands dirty by firing his own daughter and her husband. So I guess John Kelly has now stepped in and part of the “How do I push them out?” conversation involves around finding out what in the hell they actually do because I agree with John Kelly on this. Why are they there? What are they doing every day other than, based on the investigations, trying to use their foreign contacts and their positions of power to make money for themselves, which is obviously highly illegal of them.

But so far, that’s really the only information that we have about what these two people are doing inside the White House. They’re not qualified for the positions that they hold. They’re certainly not ethical enough to work within the White House and to be perfectly honest, neither of them are smart enough to be working inside the White House. John Kelly, for all his flaws and for all his horrible beliefs, actually does understand that. He wants to get back to his original mission of being the grownup inside the Trump Administration and so his first order of business is to get rid of the nepotism that has played this Administration since Day 1.

Donald Trump promised us it was only going to be the best people, and instead, he pretty much picked the worst possible people that he could find throughout this entire country, and to be honest, he didn’t even have to look far because some of the worst people in this country happen to also be his family members. At least John Kelly is trying to do away with that.