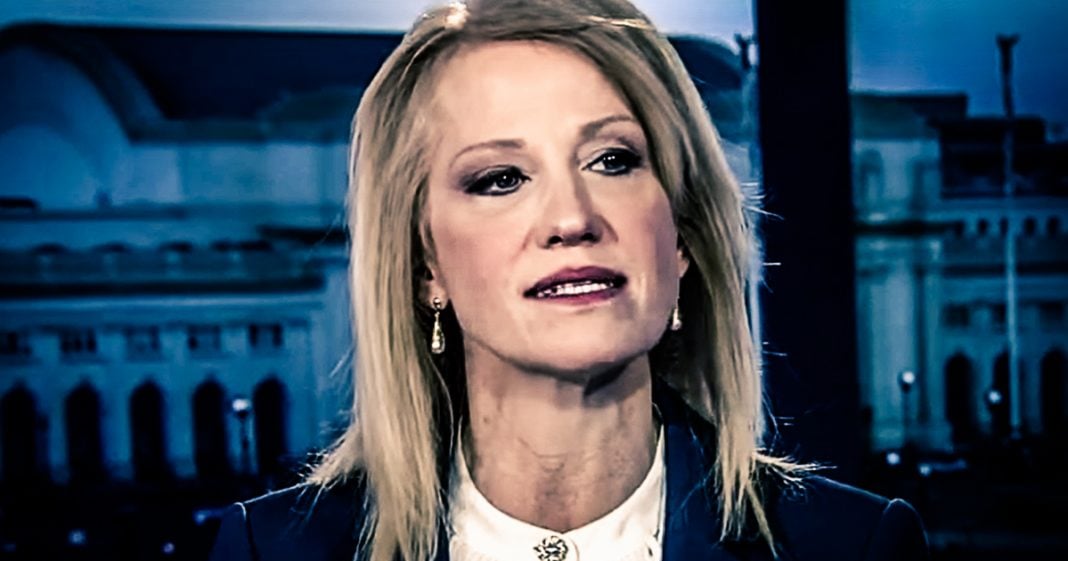 Kellyanne Conway said during an interview this week that she has already spoken to Donald Trump about her violations of The Hatch Act, and that’s all she’s going to say about the matter. It is painfully obvious that Conway will not be punished in any way for breaking the law, but that is what most of us expected from this matter. Ring of Fire’s Farron Cousins discusses this.

In an interview earlier this week, Kellyanne Conway told reporters that she had actually talked to Donald Trump about her two Hatch Act violations that were handed down by the Office of the Special Counsel earlier this week. According to Kellyanne Conway, she had that conversation with the president. They discussed it, and that’s all she’s going to say about what happened at the White House.

This means that Donald Trump, who is in charge of punishing her, according to the Office of Special Counsel, for breaking the law at least twice is going to do absolutely nothing about the fact that Kellyanne Conway, White House counselor, is a criminal. He’s not going to punish her. She’s not going to be reprimanded. Maybe he got mad at her, but that was basically the extent of this particular issue. Again, this is a federal law that Kellyanne Conway broke twice on recent occasions, according to Office of Special Counsel, and one time prior to that when she told people to go out and buy Ivanka’s stuff, so at least three federal law violations by Kellyanne Conway in the last 13 months and zero punishment for her.

Now this was completely predictable. I don’t think anybody actually expected Donald Trump to do something about Kellyanne Conway, but what it’s going to do is present a problem for Republicans as they go towards the mid-terms this year, when they can point to the fact that the White House is seemingly letting a criminal go out there and speak on behalf of the White House. The president happens to be a Republican, as does Kellyanne Conway, and that is going to present a lot of problems for Republicans trying to run for office this year.

When the White House refuses to take action against a criminal amongst their ranks, that tends to end up pretty bad for the entire party. Don’t believe me? Look back at the 2006 mid-term elections when the Democrats took back over Congress and actually managed to recapture the Senate in a move that nobody thought would actually end up happening. What was going on around that time? Well, Karl Rove was being investigated, even though he wasn’t part of the group running for Congress, and there was a lot of other corruption and scandal happening within the White House that tainted Republicans further down the ballot, even though the president wasn’t even on it.

The same scenario is playing itself out today. Donald Trump refusing to act on Kellyanne Conway, which, to be honest, he really can’t anyway because that’s one of his last confidantes in the White House, is going to have horrible repercussions for the rest of the Republican Party as we head towards this year’s mid-term elections.