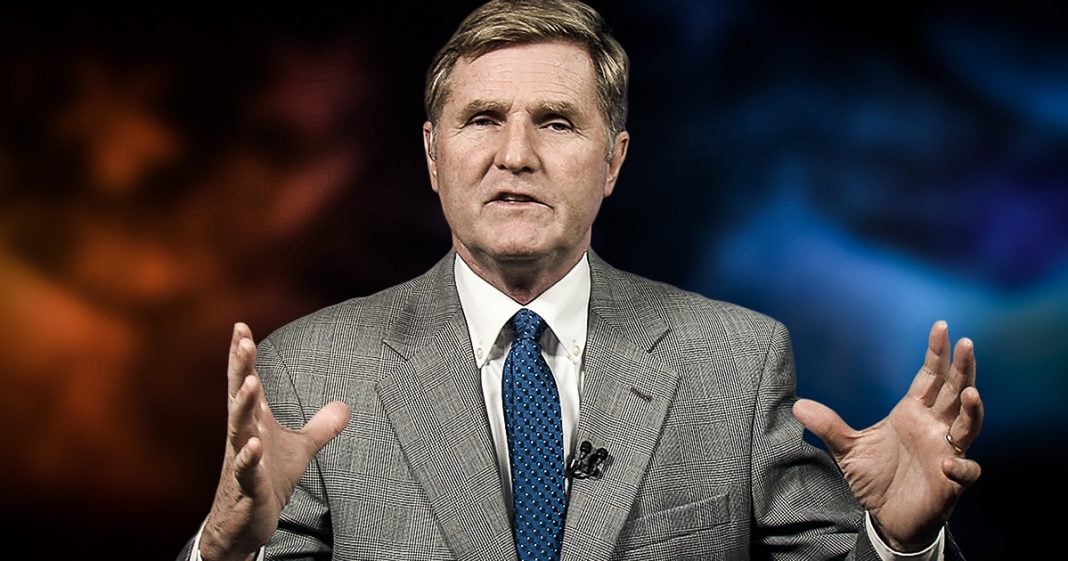 Thom Hartmann:
I understand that you have been keeping an eye on what Mick Mulvaney is up to over there trying to fenestrate the Consumer Financial Protection Bureau and elevate the payday loan industry to a godlike status?

Mike Papantonio:
Yeah. Well, there’s no surprises here. When he was appointed by Trump as the interim person to do all that, we all knew it was all but … It was a disaster and we saw it coming from the top. We’ve all seen the commercials, Tom, the smiling person walking out of the payday lending office telling us how happy they are that they have $500 in their hand with no credit check.

But what we don’t see and what it’s not telling you is real world reality, and that is that $500 in cash comes with a weekly percentage rate that’s frequently over 500%, meaning it could take them years before they ever pay off that small loan. There’s been a scream for regulations. Mulvaney has done nothing about it.

Now we can see one of those sleazy CEOs running the actual agency that’s supposed to be protecting us from predatory lenders. Janet Matricciani is the name that’s currently being floated to replace Mick Mulvaney as the head of the CFPB, and this is a woman who ran World Acceptance, which by the way was one of the biggest payday lending companies in America, that was actually being sued, by the way, by the CFPB up until a few months ago when Mulvaney dropped the suit against her company that was very clear it was criminal. It wasn’t just … It was criminal conduct.

Thom Hartmann:
Like putting a bank robber in charge of bank oversight?

Mike Papantonio:
That’s exactly … She’s the new bank robber. Mulvaney gave her cover until she got there by dropping the lawsuit. But we all know these stories. Everybody knows these stories. For several years we’ve heard these horror stories about payday lenders. They’re out there.

I think one case, Tom, that’s … I think it was a 71-year-old, he borrowed about $250 from an Austin, Texas franchise of I think it was Cash Plus after losing her job as receptionist. Then about four months later she owed almost $1,000 and faced the possibility of jail time if she didn’t pay up. These stories are endless. I could go on forever.

Elliott Clark, I remember this was a case from Kansas. I think he took out about a $2,000 loan from payday lenders to pay off medical bills. The guy had absolutely necessary medical treatment. Clark ended up owing more than $50,000, Tom, just in interest charges to the lending company, even though he was actually making required minimum payments every month.

So yeah, now we have somebody in charge, she’s awful, she comes from the biggest payday lending in the business. She’s gotten protection from Mulvaney by having her lawsuit already dismissed. She’s just another payday lending thug, and that’s who Trump has put up. So we know the rest of the story, don’t we?

Thom Hartmann:
Yeah. The payday lending industry is by its very nature a predatory industry and they’re allowed to charge … We used to have usury laws. Richard Nixon pulled on the plug on them, and arguably he had to because the inflation had gotten so bad after the Arab oil boycott. But it used to be illegal in the United States for not only any bank, anybody to charge more than 10% interest, and that’s what Nixon blew up in ’71 as I recall, or maybe it was ’69 or ’70, but whatever they year was.

Now you’ve got these payday lending companies where people are paying an effective interest rate in some cases of 300 or 400 or 500%. Do you have that right.

Mike Papantonio:
No. No. There’s … Yeah. That’s your conservative numbers, Tom. Look, there are stories of borrowers who saw their interest rates hiked up to well over 900% after the first week of their loan, putting them in a cycle that’s an endless interest payment. They don’t really pay anything off. They don’t pay any principal. They pay interest and they pay what they call handling charges.

Every month you have this person who believes they’re actually paying down the principal of the loan. They’re not. They’re paying interest and they’re paying what we call administrative handling that somehow takes it outside of the usury law. That’s the exception here.

So this is how the payday lending industry works. They set up a shop in very poor areas around the country, near military bases. They advertise their services as a quick and easy way to get some cash, and then once they have the consumer with this document in front of them … Have some fun sometimes. Get the payday lending document and you tell me if you can find in there how you really do pay down the principal without a huge payment.

Thom Hartmann:
So people are signing incomprehensible … Signing contracts that even a lawyer would have a hard time understanding?

Mike Papantonio:
Actually there’s a couple of stories where lawyers did take a look at it and they couldn’t figure out how much they had to pay on a $200 loan. So the idea of expecting that somebody is just going to understand that is absurd. This is a criminal process. You remember that … I think his name was Scott Turner, the race car driver who had the business similar to this, he ended up going to prison. I think he went to prison 17 years or something like that. Every one of these people are a target for the Feds, but we’re not going to see it in this administration.

Thom Hartmann:
Yeah, not under Mulvaney and not under any other Trump toady. Now Bernie Sanders … One of the things that he campaigned on and that I believe the Democratic party actually put in their platform … I could be wrong on that, but it was certainly something that Bernie kept bringing up … Back in the ’80s, when Louise and I lived in Germany, that year that we lived in Germany, if I needed to cash a check quickly, or any other small financial transaction, wire some money or whatever, I could go to the Post Office and do it.

Mike Papantonio:
It’s a simple, brilliant idea that has been on the table for a long time. Here’s the ugly thing about it, Tom. It’s not just the Republicans that are fighting this. It’s Democrats. 13 Democrats, for example got behind this idea of making this a legal process. Now we want to say that that never happens, but it happens all the time. They stand behind payday lending all the time because payday lending spreads out so much money. It’s not just Republicans. I know that’s hard for Progressives to say, but that is the reality.

The industry itself right now, because of the failure for Congress to take any action, they’re siphoning off about $3 billion a year out of the poorest communities in American. While this seems like a perfect industry for government to step in and to regulate, the truth is that both government and the court system are doing everything in their power to protect the industry.

Courts are making payday lenders file … They’re turning them into criminals. They’re actually throwing them into jail when they don’t pay these loans off.

Mike Papantonio:
Payday borrowers. Excuse me. Yeah. So this is not something … There’s nobody that’s going to pull the sword out of the stone here except a Bernie Sanders type. We’re not going to see it from our Wall Street Democrats, and we’re certainly not going to see it from the thuggish Republicans who just are joined at the hip with this kind of business. This is acceptable business to them.

So in order to change it, it’s going to take something dramatic. I don’t see it changing anytime soon to tell you the truth based on the conducts of Democrats we’ve seen already.