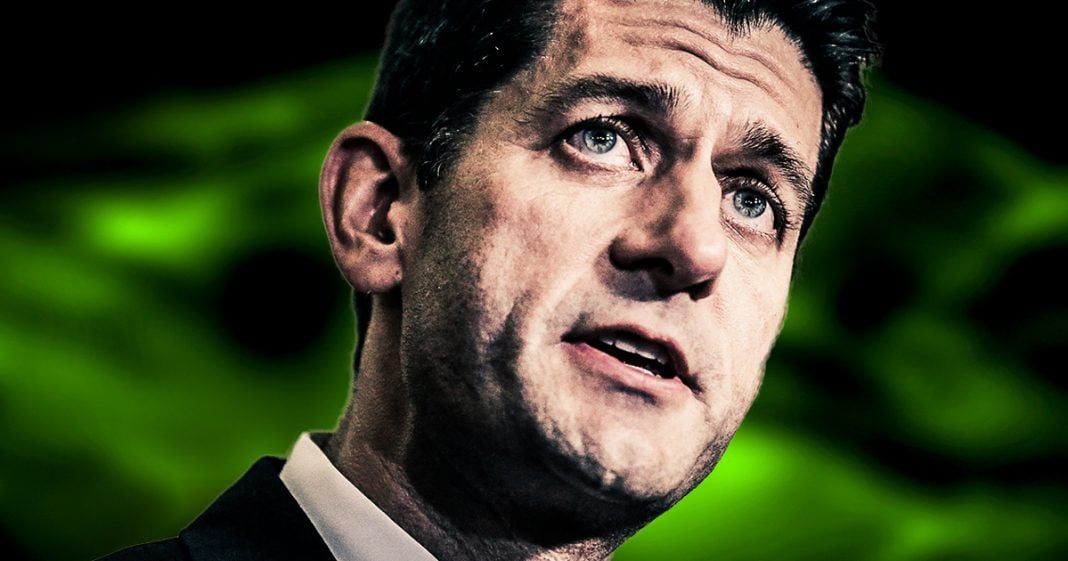 During an interview with CNN this week, Paul Ryan admitted that he isn’t very concerned about the potential illegality of Trump’s $130,000 payoff to adult film star Stormy Daniels and that the issue isn’t even on his radar. This story is much more than just a sex scandal, as the payoff was likely a clear violation of FEC rules and has the potential to end the Trump presidency. Ring of Fire’s Farron Cousins discusses this.

During an interview this week on CNN, Paul Ryan said that he doesn’t spend a lot of time thinking about Donald Trump’s affair with adult film actress Stormy Daniels. When pressed by the CNN host, Paul Ryan said that it’s really not an issue that’s on his radar. He doesn’t think about it. He’s not very concerned with it, and he was being specifically asked about the $130,000 payment that, as each day passes, becomes more and more likely that Donald Trump himself knew that it was happening. Basically, this is about campaign finance violations more than it is about an extramarital affair with an adult film star. That’s what we’re talking about here and that’s what Paul Ryan doesn’t seem to particularly care about. He doesn’t care if the president of the United States violated FEC laws by approving or being a part of a $100,000 payment to his mistress to keep her quiet. Paul Ryan just wants to go out there and talk about tax cuts and how great everybody in this country is doing since we cut taxes which isn’t actually true.

But nonetheless, Paul Ryan, as basically the second in line to be president if Donald Trump gets impeached and if Mike Pence gets impeached with him, then we do have President Paul Ryan, doesn’t particularly care that the president may have broken the law in this particular situation. Maybe it’s because he understands he is second in line to take that job if something happens to him because I have to say it’s seeming more and more likely at this point that Donald Trump’s presidency is going to be ended over his affair with a porn star. That’s a long shot but I think it’s getting more and more likely by the day. The more information that comes out about this story, the more it’s pointing towards Donald Trump directly being involved with this payment which again is a violation of the in kind contributions to a federal political campaign and, therefore, would be a violation of FEC guidelines and laws.

But Paul Ryan doesn’t care about it for another reason, not just because maybe he’s got political ambitions that involve Trump and Pence getting impeached. He doesn’t care about it because he knows this probably isn’t going to play well in this year’s midterm elections. He understands that the more he goes out there and talks about it or god forbid he even says that it’s a bad thing, it’s going to piss off Donald Trump. Then Paul Ryan is not going to get that Trump endorsement. He’s going to have Republicans mad at him as he goes back and tries to campaign against Randy Bryce in Wisconsin this year. Not going to work out too well for Paul Ryan.

He would rather sit on his hands, say nothing about it and just let Donald Trump get away with, one, being a serial philanderer who’s horrible to his own wife and, two, potentially being a criminal that violated the FEC law. In the eyes of Paul Ryan, whatever is bad for the party doesn’t matter as long as he personally isn’t involved and he can save his own skin at the end of the day. Real stand up guy there, Paul Ryan.