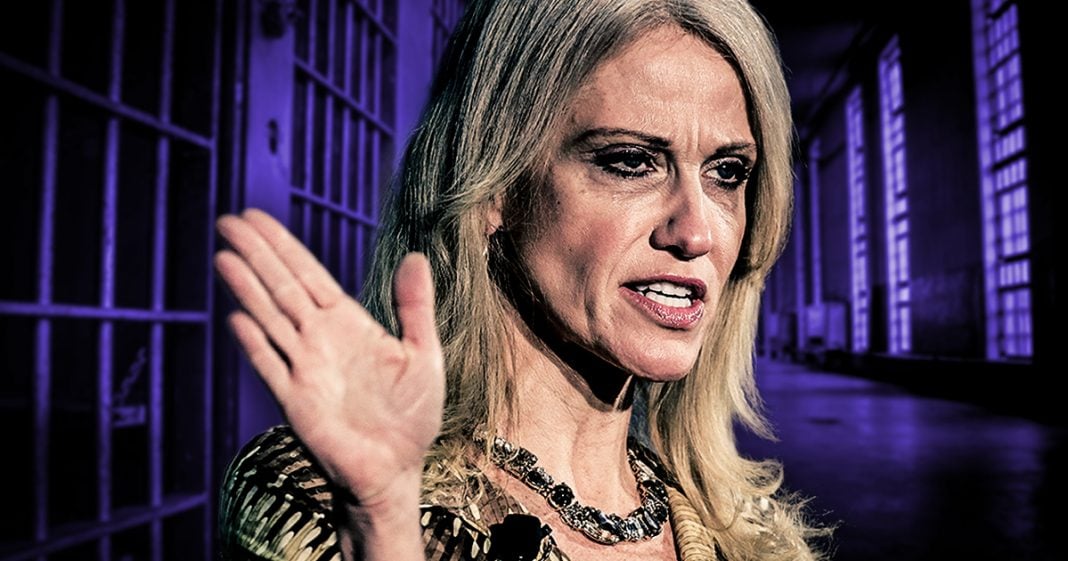 With White House counselor Kellyanne Conway being slapped with two Hatch Act violations, on top of all of the other lawsuits and investigations, the White House has officially become a criminal enterprise. Once you understand that, it becomes pretty obvious why so many staffers seem to be abandoning the administration, as Ring of Fire’s Farron Cousins explains.

The White House, obviously, they are the ones who get to decide what to do with Kellyanne Conway, how to punish her after her third strike. They issued a statement that basically said, yeah, we don’t care. Specifically, the statement said that by violating the Hatch Act, Kellyanne Conway was actually showing how much he tries to adhere to the Hatch Act. Their defense of her crimes was saying that, yeah, she broke the law, but by breaking the law, she showed how much she doesn’t want to break the law.

Now and any other administration, that would pretty much seem like one of the dumbest things you could say, but that’s exactly what we’ve come to expect from the Donald Trump White House. A circular sentence that basically makes absolutely no sense, but it’s what they’re going with. That’s the statement that they issued, and so they’re going to do nothing about the fact that Kellyanne Conway has broken the law three times in the last 12 1/2 months. Again, that was totally predictable.

This White House has completely become a criminal enterprise. Kellyanne Conway has broken the law three times since last February and has yet to be punished for it. I mean, we’ve got Jared and Ivanka under investigation by the IRS and the FBI respectively, completely separate from the Robert Mueller special prosecutor investigation. This is a criminal White House. These people long in prison, not serving with the White House. You have conservatives out there, the Fox News followers on social media tweeting out these stupid things like, “Yeah, Kellyanne Conway violated the Hatch Act, but so did Obama.” Completely showing their ignorance of the law, because the president is actually exempt from it.

They also tried to attacked Hillary Clinton as allegedly breaking it, and John Kerry as allegedly breaking it, although those things never happen. But that’s what happening with the conservative base right now. They say, “Yeah, they did it, but what about them too. You got to get them to.” That’s not how it works. First of all, there’s no evidence to suggest that those people violated the Hatch Act. Second of all, they’re not even in power anymore, and if you’re not going to punish your people, then why would you Worry about punishing someone else? They’re not worried about it.

They just want to deflect away from the fact, and draw the public’s attention away from the fact that we basically have a gaggle of criminals, an organized federal political mob, running this country today. It all flows from the top. It all flows from Donald Trump. I mean, this is a guy who is currently being sued I guess, by at least 19 different women for sexual misconduct, and he’s the President of the United States. He’s under investigation for possible collusion with foreign superpowers to help win the election. He’s under investigation by that same special prosecutor for some of his financial dealings around the globe, and some shady investments and loans that he’s received. Jared Kushner, same thing.