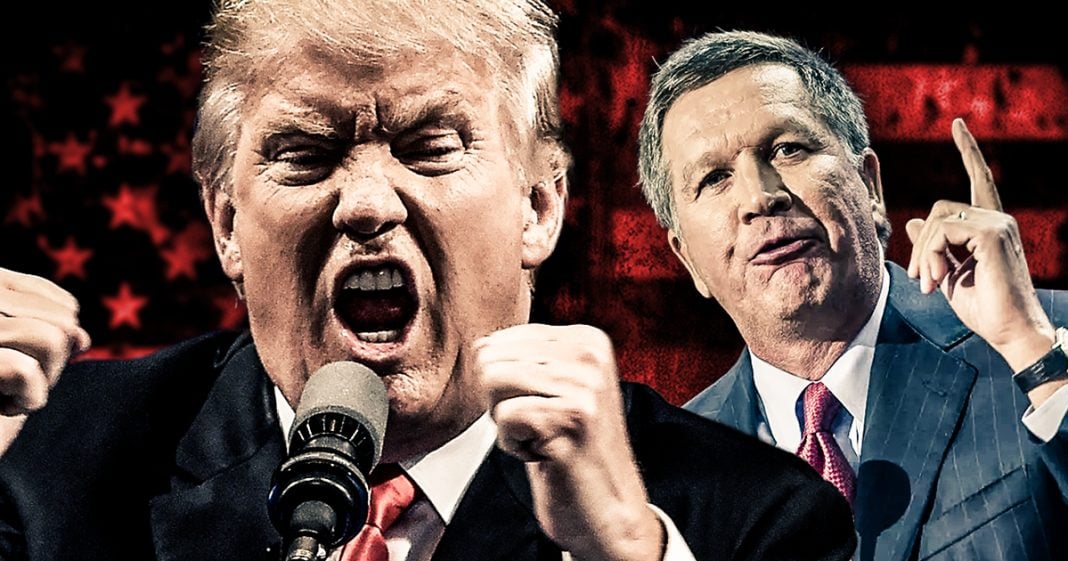 Recently, speculation about possible Trump challengers in 2020 began, and names like John Kasich and Jeff Flake continue to be floated as possible primary challengers to the sitting President. But it won’t matter if someone challenges Trump – he is just the symptom, not the cause of the lingering problems in the Republican Party, and his base won’t jump ship on him. Ring of Fire’s Farron Cousins explains.

In the last few weeks, a lot of pieces have come out saying that John Kasich may run against Donald Trump in the 2020 Republican Primary or that maybe he’s going to come out and run as an Independent against Donald Trump and whatever Democratic challenger is out there. This week there was a piece on RawStory talking about the fact that Jeff Flake may actually end up primarying Donald Trump in 2020. The evidence that they show is that Jeff Flake from Arizona is actually traveling to New Hampshire in the coming days to get a feel for things, so it seems likely, and very possible, that somebody like Jeff Flake or John Kasich could break precedent and actually challenge a sitting President to a presidential primary, as we head towards 2020.

I hope that happens, but it’s not going to make any difference, even if it does. Here’s the thing that Republicans — Republican politicians, I should say — don’t understand. Donald Trump is not the problem. Donald Trump is the symptom of your Party. The problem is your all right base. The problem is that, for decades, your Party has been sowing the seeds of racism throughout your Party, sexism, hatred of all non-white, English-speaking people, and now the chickens have come home to roost. That’s why you ended up with a guy like Donald Trump.

When we look, in terms of policy, Republican policy, Donald Trump has not done anything different from what any other Republican would have done. When you go back and look at all of those Republicans that were on the stage during those 2015 Primary Debates for the Republicans, not a single one of them would’ve done anything differently than what Donald Trump has done today. That tax cut package … That still would’ve passed. Lack of action on gun control … We’d be in the same boat. The Muslim ban, yeah, probably still would’ve happened. Maybe Rand Paul wouldn’t have done that, but who knows? The rest of them on that stage, 100%, they were all for it. They want to ban women from being able to have access to abortions. They want to defund Planned Parenthood as a further assault on women.

This is a Republican problem, not a Trump problem. The only difference is that every other Republican tries to kind of scale it back and a look a little professional from time to time, while Donald Trump doesn’t care, and he’ll just say whatever stupid thing pops into his head. He doesn’t have a filter. That is the only thing that separates him from the rest of the Republican Party.

When I say that having somebody like Flake or Kasich primary Donald Trump, that it’s not going to make a difference, it won’t. First of all, because they’re not going to win, because they don’t understand that the base is the problem, and the base loves Donald Trump, the general public not so much. Democrats and Independents, not big fans of him, and they’re also not big fans of his policies, but keep in mind that those policies will not change under a different Republican President, because Trump has done everything that any other Republican would already do.

Flake is no different. Kasich is no different. Ted Cruz, Marco Rubio … They’re all the same. The only difference is they have a better filter when it comes to stopping themselves from saying the stupidest, most bullish things that pop into their head, unlike Donald Trump, and they think that his bully mentality is the only thing that people in this country don’t like. That is why it doesn’t matter who wins the Republican nomination. It’s going to be Trump, because none of those other people stand a chance, because they don’t understand what’s happened to their own party.