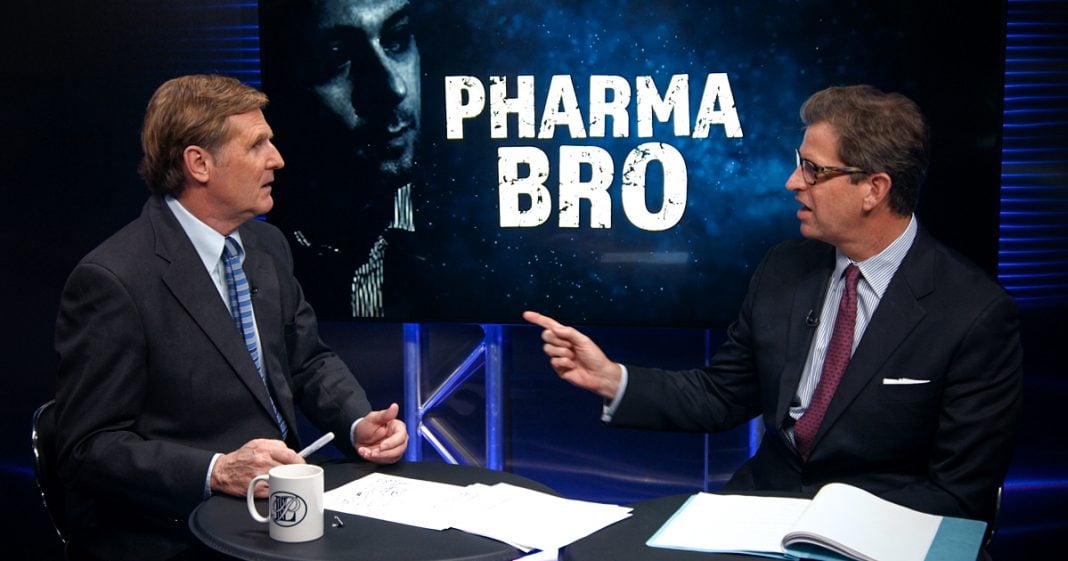 A federal judge ruled that Martin Shkreli, who raised the aids drug Daraprim by 5,000%, conviction stands and his sentence is not going to be reduced for all the fraud that he committed. Attorneys Mike Papantonio and Peter Mougey discuss this.

Mike Papantonio: Earlier this week, a federal judge ruled that Martin Shkreli conviction stands and his sentence is not going to be reduced for all the fraud that he committed. This Pharma bro. As I look at the facts of this case, they’re saying, Peter … Of course, you’ve handled many cases involving Ponzi schemes that you’ve handled in civil court. I have no love lost for this guy. He’s awful. He’s the worst of the worst. I mean, just to put it in perspective, this is the guy that raised the aids drug Daraprim by 5,000%. Now, this was a life saving, necessary drug. He knew what he was doing. I mean, 5,000%. As a matter of fact, there were many people that went months and months without taking the drug and they had relapses. So I can’t imagine the suffer and the death of this guy’s cause.

I’m looking at this case and I’m trying to see what is the fraud that he committed?

Peter Mougey: The status of this case is they’re trying to decide what his restitution is, how much he owes back to the government and how much time is he going to serve. But what’s kind of novel about it was that he pilfered money from one company and put it in another, both under his control. So his defense lawyer’s argument and there’s a quote here that they actually didn’t lose money because the company that he took money from and paid it to the other, the profits were high. Now that’s not a novel argument. So what they’re saying now is we made you 20%. Now you’ve only taken 15 points out of the 20 and transferred it to another company. So you still made five, right? So no one’s hurt. You still made money.

Peter Mougey: But if that was the rule, you could steal with impunity up to the profit level down to zero and say, “Well, I mean …” You don’t have any losses.

Mike Papantonio: In other words ….

Mike Papantonio: No, you arbitrarily make a decision on how much one shareholders going to make compared to what the other one makes. Not on the power of how the product is doing, but on your subjective opinion about this shareholder should make this and this shareholder … I thought it was interesting. They’re going after his Wu Tang Chan leather bound album that he has and he’s also got that Lil Wayne.

Peter Mougey: That should be worth the whole restitution right there. Unreleased Lil Wayne album.

Mike Papantonio: He has an unreleased album by Lil Wayne that they’re going after, and he has a copy of the Wu Tang Clan’s, their leather bound album Once Upon A Time In Shaolin.

Peter Mougey: Yeah. That was to help to pay his $10 million bill. $7.3 million in cash and assets and includes a Picasso painting. But they’re saying, “We really shouldn’t have to pay anything because we only stole your profits. As long as we only steal your profits, it’s all right.”

Mike Papantonio: This guys the worst of the bottom feeders. I mean, you talk about real bottom feeder, he is one. He can face 20 years in prison if he’s convicted by a jury. But I think most interesting about this, when I read it, I thought about Valeant. Now, Valeant is a pharmaceutical company that nobody went to prison because this really big, big Wall Street insider, William Ackman was involved in the Valeant case. But let me tell you, the Valeant case was no different than this. Here’s what the company would do, Valeant would go in and buy a small company or a big company. They would buy the company according to what the need was of the pharmaceutical. In other words, there’s diseases where you don’t have tens of thousands of people that have the disease. You may have only a couple thousand people. So they would find companies like that, they would buy the company, and a pill they used to sell for $50, they would raise it to as much as $4,000.

Mike Papantonio: So that’s what Valeant did. Now, because of the people involved in Valeant because this is a Wall Street insider, Bill Ackman, nobodies gone to prison. They’ve jacked up prices on these absolute life support kind of medications. If you don’t have this stuff, you die. So Valeant went in and did the same thing that Pharma bro did. Pharma bro jacked his up 5,000%. There’s cases with Valeant as high as 10,000%, and not one of them went to prison. But why? Okay. First of all, Pharma bro is low hanging fruit.

Peter Mougey: But these are the kind of people they prosecute.

Peter Mougey: It is. I mean, it’s the lay ups. My 15 year old could prosecute this guy. You took money from one pot, you put it in another. But the more difficult cases …

Mike Papantonio: Is it even a matter of difficulty?

Mike Papantonio: The facts are the same.

Mike Papantonio: In so many ways.

Mike Papantonio: One is a political insider. We covered a story about …

Peter Mougey: A company versus small. This is a little, tiny … This is a small bit player. It’s not one of the big Wall Street firms.

Mike Papantonio: We covered a case maybe a couple of weeks ago where you had a mortgage company that was doing the same thing that they were doing up in Wall Street every day. The mortgage company would make up just fantasy facts about what the financial standing was of the person borrowing money, right? So in one, with a small company, the guy that didn’t really have all the Wall Street influence, they threw him in prison with Goldman Sachs and with Shearson Lehman, with all those folks. Nobodies been to jail. Jamie Diamond. What about … Jamie Diamond hasn’t been to prison.

Peter Mougey: At the end of the day, none of these guys have, and they just don’t go after the bigger fish. It all has to do a lot with that revolving door. Nobody wants to irritate the Goldman Sachs because they’re going to get a job there next week.