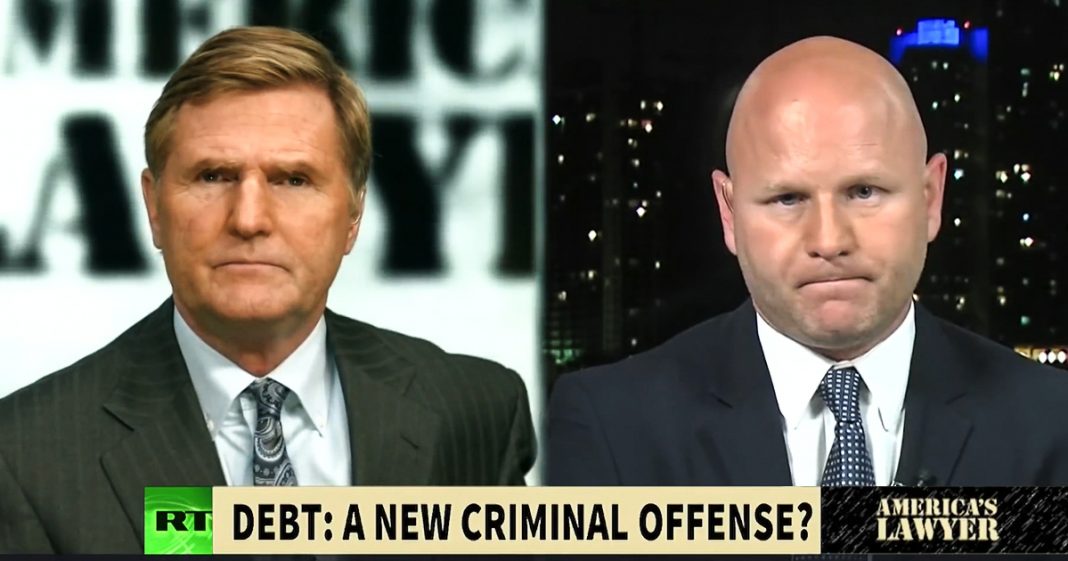 Via America’s Lawyer: Mike Papantonio and Farron Cousins discuss Judges are acting in favor of Debt collection agencies and putting people in jail for not paying their bills.

Mike Papantonio: Up until about the mid 1850s, debtor’s prisons were a common sight in the United States, and all across Europe. The basic concept allowed governments to take a debtor to court, and if the indebted person couldn’t pay, they were put into a work camp to pay off their debts. Once the debt was paid, the individual was allowed to go free.

These debtor’s prisons allowed for slightly more freedom than a typical prison, there were no armed guards and the prisoners were often allowed to leave to go to work their regular jobs during the day.

The practice was ended after it was decided that private debt shouldn’t land someone in a forced labor camp. And as bankruptcy were modernized, it became easier for people to stay out of these debtor’s prison, leading to their eventual demise.

Then things changed in the United States. Starting in the late 1970s, when more and more American citizens began going to prison over unpaid fines to either the courts of the state, and the term debtor’s prison was once again entered into the American lexicon. Owing money to the government is one thing, and what about private debt owed to corporations though? After all, private debt’s a civil matter, not a criminal matter. So it’d be almost impossible to be sent to prison for debt owed on medical bills, or credit cards, or student loans. There was a time when that would seem impossible, but those days are far behind us.

According to a recent report by the ACLU, more and more citizens are being thrown into prison by judges who say that private debt held by collections agencies is now a criminal offense. Which most legal experts agree is a clear violation of the Equal Protection Clauses of the 14th Amendment.

But as the corporate stranglehold on American life gets tighter, it’s becoming increasingly clear that corporations always get what they want. And right now, they want Americans put in jail if they aren’t paying their bills.

Joining me now to talk about this is Farron Cousins, editor of the Trial Lawyer Magazine.

Farron Cousins: Well what’s happening is that collections agencies here in the United States are trying to use the court system not just to force people to pay their bills, that’s one thing, but their big deal right now is they want to punish people. They want them to go to prison, so what they’re doing is they’re going to court, they’re saying, “Look, I have this person, they’re not responding to my letters, they owe a lot of money that I have bought the debt for from this company, lets bring them to court, and when they can’t pay, or more importantly, when they don’t show up to court because we didn’t tell them they have a court date, then you go ahead, judge, and slap an arrest out there for them.” And then the person gets arrested, they have no idea that they had a court date, they’re not able to leave until they pay their bail, which many of them, since they’re already in severe debt, aren’t able to do anyway, the city or state gets some free labor from this person being in prison. The corporation or the debtor agency gets a lien placed against this person, they take their home, their car, part of their paycheck, if they have a job, and the person’s life is essentially ruined, because it’s very hard to come back from being put in prison-

I’m wondering as I listen to this, has this been investigated? Because it’s not even legal, really, this is really, if you look at the face of this, this really wouldn’t be constitutionally legal for judges to issue arrest warrants in civil cases. If we find out that there’s some scheme behind this entire thing, what’s your take?

Mike Papantonio: Farron, let me just say this, if you listen to this program, and you know that this is going on somewhere in your community, I’d recommend you get in touch with us, we’ll get you to a lawyer in that community that can handle this. Look, this type of operation doesn’t work unless there is cooperation that usually is going to be illegal conduct. Debt collection agencies have been able to manipulate the court system to the point that people are now thrown in jail. That is unheard of. First of all, on its very face is unconstitutional, unless you have what you described, Farron, which is a failure for a person to meet a court appointed date or time. So you’re saying that’s where they’re really grabbing them. The person’s not showing up, so the judge then has a warrant for their arrest, they’re thrown in jail for that. Is that kind of how this whole scheme is put together?

Farron Cousins: Absolutely. And most of the time, the majority of people that they ACLU found who have gone to prison for these debts, they didn’t even know that they had a court date. Because what happens is that they do sometimes send them on this DA letterhead, but they’re in envelopes that come from the debt collection agency. And people who are in these massive debts, they tend to, unfortunately, overlook those. They don’t want to open them, or it’s buried in fine print. Or they didn’t get the email or voicemail that the company left, because sometimes oops, they forgot to just let them know altogether. They’re scamming these people, because they make money off it, the DA’s offices are making money off it, the city or state now gets a new prisoner to go out there and pick up garbage on the side of the highway, everybody wins, except for the person’s whose like is already on the rocks because they can’t afford to pay their bills, and now they’re just going to make it harder for them to get a job in the future-

Farron Cousins: Or rent an apartment, or buy a home.

Mike Papantonio: Farron, we know that our elected officials, because of Citizens United, you’ve got state and federal levels, are always beholden to corporate donors. You understand, judges run for office just like everybody else. And now it looks like the same is really true for the judiciary. Now this money is flowing into the judiciary, at any given time in your backyard, you’re going to have, every several years, a new judge running for office. It’s interesting to know where that money comes from. Don’t you think the ACLU’s kind of looking into that part of it? Isn’t that something they should look into?

Farron Cousins: Oh absolutely. The ACLU knows exactly what you and I know. We did a massive spread on it in the Trial Lawyer Magazine about two years ago, talking about the tens of millions of dollars that are flowing to judicial races all across the country. And it’s not for these massively powerful judgeships, it’s for the little ones. The little towns that most people have never heard of. You have people like the Koch brothers swooping in and funding these judges in quote, “non partisan races”, where the judges running for the bench don’t have to declare whether they’re a Republican or a Democrat. But they’re getting funded by massive corporations, by some of these big monied interests, and they’re doing it because that’s how they shape policy. You can’t always do it at the-

Mike Papantonio: So this is easy to follow. You have somebody that owes bills, the debt collection agency shows up in civil court, they usually don’t even give notice to the person that owes the bills, but that person doesn’t show up. The court then issues a warrant on grounds of a failure to show, something as basic as a failure to show. So when they don’t show, then the court has criminal authority to do something about that.

And so in order for this to work though, you have to have DA’s office working with you, you have to have judges who are either total buffoons that are just so stupid that they’re getting sucked into this, or they’re part of the problem. And then you have to have the person that owes the money, who simply isn’t all that diligent in what they’re looking at as far as their mail. If you add all that, you kind of have this scam working anywhere in American, don’t you?

Farron Cousins: Absolutely. There’s hundreds of areas across the country that the ACLU found, 26 states, possibly as many as 44 states, where this very scam is playing out. And once these debt collection agencies get you in court, whether you show up or not, that’s what then gives them the authority to garnish your wages, to take your paycheck away. And if you happen to be one of the unlucky people that gets thrown into prison because they didn’t tell you you had to come to court, as I said, that basically destroys somebody’s credit rating. It destroys their ability to get a job in the future. These are life changing, life altering events that these debt collection agencies know full well is happening to these people, they know they’re running this scam, that they’ve paid off the DA’s office-

Farron Cousins: That they may have helped buy some judges here and there. But they don’t care, because all they see is money.

Mike Papantonio: How can consumers protect themselves in these situations, Farron, what’s the best thing they can do?

Farron Cousins: Well, if you find yourself in this situation, make sure you open up any letter, even if it is from a debt collection agency. Call an attorney immediately, find someone that can help you through this. And if you have some debts that are out there outstanding, never throw away a bill, whether it’s from a hospital or something like that. And always try to make a small payment if you have, make a $5 payment, whatever you can do is going to keep that account active, and it will prevent that organization, that company, from selling it to a debt collection agency. Because that’s the difference, these aren’t the massive corporations, the hospitals taking people to court, it’s the debt collection agency. So avoid going in there by making a three or $5 payment, if you can, and it will prevent that company from selling off that debt if they see that there’s an active attempt to make a payment on that particular account.

Mike Papantonio: Farron Cousins, thank you for joining me, okay, lets stay on this story. It sounds like it’s just getting started.