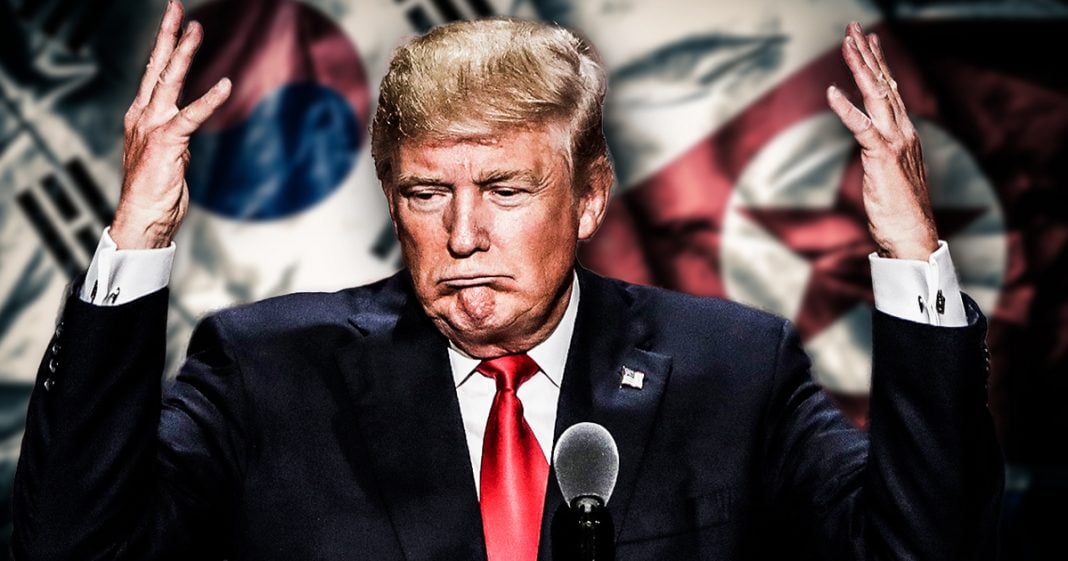 During Donald Trump’s fundraising speech in Florida recently, he told the crowd that he had recently spoken with North Korea about the possibility of talks, and that North Korea personally called him to initiate the talks. The only problem is that the call never happened – Donald Trump received a call from South Korean president Moon Jae-in. Should we really trust a president that doesn’t know who he is talking to? Ring of Fire’s Farron Cousins discusses this.

You know it’s important for the President of the United States to have a firm grasp on American foreign policy. To know your world leaders and which countries are your allies, and which ones could potentially be your enemies. That’s something that apparently Donald Trump doesn’t have. On Saturday evening, during his little fundraiser in Florida there, he told the crowd that he recently got a call from North Korea and they said, “We want to sit down and talk.” And Donald Trump said, “Well, so do I. But you have to de-nuke first.” I guess that’s what he’s calling getting rid of your nuclear weapons. You have to de-nuke first. But nonetheless, Donald Trump told that crowd that North Korea called him, and that he was absolutely ready to sit down, as was North Korea.

North Korea and South Korea recently announced that those two countries for the first time in more than a decade, would be sitting down for talks, possibly to work out some kind of deal and end the tensions between the two countries and the constant conflict. That’s what we need to happen. We don’t need an idiot like Donald Trump sitting there at that table making things worse. If these two countries are able to work it out and come to some kind of agreement and make things a little better over there for all the civilians caught in this ongoing catastrophe, that’s what we need. We don’t need a guy like Donald Trump over there who doesn’t even know the difference between North Korea and South Korea.