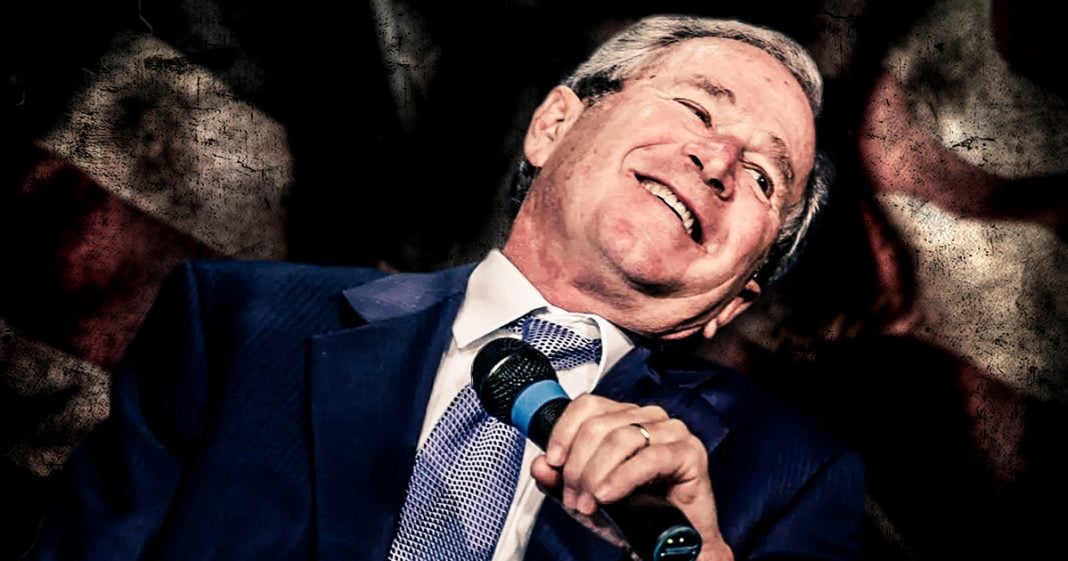 George W. Bush may not be a fan of Donald Trump’s presidency, but he is certainly a fan of the recent turnaround in his approval numbers, joking with friends that Trump is actually making him look good. The public has quickly forgotten all of the disastrous policies from W that helped crash our economy, started a war based on lies that has killed countless of people across the planet, and he and his administration committed egregious war crimes. Let’s not romanticize those days just because we don’t like Trump, as Ring of Fire’s Farron Cousins explains.

According to a recent report in the National Journal, George W. Bush apparently likes to joke with his friends and colleagues, and occasionally sometimes reporters saying that Donald Trump is making him look pretty good.

I am assuming that George W. Bush has basing his new found, I guess you’d call it stardom on the facts that polls have shown that his approval rating has almost doubled in the time since Donald Trump was sworn in as president of the United States.

Here’s the problem that I have with this. Everyone, including Democrats, registered Democrats, who now have an overall favorable view of George W. Bush, they’re forgetting all of the atrocities that this man committed just because they don’t like Donald Trump.

You could compare anything to Donald Trump, at this point, and the other thing that’s not Donald is always going to look better, but that doesn’t mean it’s something that we should approve of, or think positively about. That’s the case with George W. Bush.

George W. Bush committed war crimes. He did at Abu Ghraib, he did at Guantanamo Bay, and he did at countless CIA black sites across the planet. That’s not exactly the kind of guy that we should be looking back on and saying “You know what? Maybe he wasn’t that bad.”

Hundreds of thousands, if not millions, of people in the Middle East dead because of George W. Bush’s war based on lies. Can we stop this [romanitization 00:01:34] of George W. Bush suddenly thinking that maybe this guy wasn’t all that bad, he was. He was horrible.

George W. Bush does not deserve to be admired. George W. Bush is not a guy that we should look back at and say “Ah, those were the good old days.” Remember when he deregulated Wall Street to the point that they committed all these crimes and then ended up throwing this country into a massive recession? What a great time to be alive, right? All those people killed in those Middle East war. All those people tortured illegally across the globe.

His Attorney General, and Assistant Attorney General, and legal counsel writing those memos that somehow legalized torture, even though that was illegal. Scooter Libby getting arrested, all that. Weren’t those great times for American citizens? No. That’s what we’re forgetting about the George W. Bush administration.