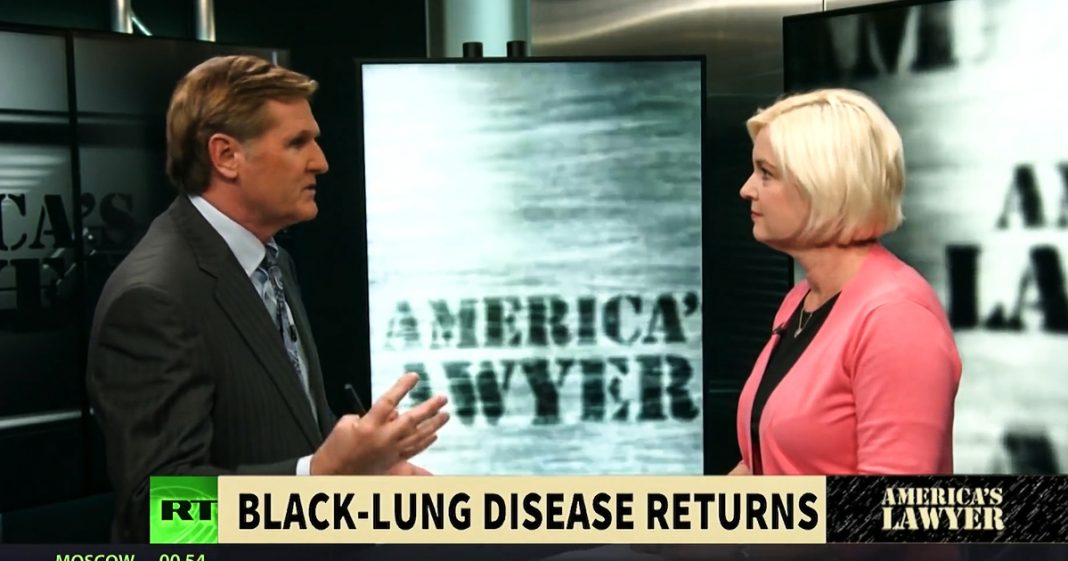 Via America’s Lawyer: Mike Papantonio is joined by Mollye Borrows to talk about the alarming re-emergence of black lung disease.

Mike Papantonio: Health professionals are reporting that advanced black lung disease is reemerging at rates never before seen by the scientific community. From the 1970s going into the late 1990s reports of black lung were steadily declining but since then there’s been a dramatic comeback especially in the last five years. Joining me now to talk about that is Mollye Barrows, legal journalist for the Trial Lawyer magazine.

You know Mollye, first show segment we do has to do with debtor’s prison. Now we see we’re going backwards with the health of miners which for the 20s and the 30s was a disaster with black lung disease. If you look at the composite of these stories. We continue to move backwards and this is story that’s kind of one of the indicators. Tell me, what are the findings in this report?

Mollye Barrows: Well it’s extremely interesting because like you said, it was such an issue for so many decades and in 1968 they passed a law that basically held the mining industry accountable for doing more to protect its miners. So they saw a decrease in on the job accidents and they also made some headway when it came to a worker’s health long term. Making sure they get proper testing in this, that and the other. During the years, over the decades when they tested from say 1970 when this rule took affect to the 1990s you saw a decrease in cases being reported because there was also regular enforcement of the rules that allowed these folks to get tested and created less harmful working environments if you will.

But, what we’re seeing now with a rise of cases in 2000 and now in this decade, there are conflicting numbers but between government agencies as well as independent agencies, they’re finding upwards of a 1,000 cases of black lung which is a generic term that really covers several diseases that are related to breathing in coal dust into your lungs. Basically there’s a number of factors that play into this but the mining industry not abiding by rules is certainly plays no small part.

Mike Papantonio: To me this story, this is a big story, obviously black lung increase. But I think it’s pardon the pun, but it kind of the canary in the mine isn’t it? It has to do with our entire culture. We’re not moving ahead in things like this. We’re moving backwards. Like I said, we started off this show doing a segment on debtor’s prison. Now there was one time when we had a huge black lung problem and we solved it in United States and now we’re going backwards again. Third worlds are even doing as well as we’re doing in that regard. Is there any idea what set this coal industry’s response to this as well? What are they saying?

Mollye Barrows: Just like with your debtor’s prison story, just like so many of the regulation stories that we cover, it goes back to people cutting corners. And so they’re basically they don’t know. They’re still basically trying to get to the root cause and determine, point a finger directly at blame. But so far what many believe is that it’s longer working hours, so the remaining, you have an industry’s that’s basically being downsized, hundreds of coal mines have closed, hundreds of miners are now out of work so those that do have jobs are working longer hours. There aren’t as thick of a coal stream or seam is what they call them, you have smaller coal seams so when they dig for this stuff it’s not just coal dust they’re breathing, it’s rock and it’s silica so it’s creating a more deadly combination to create a resurgence in these diseases.

Mike Papantonio: Arguably in the 30s, 40s and 50s there were some regulations that gave coal miners some protection but this is across the board. This is not just in the coal mines. The regulations have to be enforced.

Mike Papantonio: You have to have a culture and a society that says, “Regulations matter where it comes to human health.” And as I look at this story, there’s no way that I can look at this and not say there are bigger issues here and it shows that we little by little are just turning it into this third world banana republic. This is how we judge how we’re doing as a culture and as a society. And this is just one more story, just like the debtor’s prison that makes you really ask that question.

Mollye Barrows: If companies did the right thing because it was the right thing to do instead of looking for opportunities to cut corners at the cost of human life and health we wouldn’t be talking about this right now. The rules are in place to protect people. They’re looking for ways to not abide by them.

Mike Papantonio: It is a race to bottom and there’s plenty of people in the regulatory industry that are more than willing to help. Thank you.