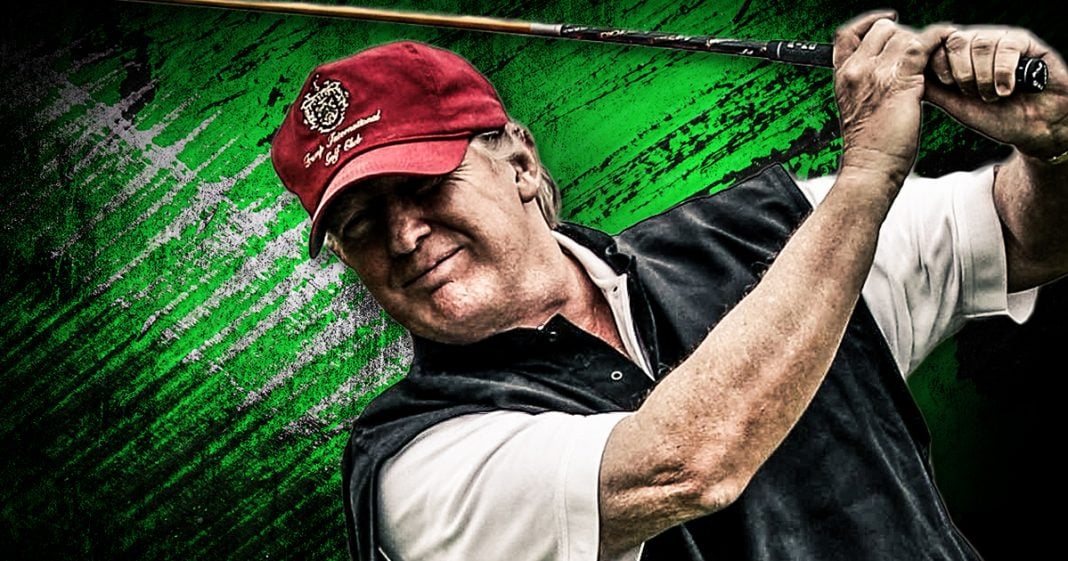 Donald Trump just hit a major milestone for his presidency, celebrating his 100th trip to play golf since being sworn in. This means that the President has spent nearly 25% of his days as president on the golf course at a combined cost of more than $56 million. This money came from the taxpayers, and since Trump loves to play at his own courses, a lot of that money goes right back into his pockets. Ring of Fire’s Farron Cousins discusses this.

This past weekend Donald Trump hit a milestone for his presidency, spending his 100th day at a Trump owned golf course here in the United States. And considering the fact that he had been in office at that point 406 days, I believe, give or take a day, that means that he has spent just a slight percentage under 25% of his presidency at a golf course that he owns.

Now I’m sure we all remember when Donald Trump came into office and said, “I’m going to be so busy, I’m not even going to have time for golf.” And yet now we have proof, we have statistics that show that this man is going golfing on average once every four days. I’m sure a lot of American citizens would love to have that kind of freedom, to go play golf one out of every four days, or at the sport of their choice, or choose to do absolutely nothing.

But Donald Trump is supposed to be the President of the United States. He is supposed to be working. He’s supposed to be doing things like, I don’t know, maybe preventing Russia from meddling in the next election, and instead he’s wasting his time on the golf course, because that’s all he knows how to do.

But there’s a more important part to this story. It’s not just that he’s golfing all the time, and not doing his job, that would be fine. I have no problem with this man going out and golfing on his free time, because it prevents him from destroying the country. But the other part of the story is what is so damaging, and this is what I have a problem with. The fact that we, the taxpayers of the United States, have had to spend more than 56 million dollars on Donald Trump’s golf outings since he became president. 56 million dollars for this jackass to go play golf at his own properties. He gets the money back.

That money that we’re spending, a lot of it, not all of it, because some of it’s for the cost of flying Air Force One, but a lot of it goes right back into his own pocket. So not only is he not doing his job, but he’s bilking taxpayers and getting paid more money to not do his job. Again, an arrangement that I think a lot of Americans citizens would absolutely love to have. But we don’t, because we have to work for a living.

We have to wake up every day, go in to work, work eight hours or more, just to make ends meet, while you, allegedly already sitting on billions of dollars, are taking money out of our paychecks in the form of taxes, putting it back into your own properties so you can go play golf, and then you’re getting it once your company divides up revenue. Goes back into your bank account.

I have a very real problem with money coming out of my weekly paycheck to go back to you to play golf. And again, pretty sure a lot of American citizens have a big problem with that as well. Not only that, think of all the kids in this country that go hungry every single day. We have millions of them. The UN recently said that certain areas of the state of Alabama are among the worst in terms of poverty in the world. Basically, the state of Alabama, and I don’t mean this as an offensive comment to people in the state of Alabama, this is according to statistics, they’re a third world country at this point.

Many areas don’t even have running water, or water that’s clean enough to drink when it comes out of the faucet, and instead of doing something about that, instead of doing something about the water in Flint, Michigan, instead of restoring power to the hundreds of thousands of Puerto Ricans who are still without electricity, we’re spending that money so Donald Trump can go play golf at his own golf courses, so that he can pocket that money for himself.