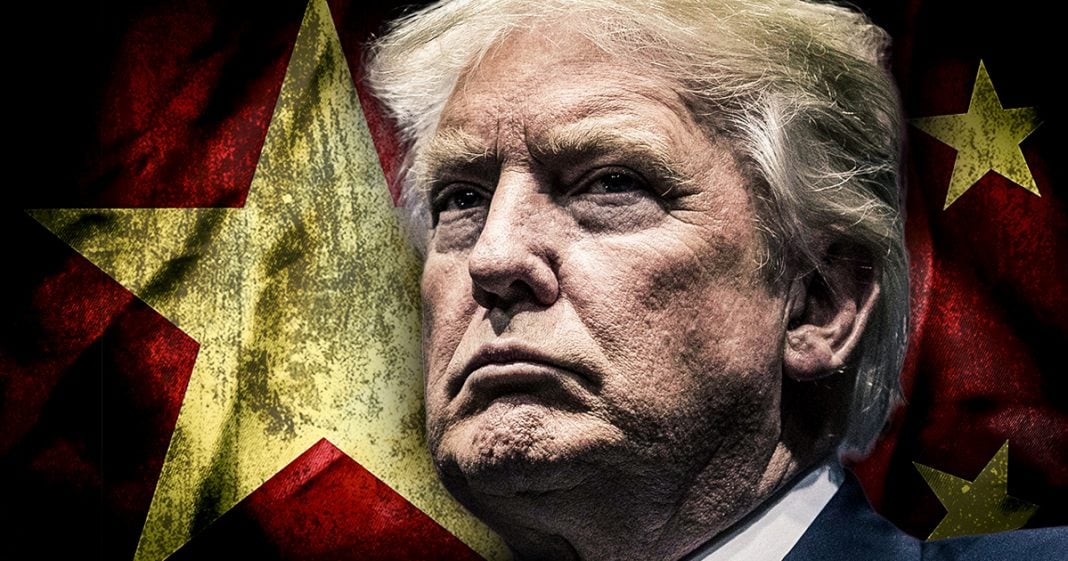 On Saturday during a fundraiser at Mar-a-Lago, Donald Trump praised the Communist President of China’s recent decision to abolish Presidential term limits, saying that “maybe we can give that a try someday.” Conservatives claim that the President is joking, but he’s shown repeatedly that he is very fond of dictators and admires their styles, so the odds of this being a one-off comment by Trump are incredibly slim. Ring of Fire’s Farron Cousins discusses this.

But he is the kind of guy that I don’t think is joking about this. I don’t want to sound like a crazy conspiracy theorist because, again, there’s no way in hell he would ever be able to do this. But if he was joking, he was only half kidding to kind of gauge the responses of those people in the room. Donald Trump 100% would love to be appointed president for life, and this is a very scary statement to have to make. Not just because Donald Trump wants to be a dictator and this is one of the reasons we know he wasn’t fully kidding it’s because Donald Trump has always spoken admirably about dictators or presidents for life across the globe. Dotart. Now we got the president of China and several others that Donald Trump … He just likes their ways. Oh, you’re just killing people with drug offenses, maybe we should try that here. That’s something he has suggested. Now he’s suggesting we do away with presidential term limits and have somebody be president for life.

Later on in this little fundraiser they had in Mar-a-Lago, Rudy Giuliani was there for some reason. He had the gale to go up there in his little speech and talk about being there for Trump’s wedding. Hillary Clinton was there too. She actually managed to fit through the door. So Rudy Giuliani after Donald Trump’s president for life statement decided to make a fat joke about Hillary Clinton, who’s really not in that bad of shape to begin with, so I have no idea where in the hell that came from. Not to mention the fact that if you’ve seen guys like Rudy Giuliani and Donald Trump, they’re in no position to ever criticize the way any other human being looks or feels or acts or walks or what they weigh. But that’s what you get from these people. They’re not serious about governing. They admire dictators. They make fun of people’s weight, even when they don’t have a weight problem. They’re horrible human beings really is what happened.

That’s what happened at Mar-a-Lago this past weekend. It was a gather of assholes. More assholes than you could fit into one single room, but somehow they managed it there at Mar-a-Lago. I hope they had somebody come in with a disinfectant afterwards and scrub that room down because I have to imagine it was pretty slimy after all those disgusting human beings were crowded in there at this speech.

But back to the original point, Donald Trump wants to be president for life. I do not believe that he is joking about this. I believe he said it to gauge the responses of everybody in that room, and based on what we know, this was a closed door meeting. This was all leaked to the press. The people in that room didn’t seem to have too much of a problem with it.