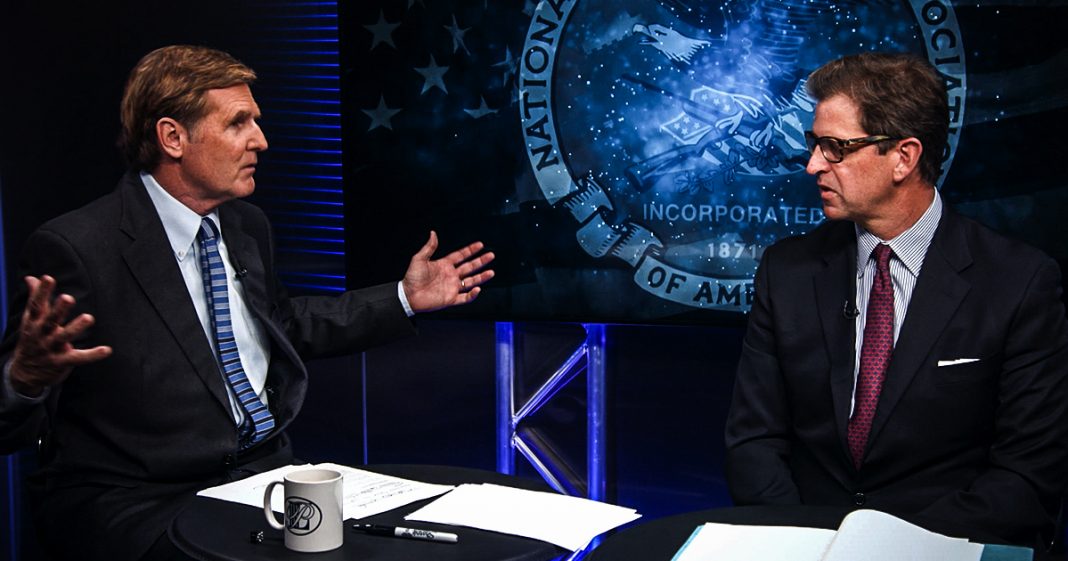 Corporations are ending their partnerships with the NRA after the latest mass shooting and the NRA’s complete lack of common sense on gun control, and now the Lieutenant Governor of Georgia wants to punish corporations who are punishing the NRA. Ring of Fire’s Mike Papantonio and Peter Mougey discuss this.

Mike Papantonio: I love this. I love what happened with this Georgia Governor. The Governor comes out and he says to Delta Airlines, they’re in Georgia. They’ve got, what, 30,000 employees in Georgia?

Mike Papantonio: So Delta says we’re gonna end the contract that we have with the NRA where we fly your people to the annual convention for less money and some other things that we do for them. We’re gonna kill that contract. This Governor, this Casey Kagel who is a absolute nutcase by the way. Just Google the guy, you’ll see plenty of really nutty stories about this guy. He comes out and he says, “Well, if you do that I’m gonna dry up your tax base.” I mean, your tax base in the sense that we give you all kinds of breaks.

Mike Papantonio: And we’re gonna take those breaks away. You’re not gonna get these tax breaks anymore. What is your take on this case?

Peter Mougey: Well, first of all, you’ve got to applaud Delta. I mean, just to even just stand up and say, “We’re not going to help push the NRA’s agenda. We’re not gonna give ’em any breaks.” I’ll tell you what, for any legislator to use their power to enforce their own position on the NRA against a business as large as Delta, it quite frankly shows you why we’re in the position that you are. That you can go buy an automatic rifle from one of these huge stores because everyone’s afraid of what the retaliation’s gonna be.

Mike Papantonio: Okay, let’s talk about this a little more though. I mean, you know, first of all, I really hope he pushes this because 33,000 voters-

Mike Papantonio: -employees with Delta and you know that they’re gonna be motivated to vote. This guy needs to be voted out. He’s a complete utter freak.

Peter Mougey: But he must think that by him doing this that he’s actually gonna charge up his voter base.

Peter Mougey: Absolutely. I mean, they’re there to protect the minority.

Mike Papantonio: And we don’t agree with what we’ve been doing in the past and that’s giving the NRA people a break on their travel. We have the right to express that belief and that statement. So what they say is, “You know, we’re not gonna do it anymore.” When a Governor believes that he can then interfere with that constitutional right and he then shows we’re gonna punish you for your First Amendment right. That is a whole different level of scrutiny that the court looks at when they say … this could end up actually with sanctions to the Governor. I kind of hope he pushes this because he’s a terrible- this guy is a freak. I’m telling you, go look at Casey Kagel, Republican in Georgia. You’re gonna see the guy’s got a history of nuts.

Peter Mougey: Think about what his next step is now is it Dick’s Sporting Goods that just came out that we’re not gonna sell anymore automatic rifles and he says, “You know, I don’t like that.” I tell you what, I’m gonna do the same thing I did with Delta. I think you should be able to buy automatic rifles at Dick’s, we’re gonna take away some of your tax incentives that we gave you for buying property and you need to sell automatic rifles. That’s not what his job is to push his own political agenda and shove that First Amendment right down Delta’s throat or if Dick’s wants to stop selling automatic rifles that he can push that agenda. That’s not what he’s there for, not what he’s intended to do.

Mike Papantonio: Yeah, as you see these stories, you’re gonna see a lot more corporations … what happened, and I love this part of the story, is on the internet now you can go to ThinkProgress.

Mike Papantonio: ThinkProgress gives you a list of people depending on what your feeling about guns are, I mean you may be a gun lover. Well, that’s your right, but there are people who disagree with basic things like there ought to be a cooling off period when somebody buys a gun. You ought to be able to be mentally sound before you buy.

Mike Papantonio: You shouldn’t be able to be 15 years old and go buy a gun.

Mike Papantonio: Common sense. But ThinkProgress, they put together a really good list that you can go look at and you can say these are corporations that are so tied with the hip to what the NRA is doing and I disagree with what the NRA is doing on these things and you make the decision, I don’t want to do business with those corporations. I think it’s extremely important that those types of things that social media gets those kinds of things out. Can you imagine corporate media trying to accomplish that?

Peter Mougey: No, absolutely not and I hope Delta gets a surge in profits for taking a stand and it backfires on them.

Mike Papantonio: My take is that that’s exactly what’s gonna happen. The momentum right now that’s picked up with people saying, “Enough is enough.” The only problem is you actually don’t have legislators around, so few of them have any courage whatsoever. That’s showing through here. This is such a critically important … you know, the legislators in Florida they’re running for the hills. There’s no discussion about it, Republicans aren’t talking about it. When Democrats talk about it they sound stupid in the way that they talk about it. There’s some very serious things that can be done.

Mike Papantonio: How about requiring insurance when somebody has a gun? Insurance covers the person with the use of that gun because that’ll close things down twice.