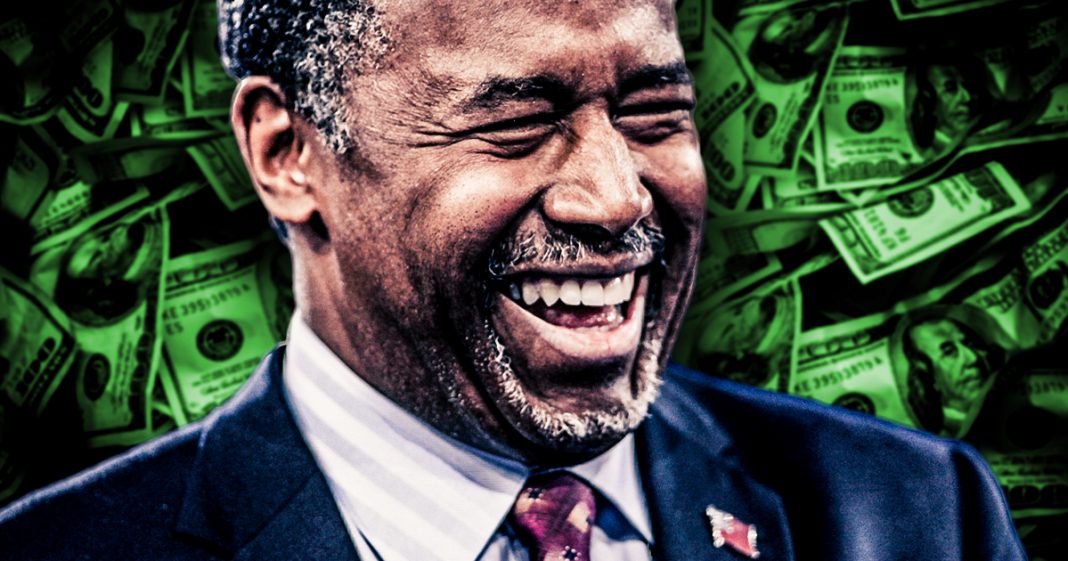 Ben Carson is spending more than $100,000 worth of taxpayer money to turn his offices into luxury suites, complete with designer furniture and tens of thousands of dollars in dinnerware. This is happening at the same time that the agency, and the government as a whole, is scaling back their spending on vital services for needy American citizens. Ring of Fire’s Farron Cousins discusses this.

The Department of Housing and Urban Development, run by Dr. Ben Carson, has announced that they’re going to have to cut their budget by about $6.8 billion in the United States. Which means, that they have to cut back money that is spent on public housing projects. You know, the housing projects that are meant to put low income Americans into a home instead of having them live on the street. $6.8 billion is going to be taken away from that agency that Ben Carson is running. But at the same time, Ben Carson himself, according to new reports, wants to spend close to $200,000 turning his office at HUD into some kind of luxury suite to impress people who come in.

According to reports, Ben Carson has spent $165,000 so far on furniture for his office. Luxury furniture. Couches, credenzas, just to give people the impression that, “Wow, there’s a lot of money being spent here!” Furthermore, his office has spent $31,000 on a dining set for the office. $31,000 worth of silverware and plates for Ben Carson at his office.

Millions of Americans are sleeping on the streets every single night, and Ben Carson, in charge of the government office that’s supposed to do something about this, just spent $31,000 on plates for his office! I mean, first and foremost, is he holding like grand dinners in his personal office? I don’t think so. I don’t understand why this purchase would even come close to being necessary. If it’s because he wants to maybe have a pizza party for his office, you can go to the grocery store and spend $5 on some paper plates. You don’t need $31,000 worth of fine china to do something like that.

Ben Carson is an absolute disgrace to the United States of America. He is a disgusting human being that does not deserve to be in that position of power because one, he doesn’t understand what the hell he’s doing. He spent his career as a doctor, not somebody in charge of public housing, or understanding what most Americans are going through, and I know what he was younger his family had financial troubles, I understand that. But those days are long behind him, this is a man that tells us that poverty is just a state of mind. He doesn’t get what’s happening to people in this country, but more importantly, he doesn’t care. Anybody who would spend $200,000 on furniture to make their office look nicer while their office is cutting nearly $7 billion in funding from getting people off the streets, they don’t deserve to have a job in our federal government. But that is exactly what we have come to expect from people within the Trump administration.