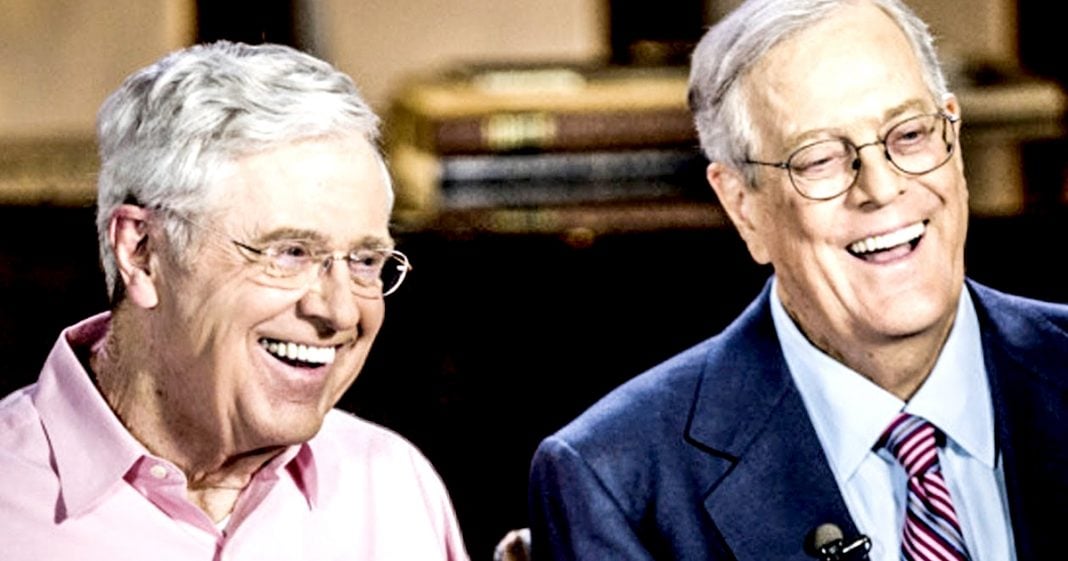 If you had any doubts about who the Republican Party truly represents, take a look at a recently-leaked document obtained by The Intercept that shows wealthy Republican donors the Koch Brothers celebrating the massive victories that they’ve scored in the last year. These include the tax cut package, the rollback of environmental regulations, and many more policies that are going to harm the American public. Ring of Fire’s Farron Cousins discusses this.

In case you have any doubt in your mind about what Republicans in the United States actually stand for, take a look at this. According to a leaked document obtained by The Intercept and the site Documented, the Koch brothers sent out a laundry list of accomplishments that they had managed to get out of Republicans in 2017. Among those accomplishments are, obviously, the tax cut package, which greatly benefits the wealthy and corporations, but a little further down the list they talk about their real goal. It wasn’t just tax cuts, it was the destruction of regulations designed to save American lives.

The document goes a little bit further, though, because it talks about some of the things that the Koch brothers did to make sure that they got all these things, specifically the tax cuts. The Koch network claims that it organized over 100 rallies in 36 different states, contacted over 1.8 million activists, and knocked on over 33,000 doors just to get that tax cut package passed, and to get the public to support it. They also admitted to spending millions upon millions of dollars running ad campaigns in states to convince people that we needed to cut taxes for the wealthy.

At the time it wasn’t working, but unfortunately, according to the latest polls, majority of people in this country actually support the Republican tax package. They’ve bought into the lies that it’s somehow going to help them, even though corporations themselves have admitted we’re not giving that money back to you, workers. We’re going to give it to our shareholders and our CEOs. They’ve said that. The American public just wasn’t listening.

The Koch brothers know it. The Koch brothers understand it, so do all other wealthy Republican donors, and even Republicans in Washington, D.C. who passed this legislation. They know exactly what they’re doing. They know exactly who it’s going to benefit, and they don’t give a damn if it helps the average American citizen. And certainly, rolling back these environmental protections is going to do nothing to help American citizens. We’re the ones who are going to develop cancer from it, or asthma, or other breathing illnesses. They’re the ones who are going to pocket extra cash.